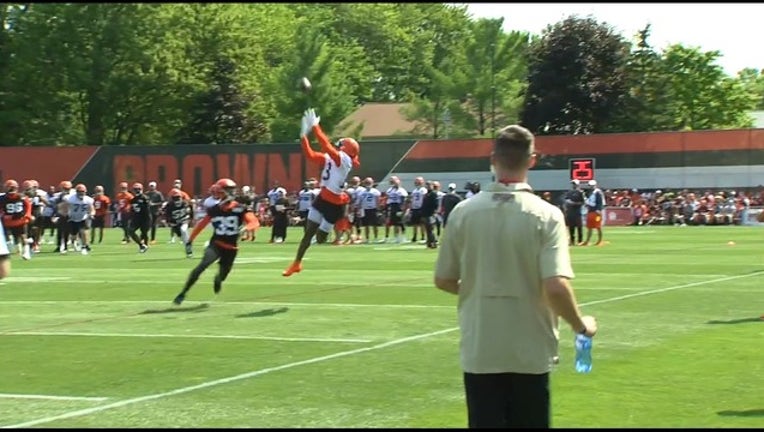 BEREA, Ohio (AP) - Odell Beckham Jr. made himself right at home on the opening day of Browns training camp.

The three-time Pro Bowl wide receiver made a pair of highlight-reel catches on throws from Baker Mayfield, delighting a capacity crowd that was lined up outside the gates several hours before they opened Thursday.

"I feel like I belong here already," Beckham said, breaking into a smile. "But I still don't have a house yet, so if anyone has any suggestions on where to live, let me know.

"You could feel the hunger to win and the warmth from the fans out there. I do love the love and I'm just happy to be in a situation where I can give love back."

Cleveland fans' crush on Beckham began as soon he was acquired in a March 13 trade with the New York Giants. His No. 13 was Nike's best-selling jersey over the next 2 1/2 months nationally, four spots ahead of rising star Mayfield, according to the NFLPA.

Their popularity was reflected in the stands at the Browns' training facility, as seemingly every other fan was wearing Beckham or Mayfield apparel. Though Cleveland went 7-8-1 last season and hasn't made the playoffs in 17 years, "OBJ" has ignited unbridled optimism.

"I think Odell should feel the love from the fans because they showed it to him," coach Freddie Kitchens said. "The passion in the Cleveland area for the Browns - and from all Browns fans - is very unique. I think that was demonstrated today and will be demonstrated the rest of training camp."

Kitchens designed a pass play to Beckham on the initial snap of 11-on-11 drills, then had Mayfield continue to feed him for the remainder of the 2 ½-hour practice.

The 5-foot-11, 198-pounder earned the loudest cheers of the morning with a juggling, one-handed sideline catch while being blanketed by starting cornerback Terrance Mitchell. He later went over the middle, between defenders, to haul in a touchdown while sliding to his knees.

"It is kind of a security blanket having Odell," Mayfield said. "The one throw on my left, it looked like he kind of double-jumped because he had another jump in the air. We talked about it in the spring; he is just a special individual who can do things like that."

Beckham is aiming to prove his value to the team off the field, as well, by taking an active leadership role. Kitchens praised his ongoing effort to build relationships and is encouraging him to share his knowledge with younger players.

It's a dramatic change from the egocentric image Beckham earned over five seasons with the Giants, but one that the 26-year-old desperately wants to make.

"I'm blessed, God gifted me with some gifts," he said. "Whenever I go to eat in the café, I sit with a different group of people to talk and communicate and get to know these guys. I'm excited to be able to learn new faces because these are the guys you battle with, and you will forever remember and cherish them."

Browns general manager John Dorsey is seeking to add another significant name to the roster as Pro Bowl defensive end Mike Daniels visited the team one day after being released by Green Bay. Cleveland has 2017 top overall draft pick Myles Garrett and Pro Bowl selection Olivier Vernon, acquired in the Beckham trade, at the position, but Dorsey said a team can never have too much talent.

NOTES: Oklahoma product Mayfield was asked to reveal the most important lesson he learned in college. "Don't run from the cops," he deadpanned, referring to his 2017 arrest for public intoxication and fleeing the police in Fayetteville, Arkansas. . Mayfield has mended fences with disgruntled RB Duke Johnson, whom he sharply criticized after demanding a trade. "We addressed it," he said. "We're going to handle it like professionals." . RB Kareem Hunt (groin) is expected to practice within a few days, according to Kitchens. The former Chiefs standout, who is facing an eight-game NFL suspension, was placed on the active/non-football injury list Wednesday.