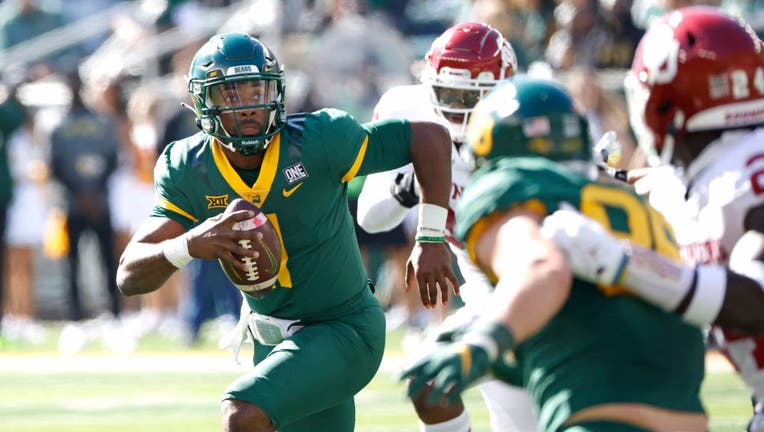 WACO, TX - NOVEMBER 13: Gerry Bohanon #11 of the Baylor Bears looks to pass against the Oklahoma Sooners in the first half at McLane Stadium on November 13, 2021 in Waco, Texas. (Photo by Ron Jenkins/Getty Images)

Abram Smith had 148 yards rushing, including a 75-yard scamper to set up the first of Bohanon's rushing TDs in the fourth quarter, and the Bears (8-2, 5-2 Big 12, CFP No. 18) rebounded from an unexpected loss last week at struggling TCU.

The Sooners (9-1, 6-1, CFP No. 8) were held to 260 total yards, their fewest ever with Riley in his five seasons as head coach and two seasons as offensive coordinator before that. It was their fewest points in a regular-season game since a 48-14 home loss to Baylor in 2014, which came weeks before they ended that season with a 40-6 loss to Clemson in the Russell Athletic Bowl.

Oklahoma lost in November under Riley for the first time.

Baylor fans stormed the field when they thought the game was over, but there had been a timeout, and 3 seconds remained. Pretty much all of Oklahoma's team had left the field and it took several minutes to clear the field.

After an extended discussion among the referees, and an irate Sooners coach Lincoln Riley, the defense returned to the field for the final snap. That was a 32-yard field goal by Isaiah Hankins for scoring that could come into play in a Big 12 tiebreaker, and the fans then swarmed the field again.

Oklahoma freshman quarterback Caleb Williams, who had been so dynamic since leading a big comeback against Texas last month, threw two interceptions. Preseason AP All-America quarterback Spencer Rattler, who he had replaced as the starter, took over late in the third quarter.

Williams had a 2-yard TD run early, but finished 10-of-19 passing for 146 yards while getting sacked three times. Rattler was sacked twice as well, and Williams returned to complete three passes for 74 yards on a late drive before Kennedy Brooks' 1-yard TD with 2:26 left.