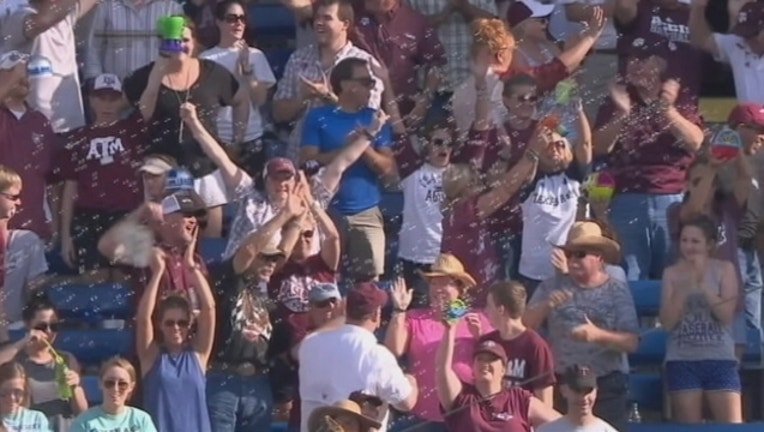 HOOVER, Ala. (AP) — Texas A&M took its lumps after joining the Southeastern Conference. On Sunday, the Aggies were the ones delivering the hits.

The Aggies (45-14) had posted losing league records their first two years in the SEC before turning it around the past two seasons.

"We got a lot of bruises, a lot of scars trying to figure out what it takes to win at this level, in this league week in and week out," Texas A&M coach Rob Childress said. "It's nice that they got a dogpile there at the end."

Texas A&M, the SEC's No. 1 hitting team, scored four runs in the seventh inning and five in the eighth to rout the top pitching staff. Moss hit a two-run double and a three-run double in the two big innings.

Banks belted a two-run home run over the right field fence in the seventh, following a solo shot in the third. He was named the tournament MVP after hitting three homers on the week.

"Coach tells us before the game that it's going to take 1 through 9 (in the batting order)," said Moss, who had three hits and scored three times. "And when we're able to do that and stay committed 1 through 9, I think we're the best offense in the country. I think we showed that the last couple of days."

SEC pitcher of the year Logan Shore started for the Gators (47-13) but went only one inning, allowing a run. It was his only outing of the tournament but coach Kevin O'Sullivan said he'll be ready for a regional..

"He's fine," O'Sullivan said. "I just decided to take him out at that point, but he'll be able to go Saturday or Friday."

In a game where the teams combined to send 11 pitchers to the mound, Andrew Vinson (4-2) dominated for Texas A&M at the end. Vinson pitched three innings without allowing a hit or walk to end the game for the Gators, striking out five batters.

"Andrew Vinson did a great job of stopping them in their tracks and we continued to score late in the game," Childress said.

Hunter Melton had a pair of hits and Austin Homan drove in three runs for Texas A&M.

Danny Reyes had two hits and an RBI for Florida, while also making a leaping catch at the wall in left field in the sixth.

Texas A&M also went into the final weekend in contention for the SEC regular-season title, before ending with a 3-2 loss to Mississippi.

The Gators survived a 14-inning loss to LSU Wednesday night to make it to their third straight championship game.

"I think our young players grew up quite a bit this week," O'Sullivan said.