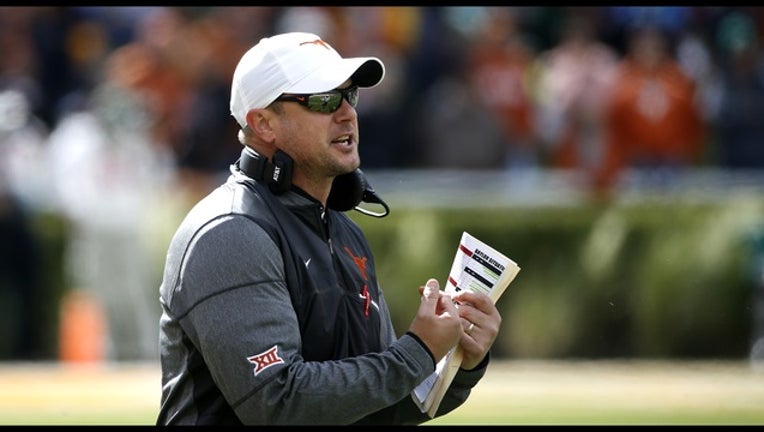 AUSTIN, Texas (AP) - Texas coach Tom Herman has a problem at running back: He is having a hard time keeping them healthy.

The No. 10 Longhorns head into their season-opener this week against Louisiana Tech with only two scholarship running backs available in sophomore Keaontay Ingram and Jordan Whittington.

And while both are expected to be the top players in the group, they have been banged up in training camp and are wearing green jerseys this week in practice to avoid contact.

"The level of concern is high. We were supposed to have five scholarship running backs," Herman said Monday.

Ingram, who had a solid freshman season and was presumed to the featured back when training camp began, has been limited by a bruised knee. Junior Daniel Young (ankle sprain) and senior Kirk Johnson (shoulder) are out for a while. Freshman Derrian Brown, a top recruit from Georgia, just arrived on campus and won't play this season after suffering a stroke several months ago.

Even Whittington, who has dazzled coaches since spring in his move from wide receiver, has struggled with occasional residual effects from sports hernia surgery in high school, Herman said.

Herman can't afford to limit either Ingram or Whittington in the offense Saturday night, even with LSU coming up in the second game. Ingram rushed for 708 yards and three touchdowns last season and had earned praise from Herman for being just as fast in training camp despite adding 20 pounds in the offseason.

"I don't know how you limit both of them," Herman said. "I don't think refs will let them wear green jerseys in the game. They have to go."

That could also mean an enhanced role in the running game for quarterback Sam Ehlinger , who rushed for 16 touchdowns last season. A tough runner, Ehlinger has also been somewhat fragile, missing several games the last two seasons because of concussion symptoms of neck and shoulder injuries.

The conversation in the quarterback room is for Ehlinger to not try to do too much.

"For three years there's been that discussion," Herman said. "He's going to do what he's going to do. The quarterback is always going to be part of the run game ... He is who he is. We're going to need him in the run game at various points during the season but you would like to keep his physicality to a minimum."

Notes: Herman said wide receiver Joshua Moore will be suspended for Saturday's game after his summer arrest on a misdemeanor gun charge. Moore was arrested in July for allegedly carrying a loaded pistol without a license. He doesn't have a court date scheduled until Sept. 23, but Herman wouldn't say if he will miss more than the first game. Moore caught seven passes last season for 53 yards and a touchdown last season but missed the final eight games with a shoulder injury