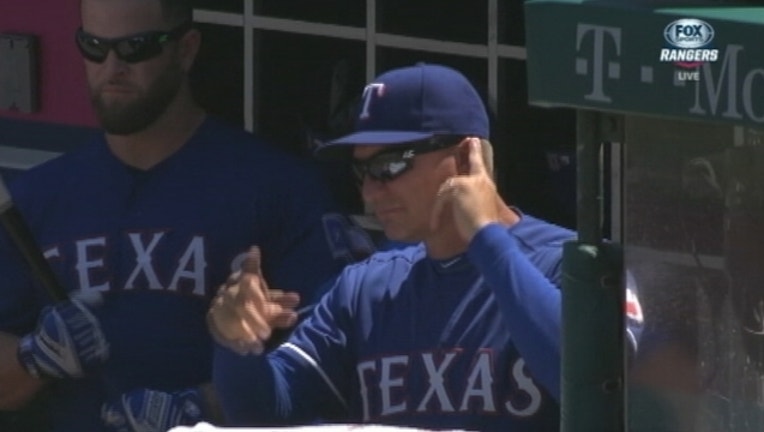 HOUSTON (AP) — Carlos Correa and Jose Altuve hit two homers apiece as the Houston Astros connected a season-high six times in a 9-7 win over the Rangers on Saturday, cutting Texas' lead in the AL West to 3 1/2 games.

The victory breaks an eight-game losing streak to the Rangers and ends a three-game skid overall for Houston, which increased its lead for the second AL wild card spot to one game over the Angels, who play later Saturday.

Chris Carter and Colby Rasmus also homered for the Astros, who are second in the majors with 216 longballs this season. The six homers Texas gave up were a season high.

The Astros trailed by 3 early before Correa's second home run, this one a two-run shot, tied it at 4-in the third. Carter's 418-foot home run to left-center put Houston on top 5-4 in the sixth and Rasmus's two-run drive extended the lead to 8-4 in the seventh.

Altuve, who returned to the lineup after being injured in a collision Friday night, got his first multihomer game when he went deep again in the eighth inning.

The Rangers scored three runs in the ninth off closer Luke Gregerson to cut the lead to 9-7 with two outs. Gregerson was replaced by Will Harris after he plunked Adrian Beltre to leave runners at first and second. Harris retired Mitch Moreland for his second save.

Collin McHugh (18-7) settled down after his tough first inning to allow eight hits and four runs in 6 2-3 innings for his fifth straight win.

Derek Holland yielded seven hits and four runs in five innings and Chi Chi Gonzalez (4-6) allowed one hit and three runs — one earned — in 1 2-3 innings for the loss.

Shin-Soo Choo homered for the second straight day for the Rangers and Moreland and Prince Fielder had two RBIs each.

Correa shook off his first career game with three strikeouts on Friday with his second multihomer game. The rookie had three hits and reached base safely on each of his five at-bats thanks to a walk and a wild pitch. His 21 home runs are the most by a shortstop in franchise history, surpassing the 20 Dickie Thon hit in 1983. The top overall pick in 2012 also tied Lance Berkman for most home runs by a rookie in team history.

He became the fifth Astro with at least 20 home runs this season, tying a franchise record last set in 2004.

Moreland drove in two runs with a double in the first inning to make it 2-0. The Rangers pushed the lead to 3-0 on an RBI single by Rougned Odor.

Astros: OF Carlos Gomez (intercostal strain) missed his 13th straight game but manager A.J. Hinch said he could return to the lineup in the next couple of days. He was available as a defensive replacement.

Rangers: Texas OF Josh Hamilton was in the starting lineup for the first time since Aug. 15. He had arthroscopic surgery on his left knee on Sept. 11 and has appeared in two games as a pinch hitter since then. Manager Jeff Banister isn't sure how much Hamilton will play in the future. "It's still day to day based off how he feels," Banister said. "We're at a point now where we need to find out how it's going to go."