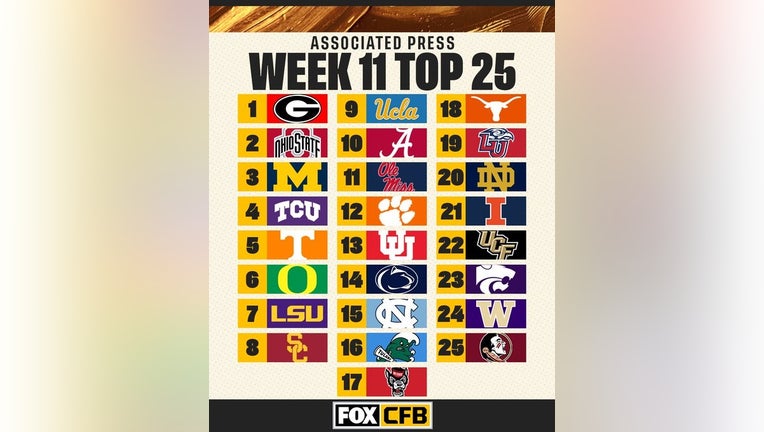 Georgia tightened its hold on No. 1 in The Associated Press college football poll Sunday, with TCU climbing up to No. 4 and Alabama dropping all the way to No. 10.

The Bulldogs had their strongest support of the season after

No. 2 Ohio State got the other first-place vote. Michigan moved up a spot to No. 3 and TCU jumped three spots to its highest ranking since late in the 2017 season.

No. 5 Tennessee fell three spots after losing on the road to the defending national champions.

For the first time in the College Football Playoff era, Alabama and Clemson lost on the same day and both tumbled in the rankings. The Crimson Tide (7-2)

LSU jumped eight spots to No. 7, the Tigers' best ranking since they started No. 6 in 2020. That was when they stumbled out of the gate a season after winning the national title.

Oregon reached a season-high No. 6 and Pac-12 rivals No. 8 Southern California and No. 9 UCLA finished out the top 10.

Clemson fell seven spots to a season-low No. 12.

Alabama held on to its top-10 ranking and its streak of weeks ranked in the top 10. The Crimson Tide has a streak of 120 straight polls ranked no worse than 10. That is the second longest such streak in the history of AP poll, behind Miami (1985-93).

— No. 18 Texas has yo-yoed back into the rankings this week and still has a chance to win the Big 12.

— No. 20 Notre Dame went from preseason No. 5 to unranked by Week Three. After taking a circuitous road, the Fighting Irish are back to being ranked.

— No. 24 Washington had a moment in September, then stumbled on the road. The Huskies are real tough at home and that's been good enough.

— No. 25 Florida State was ranked for a week in October before a three-game losing streak. The Seminoles might stick around this time.

— Oklahoma State is also out of the Top 25 for the first time this season.

— Oregon State had a one-week stay after breaking a nine-season Top 25 drought.