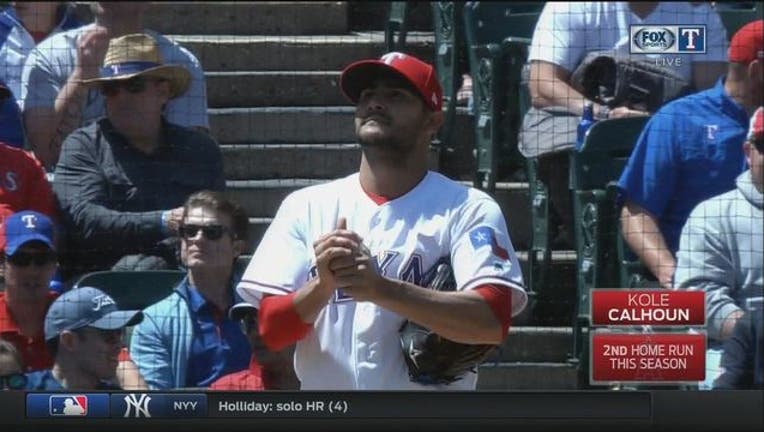 ARLINGTON, Texas (AP) - JC Ramirez intrigued the Los Angeles Angels as a possible starter if the need ever arose.

It's more than intrigue now.

Ramirez got his first win as a starter on the right-hander's fourth try after 111 career relief appearances, and Jefry Marte homered and hit a tiebreaking, two-run single to help the Angels beat the Texas Rangers 5-2 on Sunday.

The 28-year-old Ramirez (3-2) matched his career high from two starts earlier with nine strikeouts in 5 1/3 innings. He has been filling in for Garrett Richards, who hasn't pitched since leaving his first start with a right biceps strain.

"We knew he had definitely a terrific live fastball, he's got a good slider, he's got the curveball," manager Mike Scioscia said. "With that three-pitch mix, we thought that we would look at him to see if he was viable. There was a need, and he's getting his chance."

Ramirez threw seven scoreless innings in his previous start but got a no-decision. He had been a reliever for Philadelphia, Arizona, Seattle and Cincinnati in a span of four seasons when he joined the Angels on a waiver claim last June. Two of his six career wins in relief came this season.

Ramirez, who gave up four hits and two runs, struck out six of the last eight batters he faced, leaving after hitting Carlos Gomez with a pitch. Shin-Soo Choo had a solo homer during that stretch.

Bud Norris struck out four of the five batters he faced for his fifth save, including Rougned Odor with two on to end the eighth. The Rangers struck out a season-high 15 times.

Marte's two-out single in the fifth came after the Rangers gave Mike Trout a no-pitch intentional walk to load the bases and Texas starter Martin Perez (1-4) retired Albert Pujols on a popup. Marte had a solo homer in the ninth.

"We got beat today with two-out, run-scoring opportunities that they were able to capitalize on," Texas manager Jeff Banister said. "We don't do that and the other team does that, it's a challenge to win baseball games."

Kole Calhoun hit a solo homer in the third, had two hits, scored twice and saved Ramirez a run by throwing out the speedy Gomez trying to score from second on a single with Texas leading 1-0 in the first inning.

Calhoun's homer, his second, was the first by a left-handed hitter against Perez in Arlington since David Ortiz connected for Boston on May 10, 2014. Perez gave up eight hits and four runs in 5 2/3 innings.

No. 9 hitter Martin Maldonado reached base all four times for the Angels with a double, a single and two walks.

Gomez singled in the first for his fifth straight hit and reached base three times a day after hitting for the cycle.

The Rangers claimed infielder Pete Kozma off waivers from the Yankees and sent slumping former top prospect Jurickson Profar to Triple-A Round Rock. Kozma was designated for assignment Friday when New York shortstop Didi Gregorius was activated from the 10-day disabled list. Profar has made 13 starts in left field and is hitting .135 (5 for 37).

The 37-year-old slugger left the bases loaded in consecutive at-bats. After the popout for the second out preceding Marte's single in the fifth, Pujols struck out in the sixth after the second straight walk to Trout - this one unintentional. Pujols was 0 for 4 and is hitting .231 with three homers in 104 at-bats.

Each shortstop made a standout play in the late innings, starting with Andrelton Simmons when he was playing behind the bag at second and snagged Choo's liner in the seventh. Elvis Andrus robbed Trout of a bloop hit with a sprinting grab in the ninth.

Angels: RHP Matt Shoemaker (1-1, 4.73 ERA) faces Seattle for the second time this season in the opener of a three-game road series Tuesday. He allowed a season-high seven runs over 4 1/3 innings in a no-decision April 9 at home.

Rangers: Houston-area native Andrew Cashner (0-2, 2.93) pitches the opener of a four-game series at the Astros on Monday. The right-hander walked six but allowed just two runs in an 8-1 loss to Minnesota in his previous start.