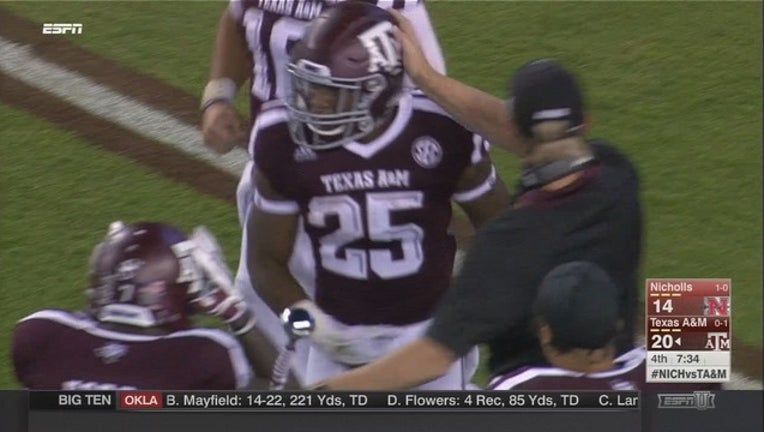 "It hurt," Kirk said, recalling the team meeting on Nov. 26 when players learned Sumlin was out. "There were a lot of guys walking out of that meeting room with tears in their eyes - and I was one of them. Coach Sumlin gave a lot of guys a chance that nobody else wanted to give them."

Over the past month, the Aggies players have had to come to grips with an uncertain future knowing that former Florida State coach Jimbo Fisher will be taking over the program beginning next season. Kirk said that means Friday's Belk Bowl against Wake Forest amounts to an audition for 2018 for many of Texas A&M players.

"You have to make a good first impression on him because he wants to see what he is working with next season," Kirk said.

Interim coach Jeff Banks will coach the game, but the Aggies are never far from Fisher's watchful eye. He's been taking in practices from afar and getting to know the team he'll inherit.

"You are evaluating guys and watching them play and seeing what their talent levels to see how you want to coach and put schemes in that feature those players," Fisher said.

Banks said players have handled the transition extremely well and are focused on the game at hand.

Still, Aggies defensive lineman Kingsley Keke said the current coaching dynamic has made for "kind of a weird feeling." The same likely goes for some assistant coaches - including Banks - who are hoping to land a spot on Fisher's staff.

Some things to look for in the Belk Bowl:

SENDING OUT WOLFORD IN STYLE

Wake Forest coach Dave Clawson would like nothing more than to send out John Wolford with a victory given what the senior quarterback has meant to the program. The four-year starter endured two tough seasons to start his career as Wake Forest allowed the most sacks in the country over the 2014 and 2015 seasons.

"He took an absolute beating for two years," Clawson said. "We couldn't protect him. ... I've seen that experience break younger quarterbacks before. It will either make you or break you. For John, it made him."

And Wolford helped bring Wake Forest's slumping program back to respectability as the Demon Deacons have qualified for two straight bowl games.

Clawson called Wolford "our typical guy," saying he's undersized and was under-recruited. He said getting a win against Texas A&M for Wolford on Friday would be like "the cherry on top."

Banks made it clear the Aggies won't hold back on bringing the pressure on Wolford. The Aggies finished tied for third in the country with 40 sacks with 8 ½ of those by defensive end Landis Durham.

Clawson said he is concerned about Texas A&M's size, speed and athleticism on the defensive front.

"If there is any disadvantage we have we are going to have to take advantage of it," said Durham.

BOTH AGGIES QBS COULD PLAY:

Redshirt freshman Nick Starkel will start at quarterback for the Aggies, but Kellen Mond could see action as well in a platoon role. Starkel is considered more of a pocket passer, while Mond is viewed as a dual threat quarterback.

"It all depends on the flow of the game," Banks said. "I think Kellen gives us something that Nick doesn't at times."

Starkel is averaging 305 yards passing per game in his three starts since returning from an injury.

Banks said he hasn't ruled out starting safety Armani Watts playing against Wake Forest despite reports that he won't play. He said Watts is healthy, but "it's just a matter of how he feels. ... We trust his opinion on how he feels and we will go from there."

Watts is second on the team in tackles with 87 and first in interceptions with four.

The game will played at the home stadium of Carolina Panthers quarterback Cam Newton, but another Cam will take center stage - Wake Forest's Cam Serigne. The senior is the ACC's all-time leader in receptions and yards receiving by a tight end and a focal point of the Deacons offense.

Look for Serigne to be a factor in the red zone. He's averaging a touchdown on one of every 4.4 receptions this season.