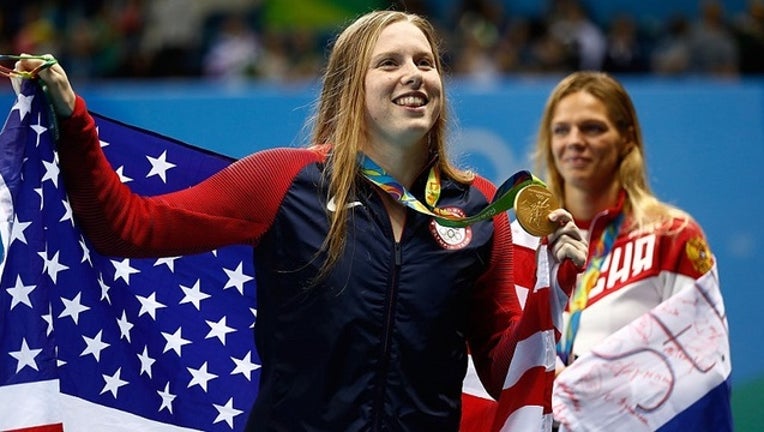 RIO DE JANEIRO (AP) — This one will surely be seen as a victory for clean athletes over the dopers.

No doubt, that was Lilly King's take.

The feisty American stared down Yulia Efimova, a swimmer at the center of Russia's doping scandal, and then beat her in the pool Monday night.

King could hardly contain her satisfaction at capturing gold in the 100-meter breaststroke — especially given who was in the next lane.

"It just proves you can compete clean and still come out on top with all the hard work you put in behind the scenes, behind the meet, at practice and weight sessions," the 19-year-old Indiana University student said giddily. "There is a way to become the best and do it the right way."

Efimova arrived in Rio as one of the symbols of the massive Russian doping operation, an athlete who had already served a 16-month suspension and tested positive again this year for the now-banned substance meldonium.

Efimova was initially banned from the Olympics, but that decision was overturned on appeal. King took umbrage at Efimova's No. 1 finger wag during the semifinals, and the bad blood carried over to the final.

After glaring at Efimova in the ready room and giving her a look of disdain on deck, King led all the way to take the gold in 1 minute, 4.93 seconds. Efimova settled for the silver, more than a half-second behind. The bronze went to another American, Katie Meili.

Efimova was booed by many in the crowd when introduced before the race, though a smattering of Russian fans cheered her on.

"I really don't know how I even reached the final," Efimova said, her face red from crying. "It would have really been the end of a fairytale, a horrible dream, if I'd won gold. But that was all I could do right now."

While Efimova hung on the rope separating their lanes in the middle of the pool, King took off in the other direction to congratulate Meili. The medalists all climbed out of the pool together, but the Americans quickly got back to celebrating on deck. Efimova walked away by herself.

Finally, as the swimmers were picking up their Olympic credentials, King gave Efimova a quick pat on the shoulder.

"I basically said what everybody's thinking," King said, adding that other swimmers "were glad I spoke out and had the guts to say that and I appreciate their support."

Efimova said she's been treated unfairly, having already served a penalty for a doping violation that occurred while she was training in Los Angeles with one of America's most prominent coaches, Dave Salo. As for the second positive test, any possible sanctions were put on hold while the World Anti-Doping Agency does more research on meldonium, which was only put on the banned list at the beginning of the year.

"Athletes used to be outside politics," Efimova said. "It's really painful for me that a lot of athletes don't understand that and just watch the TV and accept everything that's said there." She called on them "to swap places with me and understand how I feel."

King's victory highlighted another big night for the Americans, who also extended their domination in the men's 100 backstroke with Ryan Murphy's victory and wound up with six medals in all.

Murphy was fourth at the turn, but rallied on the return lap to give the Americans their sixth straight gold medal in the 100 back. Their last loss came at the 1992 Barcelona Games.

Hosszu, known as the Iron Lady for her grueling schedule, propped herself on the lane rope and made a heart sign in the direction of her coach and husband, Shane Tusup.

"I knew that I could win," Hosszu said. "But I was so tired that I told the Hungarians before the race that I could get anything from first place to eighth place."

In another result sure to stir the doping debate, China's Sun Yang captured gold in the men's 200 free. Two years ago, he served a three-month suspension for taking a banned stimulant.

Yang rallied from his customarily slow start to pass South Africa's Chas le Clos, who went out fast and tried to hang on.

Yang surged to the front on the final lap, but Le Clos still managed to grab the silver. Conor Dwyer took the bronze, adding to the U.S. medal haul.

Even on a red, white and blue night at the pool, Missy Franklin endured another stunning disappointment. The darling of the London Games failed to qualify for the final of the 200 freestyle, extending a mystifying loss of form since turning pro last summer.

Franklin finished last in her semifinal heat with only the 13th-fastest time among 16 swimmers. She actually went slower than she did during the afternoon preliminaries.

As a bubbly, 17-year-old high schooler, Franklin won four golds and a bronze at London, where she competed in seven events. This time, she struggled just to qualify for two individual events and it looks like her only realistic shot at a medal will be on the 4x200 free relay.

"It's so hard," she said, "knowing all the work you put in every day, and then to get here and be so far behind where you feel like you can be."