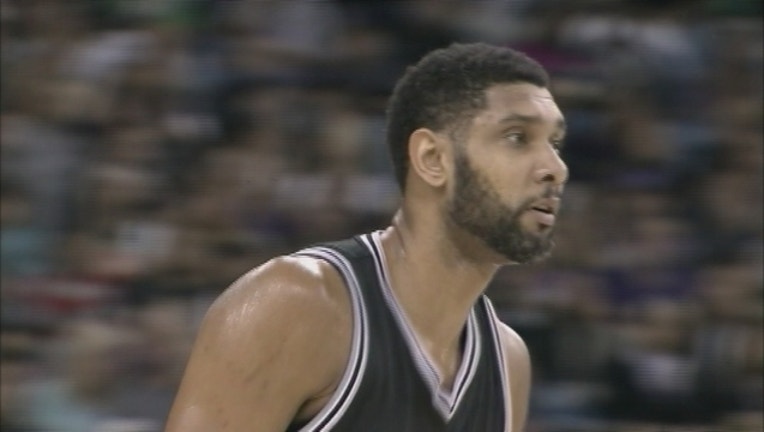 Tim Duncan spent nearly two decades as the quiet storm in the middle of the San Antonio Spurs franchise, putting the team on his broad shoulders and carrying it to heights unseen in modern American sports.

With Duncan as the focal point, the Spurs won five championships, made the playoffs in all 19 of his seasons and cemented themselves as one of the most successful sports franchises in history. And now, the tireless and reluctant superstar is finally calling it a career.

The 40-year-old Duncan announced his retirement on Monday, marking the end of an era for the Spurs and the NBA.

Duncan was the No. 1 overall pick in 1997 and teamed with coach Gregg Popovich, point guard Tony Parker and shooting guard Manu Ginobili to turn the Spurs from a solid franchise that could never quite get over the hump into one of the league's superpowers.

"The constant staple of their franchise," Cleveland's LeBron James said earlier this year.

The unassuming Duncan won two MVP awards and was one of just four players to be named NBA Finals MVP at least three times. Nicknamed "The Big Fundamental" for his clinical approach that favored bank shots over dunks, he was a 15-time All-Star, a member of the All-NBA first team 10 times and is one of only three players — joining Kareem Abdul-Jabbar and Robert Parrish — to win at least 1,000 games in his career. He is fifth on the NBA's career list in blocks, sixth in rebounds and 14th in scoring.

"Even tho I knew it was coming, I'm still moved by the news," Ginobili tweeted. "What a HUGE honor to have played with him for 14 seasons! #ThankYouTD."

NBA Commissioner Adam Silver called Duncan "one of the most dominant players in NBA history" and lauded him for an "understated selflessness (that) made him the ultimate teammate."

"For two decades Tim represented the Spurs, the city of San Antonio and the league with passion and class," Silver said. "All of us in the NBA family thank him for his profound impact on the game."

Duncan was never one for big endorsement deals or look-at-me press conferences, which is why he was often overshadowed in the public eye by more outsized personalities like James and Kobe Bryant, who also retired this year after 20 seasons, all with the Los Angeles Lakers. But he leaves this game as one of the league's true giants, perhaps the best power forward to ever play and one who left as indelible a mark on his franchise as any player to come before him.

"For us as players, we just enjoy and appreciate each other," Bryant said earlier this season. "It's not a matter of who's better or who's greater. You just accept the careers that you've had. I appreciate his career, and vice versa."

The announcement comes two months after the Spurs were upset by the Oklahoma City Thunder in the Western Conference semifinals, a six-game exit that immediately had people wondering yet again if it was Duncan's last hurrah.

Turns out, it was. And like everything else Duncan did in his career - aside from win - he retired quietly, with a statement from the team. There will be no victory lap for Duncan, no farewell tour like the one Bryant had this season. Popovich will discuss Duncan's decision on Tuesday.

The last time Duncan spoke to reporters was on May 12, when the Spurs had just been eliminated by the Thunder in Game 6 of the Western Conference semifinals. After being ineffective for most of the series, Duncan scored 19 points and teamed with fellow 40-year-old Andre Miller to trim a 26-point lead to nine in the fourth quarter before Russell Westbrook and Kevin Durant closed out the series.

There were hints in that game of Duncan's plans, even though he later exercised a contract option to clear the way for his return. He had always said that he would walk away when he felt he could no longer have a significant impact on the game, and for most of the series the younger Thunder big men had their way with him and the Spurs on the glass.

With the Spurs getting blown out and the fourth quarter set to begin, Popovich and his veteran star had a brief conversation on the bench. Duncan then played all 12 minutes of the fourth quarter without coming out for a rest, perhaps soaking up every second he could in the last game he would ever play. And when the game was over, Duncan waved to the visiting crowd and pointed a finger toward the roof as he headed to the locker room, a rare signal from one of the league's most stoic superstars.

"Timmy's never been a very outspoken or emoting sort of individual on the court," Popovich said earlier this year. "Everybody does it differently."

And Duncan was truly one of a kind.

In 1997, after an injury to star David Robinson, the Spurs plunged in the standings and ended up with a chance at the No. 1 overall pick. They won the lottery, and it was a no-brainer to choose Duncan, the polished, two-way big man who had spent four years at Wake Forest.

The Spurs won 36 more games in Duncan's rookie year than they had the previous season and were NBA champions in his sophomore campaign. They also won titles in 2003, 2005, 2007 and 2014, the last one a dominant run to redemption over James and the Miami Heat after losing to them in seven games the previous season.

For at least the last five seasons of his career, Duncan would face retirement questions. But he never really changed. You could see a few gray hairs near his temples as the years wore on, but his face, his body, his game all bore a striking resemblance to the 21-year-old who averaged 21.1 points and 11.9 rebounds in his first year in the league.

Here's how long he was with the Spurs: He had 140 different teammates there.

He was a 38-year-old All-Star in 2014-15 and even as his minutes were reduced to save the wear and tear on his body for the playoffs, he remained a force on the defensive end and on the glass. He used an exhaustive workout regimen of boxing, swimming and diet to help him keep pace with the younger, faster, stronger players that kept coming at him year after year.

The Spurs won a franchise-record 67 regular-season games this past season. Despite Duncan's individual statistics dipping to career lows, coaches and teammates said the impact his leadership, intelligence and defensive presence had continued to be elite.

And now he steps away.