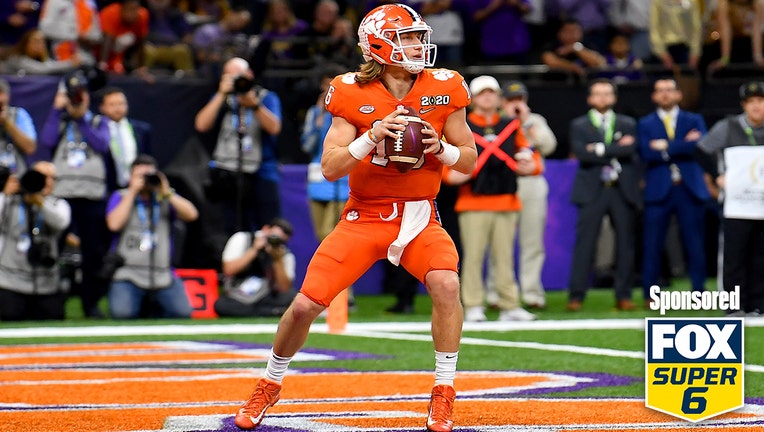 Trevor Lawrence of the Clemson Tigers sits in the pocket during the second quarter of the College Football Playoff National Championship game against the LSU Tigers at the Mercedes Benz Superdome on January 13, 2020, in New Orleans, Louisiana. (Photo

Once upon a time, it was a boring event held in a New York hotel ballroom with a few die-hard fans and lots of pizza boxes hanging around.

Now, the NFL Draft is one of the biggest spectacles on the American sports calendar ⁠— one that will be held along Cleveland’s beautiful lakefront, with thousands of football-starved fans turning the reading of names into a festival of the sport.

After the 2020 version was held in basements and Zoom rooms around the country due to the pandemic, the Midwest gets an opportunity to show its pride in the sport it helped create, starting the fire for the 2021 season.

This year’s draft is quarterback-heavy in the first round, with the potential for five signal-callers to go in the top 10. However, it will be fascinating to see how the rest of the draft shakes out, with several top wide receivers, a once-in-a-lifetime tight end prospect and a few defensive game-changers also in the mix.

You can enjoy the draft and win big with the FOX Super 6 NFL Draft Day 1 Draft-a-Thon contest on the first night of the NFL Draft. All you have to do is download the app on your phone or tablet, answer the six questions correctly and watch Thursday's festivities.

It’s easy, and it’s absolutely free. Just download the FOX Super 6 app on your mobile device to join in the fun for your chance to win $5,000.

Here are the six questions and potential answers to consider for the first round.

Which player will be selected with the third overall pick in round one?

The San Francisco 49ers moved into the top three with the idea of getting a franchise quarterback to replace ⁠— eventually ⁠— Jimmy Garoppolo. The consensus has been that they will take a quarterback from the CFP National Championship game in either Jones (who led Alabama to the title) or Fields, the Ohio State quarterback who has long been viewed as the second favorite. However, reports  Monday seemed to indicate that Lance is the other option along with Jones, which could send Fields tumbling down the board.

When will the first defensive player be drafted in round one?

There is a really good chance that the first eight picks could all be offensive players, with Trevor Lawrence going first overall to the Jacksonville Jaguars, BYU QB Zach Wilson going second to the New York Jets, the 49ers' draft selection at QB in the third spot, the Atlanta Falcons perhaps taking all-world tight end Kyle Pitts at No. 4 and the Cincinnati Bengals taking Penei Sewell from Oregon at five.

After that, the Miami Dolphins, Detroit Lions and Carolina Panthers all appear to need a wide receiver or other offensive options, if there are no trades. If the board stays as is, it is possible that the Denver Broncos at No. 9 ⁠— led by former defensive coordinator Vic Fangio ⁠— could be the most likely landing spot for the first defensive player taken. The Dallas Cowboys could follow at 10 if they don’t move up for Pitts.

How many SEC players will be drafted in round one?

It is likely that five SEC players ⁠— Pitts, Jones, wide receivers Ja’Maar Chase, DeVonta Smith and Jaylen Waddle ⁠— could go in the top 11. Patrick Surtain, the corner from Alabama, could go to either Dallas or the Philadelphia Eagles. There’s also Najee Harris from Alabama, who could be a bottom-of-the-first-round guy. In other words, this could very easily go over the nine total just on a standard first glance at team situations.

Who will draft WR DeVonta Smith?

The team that would make the most sense is Philadelphia, as the Eagles need to surround Jalen Hurts with a lot of weapons from a wide receiver corps that has become a yearly misfire for the front office. However, the Heisman Trophy winner could be too tempting to pass up for the Lions, who have lost Kenny Golladay to the Giants and need a big-play threat.

Who will be the first non-QB drafted?

All of the names listed have the chance to be franchise players. But Pitts ⁠— who evolved into the best tight end prospect in generations during his time in Florida ⁠— has made people openly drool. The Dolphins might be eager to get him, and the Falcons could surely use him if they decide not to take Matt Ryan’s replacement at No. 4. Add it all together, and it feels like Pitts is the likely first non-quarterback off the board.

How many quarterbacks will be drafted in the top 8?

Well, it is pretty certain that three are going to go, with Lawrence and Wilson locked in for the Jaguars and Jets. The 49ers at No. 3 are about a 99 percent possibility to go in this direction. The wild card is: Does Atlanta take a quarterback or flip with a team that might want one of those other QBs? Five QBs might be a stretch, but it’s not impossible.