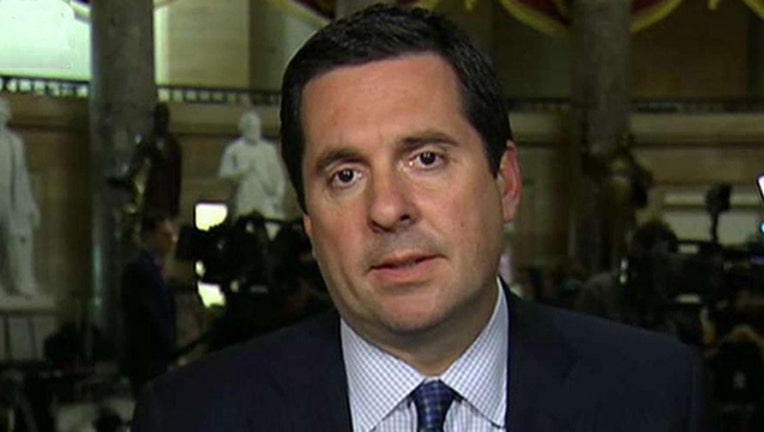 WASHINGTON - The White House refused Thursday to say whether it secretly fed intelligence reports to a top Republican lawmaker, fueling concerns about political interference in the investigation into possible coordination between Russia and the 2016 Trump campaign.

Nunes is leading one of three investigations into Russia's attempt to influence the campaign and Trump associates' possible involvement.

Late Thursday, an attorney for Michael Flynn, Trump's ex-national security adviser, said Flynn is in discussions with the House and Senate intelligence committees about speaking to them in exchange for immunity. The talks are preliminary, and no official offers have been made.

"General Flynn certainly has a story to tell, and he very much wants to tell it, should the circumstances permit," Flynn's attorney, Robert Kelner, said in a statement.

Other Trump associates have volunteered to speak with investigators, but have not publicly raised the issue of immunity.

Flynn, a member of the Trump campaign and transition, was fired as national security adviser after it was publicly disclosed that he misled the vice president about a conversation he had with the Russian ambassador to the U.S. Flynn's ties to Russia have been scrutinized by the FBI and are under investigation by the House and Senate intelligence committees.

The House panel's work has been deeply, and perhaps irreparably, undermined by Nunes' apparent coordination with the White House. He told reporters last week that he had seen troubling information about the improper distribution of Trump associates' intercepted communications, and he briefed the president on the material, all before informing Rep. Adam Schiff, the committee's top Democrat.

Speaking on Capitol Hill Thursday, Schiff said he was "more than willing" to accept the White House offer to view new information. But he raised concerns that Trump officials may have used Nunes to "launder information to our committee to avoid the true source."

"The White House has a lot of questions to answer," he declared.

Instead, the White House continued to sidestep queries about its role in showing Nunes classified information that appears to have included transcripts of foreign officials discussing Trump's transition to the presidency, according to current and former U.S. officials. Intelligence agencies routinely monitor the communications of foreign officials living in the U.S., though the identities of Americans swept up in that collection is to be protected.

Meanwhile, the Senate intelligence committee held its own hearing, a less combative affair in which Russia experts from universities, think tanks and elsewhere described a serious attempt to meddle in the U.S. election - and efforts in France and Germany as well.

Nothing to the allegations, Russian President Vladimir Putin said from the other side of the world.

Did Russia interfere in the U.S. campaign, he was asked at a forum in the northern Russian city of Arkhangelsk? Injecting a bit of humor, Putin answered by quoting George H.W. Bush from the 1992 U.S. presidential campaign.

"Read my lips: No," he said, pronouncing the last word in English for emphasis.

In Washington early last week, White House officials privately encouraged reporters to look into whether information about Trump associates had been improperly revealed in the intelligence gathering process. Days later, Nunes announced that he had evidence, via an unnamed source, showing that Trump and his aides' communications had been collected through legal means but then "widely disseminated" throughout government agencies. He said the collections were not related to the Russia investigation.

Trump spokesman Sean Spicer said Thursday the material the White House wants the House and Senate intelligence leaders to view was discovered by the National Security Council through the course of regular business. He would not say whether it was the same material Nunes had already seen.

Spicer had previously dismissed the notion that the White House had funneled information to Nunes, saying the idea that the congressman would come and brief Trump on material the president's team already had "doesn't pass the smell test." The White House quickly embraced Nunes' revelations, saying they vindicated Trump's explosive and unverified claim that President Barack Obama wiretapped his New York skyscraper.

Nunes has said the information he received did not support that allegation, which has also been disputed by Obama and top intelligence officials.

The Times reported that Ezra Cohen-Watnick, the senior director for intelligence at the White House National Security Council, and Michael Ellis, a White House lawyer who previously worked on the House intelligence committee, played roles in helping Nunes view the materials.

Cohen-Watnick is among about a dozen White House officials who would have access to the types of classified information Nunes says he viewed, according to current and former U.S. officials. He's become a controversial figure in intelligence circles, but Trump decided to keep him on over the objections of the CIA and National Security Adviser H.R. McMaster, according to the officials. They spoke only on condition of anonymity because they were not authorized to comment publicly by name.

Cohen-Watnick and Nunes both served on the Trump transition team.

Stephen Slick, a former CIA and NSC official, said it would be "highly unusual and likely unprecedented" for a member of Congress to travel to the White House to view intelligence reports "without prior authorization."

Nunes has repeatedly sidestepped questions about who provided him the intelligence reports, though he pointedly has not denied that his sources were in the White House. House Speaker Paul Ryan, in an interview with "CBS This Morning" that aired Thursday, said Nunes told him a "whistleblower-type person" provided the information.

A spokesman for Ryan later said the speaker was not aware of Nunes' source and continues to have "full confidence" in the congressman's ability to run the Russia investigation.