Among those recovering from the tornadoes Monday night is a hero father who risked his own life by covering his child to protect her from the storm while it leveled their Waxahachie home.

WAXAHACHIE, Texas - Among those recovering from the tornadoes Monday night is a hero father who risked his own life by covering his child to protect her from the storm while it leveled their Waxahachie home.

The little girl is walking away with minor scratches. The father is recovering in a hospital.

Blaise Parker described the moment her father, Rob Parker, decided to use himself as a human shield from an EF-2 tornado all to protect her younger sister, 5-year-old Paizlee.

"He knew something bad was about to happen, so he covered her body fully with his body," she recalled.

The family’s trailer home off Highway 77 in Waxahachie is now leveled and unrecognizable.

"He had wrapped her in a big blanket. My sister, wrapped her head and her body just to make sure if anything did go wrong they would be prepared in that aspect," Blaise said. 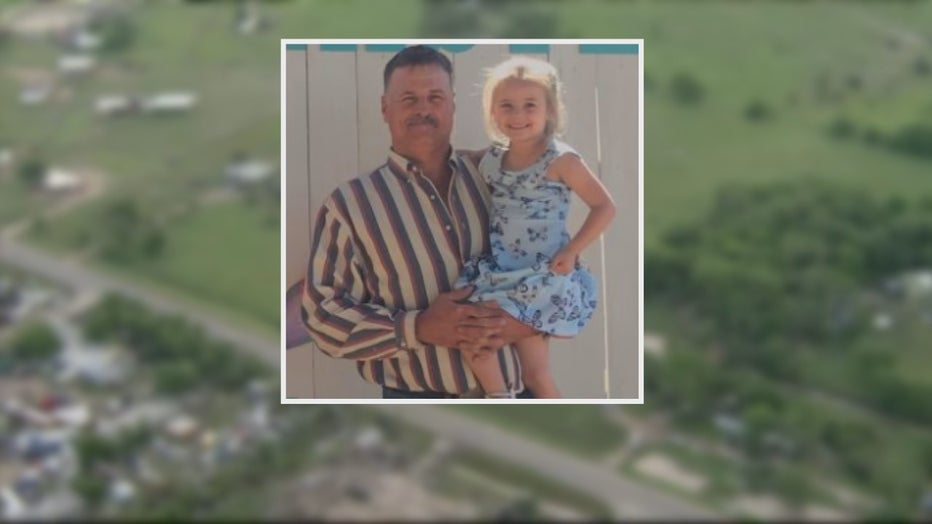 Rob was doing his best to prepare when the house started to shake.

"It was so strong that it made them fly 40 feet in between a tree and a truck," Blaise said. "And once they landed, debris hit him and cut him."

The 49-year-old father was rushed to Baylor Scott & White Medical Center in Waxahachie. Rob now has staples down his leg, stomach and on his head.

Paizlee was released from the ER after a few hours with just scratches.

"They have been through so much. It just broke my heart," Blaise said. "All of their clothes, all of their belongings are gone."

Tuesday afternoon, community members dropped off donations at the Stagecoach Cowboy Church in Waxahachie a few miles from the tornado's path.

Elder Wayne Rowe knew it was time to step up.

"We just want to do whatever we can do to help them at this point," he said. "That’s what Waxahachie is. Just a big family."

The Parkers are unable to even see where the home once stood but say they are grateful they have each other.

"I prayed so much and I just asked God watch over him and her to be safe and taken care of," Blaise said.

The church is accepting toys, clothes and shoes for the Parkers.

Meanwhile, Rob will remain in the hospital for at least the rest of the week. He is set for surgery and rehab due to the severe injury to his leg.