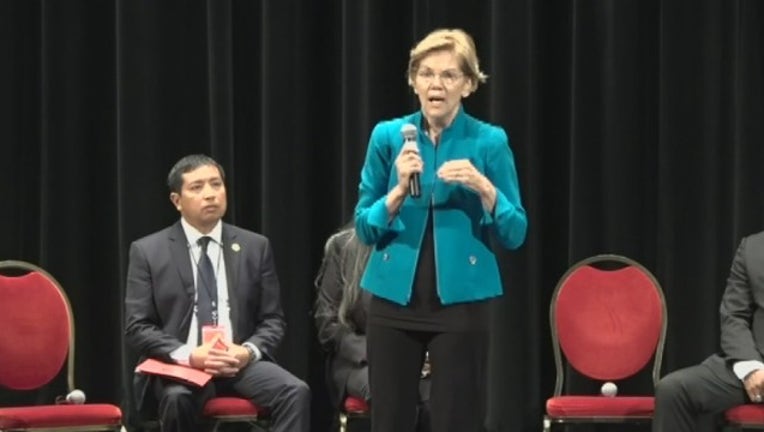 "Like anyone who has been honest with themselves, I know I have made mistakes," the Massachusetts senator said at a forum on Native American issues in this pivotal early voting state. "I am sorry for the harm I have caused."

Monday's remarks were an effort to move past the fallout from her past claims of tribal ancestry, which culminated in a widely criticized release of a DNA analysis last year. The issue nearly derailed her campaign in the early days as President Donald Trump began derisively referring to her as "Pocahontas."

Now that Warren is gaining in most polls, she's trying to prove to voters that the controversy won't doom her in a general election matchup against Trump. The detailed policy agenda to help Native Americans that she released last week helped her secure a warm reception from attendees at the tribal forum.

After drawing a standing ovation, Warren said "I have listened and I have learned a lot" from conversations with Native Americans in recent months, describing herself as "grateful" for the dialogue. She fielded questions about her proposals, which include a legislative change for a Supreme Court ruling that impedes tribal governments' ability to prosecute crimes committed on tribal lands by those who don't belong to a tribe.

She did not receive any questions about her own background.

Warren's DNA analysis - part of a broader pushback against Trump's disparaging nickname - showed evidence of a tribal ancestor as far as 10 generations back, but the Cherokee Nation joined some other Native Americans in rebuking the senator for attributing tribal membership to genetics. Warren later apologized privately to the Cherokee and had addressed her regret before Monday's appearance.

As of Monday, her campaign website's page containing a video and other materials Warren had released on the DNA analysis was no longer active.

The Native American forum this week is expected to draw 10 of her White House rivals.

New Mexico Rep. Deb Haaland, who last year became one of the first two Native American women elected to Congress, introduced Warren on Monday after endorsing her presidential campaign last month and aligning with her for new legislation aimed at helping tribal communities. Haaland lamented that Warren's ancestry has attracted outsized attention when Trump faces his own charges of racism.

Those who "ask about Elizabeth's family instead of issues of vital importance to Indian Country," Haaland told the forum audience, "feed the president's racism."

Warren's remarks were well-received by attendees at the Native American forum.

Manny Iron Hawk, 62, who lives on the Cheyenne River Sioux reservation in South Dakota, said Warren "did excellent" in her Monday appearance and has done a good job of addressing her past mistakes. "I think she did. A person has to admit their mistakes and move on."

Iron Hawk said he had hoped to talk to Warren about tribal governance issues, but she left too quickly for him to catch her.

Snuffy Main, 64, who traveled to the conference from Montana, said he doesn't think Warren needs to continue apologizing for claiming Native American heritage.

"I don't understand why she is constantly apologetic for making a mistake," said Main, who is a member of the Gros Ventre Tribe of Montana. He said he liked what Warren had to say about making sure the country honors its promises and treaties with tribes.

"If she can do even a fraction of what she promised, that would be beneficial," he said.

Gary Funmaker, 72, of Black River Falls, Wisconsin, said Warren had "good energy to her" and he didn't see much need for further apology.

"That's accepted. That's old news," said Funmaker, a Republican who used to work for the Bureau of Indian Affairs.

Later Monday, Warren campaigned in Minnesota, a state Trump hopes to take out of Democrats' column next year. The senator drew her largest crowd yet - 12,000 people, according to her campaign - to an outdoor rally at Macalester College, a private liberal arts school in St. Paul.