Volunteers, other business owners help clean up Dallas boutique after it was looted

Nearly two weeks after vandals looted a Downtown Dallas boutique, volunteers helped the owner get back on her feet.

DALLAS - Nearly two weeks after vandals looted a Downtown Dallas boutique, volunteers helped the owner get back on her feet.

Boards still cover the windows and will for a while until the owner of Guns and Roses Boutique can get restocked and the glass replaced.

But she said this experience has taught her a lot, including the fact that she’s got people of every color and every background in her corner.

Wednesday was only the third time Princess Pope, AKA “Princess the CEO,” had returned to her boutique of eight years since looters helped themselves to trendy clothes and accessories.

“When I first came in, I did a 360,” Pope recalled. “I felt violated, like somebody had broke into my home.”

Her store was looted in the early morning hours of May 30 following protests over the death of George Floyd.

“I stand with the protestors and I stand for what’s going on, and that’s equality, but looting, that is not ok,” she said. 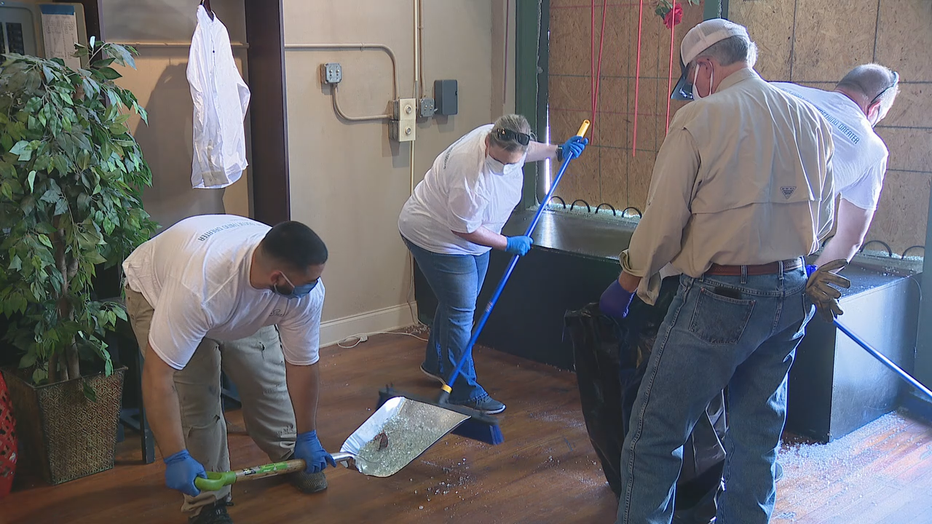 There to pick up the pieces were friends and strangers from Vista Bank, the Black Chamber of Commerce, and her neighbor, the Statler Hotel.

“Yes, I’m happy that we are here and helping out the community. I think, personally, it’s important for everyone to take a moment and focus and educate yourself and learn what’s really going on, and having the tough conversations that a lot of people are scared to have,” Statler Hotel volunteer Ashley Ayers said.

Wes Williams, a Dallas firefighter who runs nearby BurgerIM — the West End’s only black-owned restaurant and bar — was there in solidarity.

His business was hit too.

“We are in this all together,” Williams said. “And when you put out good energy, it comes back to you.”

Galen Flemons turned laboring into a teaching moment for boys Kris and Carter.

“My mother always taught us, to show love, you need to work for somebody,” he said. “To me, this is supporting the reasons for the protest, just as much as the protest itself.”

In addition to clean up help, donations are pouring in, too.

About $100,000 has been raised through online fundraisers, including financial help from Highland Park Young Entrepreneurs Club.

For Pope, the work of looters was heartbreaking, but only momentarily, after seeing the community fight for her business to survive. It was a lesson in unity that leaves lasting impression.

“The plan is to rebuild, come back bigger, bolder, and better than before,” Pope said.