New coronavirus clusters have surfaced around the world as nations struggle to balance restarting their economies and preventing infections.

LOS ANGELES - U.S. states are beginning to restart their economies after months of paralyzing coronavirus lockdowns, but it could take weeks until it becomes clear whether those reopenings will cause a spike in COVID-19 cases, experts said Wednesday.

The outbreak’s trajectory varies wildly across the country, with steep increases in cases in some places, decreases in others and infection rates that can shift dramatically from neighborhood to neighborhood.

“Part of the challenge is although we are focused on the top-line national numbers in terms of our attention, what we are seeing is 50 different curves and 50 different stories playing out,” said Thomas Tsai, assistant professor at the Harvard Global Health Institute. “And what we have seen about COVID-19 is that the story and the effect is often very local.”

A handful of states started easing their lockdowns about two weeks ago, ranging from shopping malls in Texas to beach hotels in South Carolina to gyms in Wyoming. Georgia was one of the first states where some businesses were allowed to open their doors again, starting April 24 with barber shops, hair salons, gyms, bowling alleys and tattoo parlors.

Fauci pushes back against Rand Paul’s suggestion that schools reopen

While agreeing that children on the whole do much better than adults with COVID-19, Fauci noted recent reports of severe disease among children and said that the way the virus affects them still not well understood.

But it may be five to six weeks from then before the effects are known, said Crystal Watson of Johns Hopkins Center for Health Security.

“As we saw early in the year, epidemics of COVID-19 start slow and take some time to build and become evident,” Watson said in an email.

The outbreak’s trajectory can vary greatly around the country, according to an Associated Press analysis of confirmed cases. For instance, steep increases in daily new cases are occurring in Hennepin County in Minnesota, and Fairfax County in Virginia, while in others, such as Bergen County, New Jersey, and Wayne County, Michigan, there's been a steady decline.

In Geneva, meanwhile, a top World Health Organization official warned that it’s possible the new coronavirus may be here to stay. 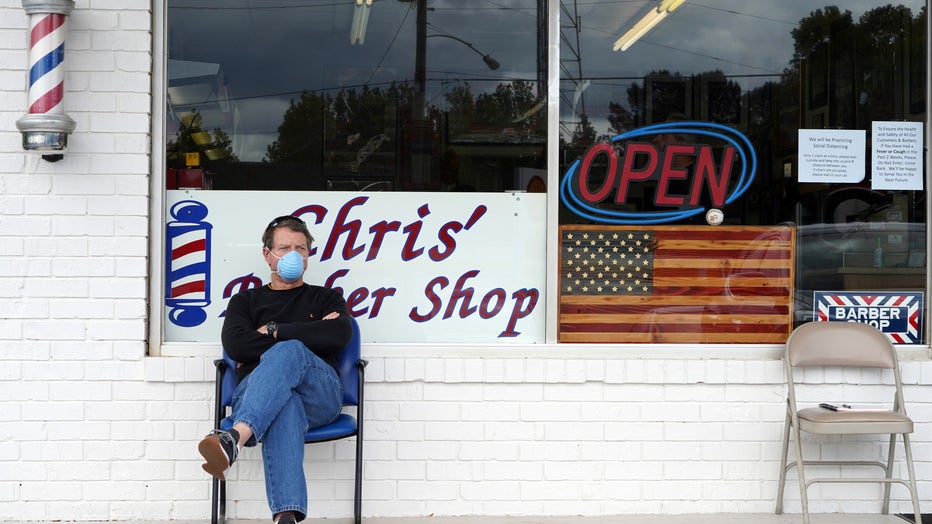 A Georgia resident sits outside a Barber Shop that has recently reopened. (Photo by TAMI CHAPPELL/AFP via Getty Images)

“This virus may never go away,” Dr. Michael Ryan said at a press briefing. Without a vaccine, he said it could take years for the global population to build up sufficient levels of immunity.

“I think it’s important to put this on the table,” he said. “This virus may become just another endemic virus in our communities,” like other previously novel diseases such as HIV, which have never disappeared, but for which effective treatments have been developed.

It can take three to five days for someone newly infected with the coronavirus to feel sick and some infected people won’t even have symptoms. Since testing is mostly reserved in the U.S. for those with symptoms, it can take two weeks or so — the time for one group of people to spread the virus to another — to have enough testing data to reflect a surge in cases.

“If you are doing adequate testing, it will take two to three weeks” to spot an increase, Dr. Ashish Jha, director of Harvard’s Global Health Institute, said Wednesday as he prepared to speak to a congressional subcommittee on the crisis.

He urged a dramatic increase in testing.

“It was the failure of testing that caused our country to shut down,” Jha said. “We need federal leadership on the level of testing, guidance on whom to test and federal help on the sheer capacity, the number of tests that can be done. We still do not have the testing capacity we need to open up safely.”

New coronavirus clusters have surfaced around the world as nations struggle to balance restarting their economies and preventing a second wave of infections.

Authorities in the Chinese city of Wuhan, where the pandemic first began late last year, reportedly are pressing ahead to test all 11 million residents for the virus within 10 days after a handful of new infections were found. In Lebanon, authorities reinstated a nationwide lockdown for four days beginning Wednesday night after a spike in reported infections and complaints that social distancing rules were being ignored.

In the U.S., as in many countries, the lockdowns have resulted in catastrophic levels of job losses. The U.S. unemployment rate soared to 14.7% in April, the highest rate since the Great Depression. There are roughly 30 million Americans out of work.

In Washington, U.S. Federal Reserve Chair Jerome Powell warned Wednesday that a prolonged recession could cause extensive damage to the economy, and urged Congress and the White House to act further to prevent long-lasting damage.

The Fed and Congress have already taken immense steps, but Powell warned that numerous bankruptcies among small businesses and extended unemployment for many people remain a serious risk.

While costly, more assistance in government spending or tax policies would be “worth it if it helps avoid long-term economic damage and leaves us with a stronger recovery,” he said.

Powell spoke a day after Democratic leaders proposed a $3 trillion aid package that would direct money to state and local governments, households, and health-care workers. That would come on top of roughly $3 trillion in earlier financial assistance. The Fed itself has cut interest rates to near zero and created numerous emergency lending programs.

But Trump administration officials have said they want to first see how previous aid packages affect the economy, and were skeptical about allowing more spending right now.

The tension in balancing people’s safety against severe economic fallout is playing out across the world. Italy partially lifted lockdown restrictions last week only to see a big jump in confirmed coronavirus cases in its hardest-hit region. Pakistan reported 2,000 new infections in a single day after crowds of people crammed into local markets as restrictions were eased.

In the United States, the country’s top infectious disease expert issued a blunt warning Tuesday that cities and states could see more COVID-19 deaths and economic damage if they lift stay-at-home orders too quickly.

“There is a real risk that you will trigger an outbreak that you may not be able to control,” Dr. Anthony Fauci said in Senate testimony.

The U.S. has the largest coronavirus outbreak in the world by far: 1.37 million infections and over 82,000 deaths, according to a tally by Johns Hopkins University. Worldwide, the virus has infected more than 4.2 million people and killed some 292,000, according to the Johns Hopkins tally. Experts say the actual numbers are likely far higher.