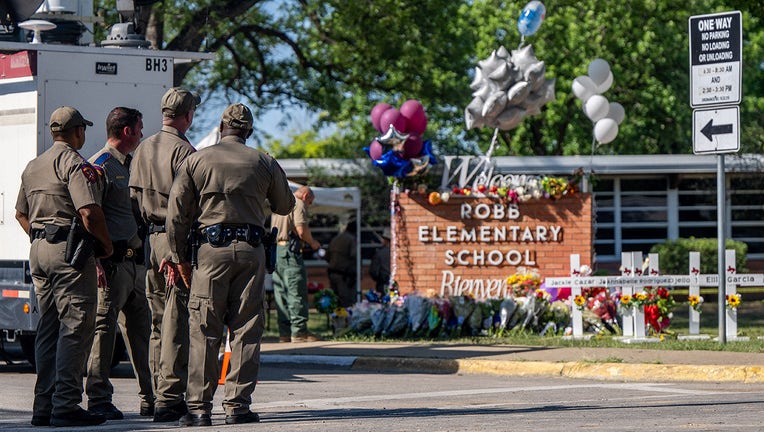 "Uvalde DA gets initial state police report on school shooting but doesn’t expect full investigation for months" was first published by The Texas Tribune, a nonprofit, nonpartisan media organization that informs Texans — and engages with them — about public policy, politics, government and statewide issues.

State police investigating the Uvalde school shooting have sent an initial report to prosecutors, according to a spokesperson for the Texas Department of Public Safety.

The Texas Rangers, a division of DPS, are conducting a criminal investigation into the shooting at Robb Elementary, where a gunman killed 19 children and two teachers in May. Hundreds of law enforcement officers who responded to the school, including those from DPS, did not confront the shooter for more than an hour after initial reports of shots fired.

The district attorney in Uvalde, Christina Mitchell, said the Rangers’ investigation remains open and that she did not anticipate a complete report for at least a few more months. Neither she nor DPS have publicly released the initial report yet. The investigation is expected to eventually include a review about whether any victims who died may have survived had police intervened sooner.

DPS Director Steve McCraw said last fall that the Rangers’ investigation would be completed by the end of December.

There was anger and frustration directed at the state's top police chief, with some families of the Uvalde school mass shooting calling for him to immediately resign.

"The initial report is what the Director was referring to and that was made available to the DA’s team last week," agency spokesperson Travis Considine wrote in an email this week.

In previous statements, Mitchell said that she needs a completed investigation to make any decisions about potential charges, including against any of the nearly 400 officers whose actions and inactions have been under scrutiny since the massacre, which was the deadliest school shooting in Texas history.

"I don’t expect to receive the complete investigation report until the spring, at the earliest," Mitchell said in an email last week. "It is not uncommon for an investigation of this magnitude to take over a year."

Mitchell did not answer follow-up emails about what reports she has received from state police and what additional information she expected in a completed report.

"I will not comment any further on the Robb Elementary investigation being conducted by the Texas Rangers," she wrote in an email. "Prosecutors do not comment on [on]going criminal investigations."

At least one part of the investigation has not yet been completed.

We are hearing for the first time some of the 911 calls placed from inside Robb Elementary in Uvalde during the mass shooting there.

A medical analysis of victims’ injuries — led by Dr. Mark Escott, medical director for the Texas Department of Public Safety and chief medical officer for the city of Austin — to "determine whether there may have been opportunities to save lives had emergency medical care been provided sooner" remained underway as of Tuesday, a city of Austin spokesperson said.

That review began in earnest around November. Autopsies of the victims, key for the examination, were completed a few weeks ago. The results of the autopsies have since been sealed, according to local news reports.

Considine, the DPS spokesperson, said the overall investigation is considered ongoing — and the report is initial rather than final — because "Rangers may receive assignments from special prosecutors for some time, which would lead to additional information."

He did not answer follow-up questions about whether any special prosecutors were overseeing the Uvalde investigation and, if so, whether they had given Rangers any assignments.

Numerous variables could affect the time it takes to complete a high-profile investigation as complex as the one regarding the Uvalde shooting, where hundreds first responders — many with body cameras — were at a scene that has mostly been defined by chaos and disorder, according to law enforcement experts.

"This is a massive level of officers that were involved in this, that were staged up and responded, and then you have all the families, you have all the 911 calls, the video footage. There’s an incredible amount of data that has to be gone through in this particular case," said Pat McLaughlin, a former crime scene specialist for the New York Police Department who retired in 2017. "Especially because it’s so sensitive on so many levels."

At least two state police officials have already been terminated for their actions in responding to the shooting.

There was emotional testimony on Capitol Hill Thursday as lawmakers try to find solutions in the wake of the Uvalde school shooting.

Juan Maldonado, a DPS sergeant who also responded to the shooting, was terminated in October. Maldonado opted to retire rather than appeal his firing.

McCraw, the agency’s leader, has said he would resign if his troopers had "any culpability" in the botched police response. He later said "DPS as an institution, right now, did not fail the community."

Considering some officers have already been disciplined, another police expert questioned whether it was a conflict of interest for state police to investigate the shooting in which 91 of the 376 responding officers were members of their own force.

The DPS spokesperson did not immediately respond Tuesday to questions about the issue.

"When you got an agency where your people were involved and may have violated state training and your departmental policy, which we know DPS did because they’ve already relieved some commander of duty, how can you now do a fair and impartial investigation?" said former Houston police chief Charles A. McClelland.

Zach Despart contributed to this story.

This article originally appeared in The Texas Tribune at https://www.texastribune.org/2023/01/10/uvalde-investigation-prosecutors/.