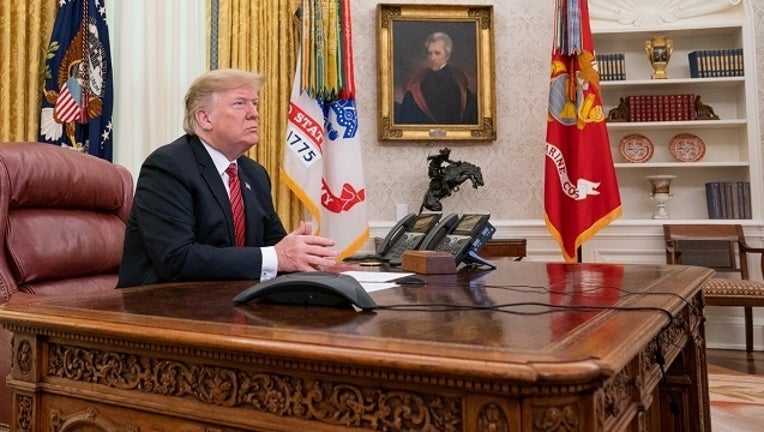 WASHINGTON (AP) - President Donald Trump is expected to declare near-total triumph over the Islamic State group in Syria in his State of the Union address, but U.S. defense officials are increasingly fearful that the militants are simply biding their time until the Americans leave the battlefield as planned.

IS militants have lost territory since Trump's surprise announcement in December that he was pulling U.S. forces out, but military officials warn the fighters could regroup within six months to a year after the Americans leave.

A Defense Department watchdog report released Monday warned of just such a possibility.

The Islamic State group "remains a potent force of battle-hardened and well-disciplined fighters that 'could likely resurge in Syria' absent continued counterterrorism pressure," the report from the inspector general said.

Trump's decision to leave Syria, which he initially said would be rapid but later slowed down, shocked U.S. allies led to the resignations of Defense Secretary Jim Mattis and the top envoy to the anti-IS coalition, Brett McGurk.

The withdrawal will fulfill Trump's goal of bringing troops home from Syria, but military leaders have pushed back for months, arguing that IS remains a threat and could regroup. U.S. policy has been to keep troops in place until the extremists are eradicated.

Fears that IS fighters are making strategic maneuvers ahead of a U.S. pullout could also fuel criticism that Trump is telegraphing his military plans - the same thing he accused President Barack Obama of doing in Afghanistan.

U.S. officials in recent weeks say IS has lost 99.5 percent of its territory and is holding on to fewer than 10 square kilometers of turf in Syria - an area smaller than New York's Central Park. In late November and December that figure had been estimated at between 400 and 600 square kilometers, according to officials briefed on the matter.

But several defense officials said Monday that many fighters fled to ungoverned spaces and other pockets in the north and in the west and are likely hiding out until they can regroup.

Trump said in a weekend interview that the caliphate is "almost knocked out."

U.S. officials say that IS fighters hold only several villages in the Middle Euphrates River Valley that amount to significantly less than 10 square kilometers. But, they say they don't expect that area to be cleared of militants for another several weeks, at best.

Officials say that overall, there are about 2,000 IS militants in Syria.

The Defense Department watchdog report warned that even with the IS forces on the run, the group "is still able to coordinate offensives and counter-offensives, as well as operate as a decentralized insurgency."

The report, which covers October through December 2018, also includes a classified section that was provided to Congress and includes a more detailed Pentagon assessment on the impact of the troops withdrawal and the status of IS militants and other foreign fighters in Syria.

According to the report, U.S. Central Command believes that IS fighters will continue to conduct "opportunistic attacks" on U.S. troops as they withdraw. And it says, "If Sunni socio-economic, political, and sectarian grievances are not adequately addressed by the national and local governments of Iraq and Syria it is very likely that ISIS will have the opportunity to set conditions for future resurgence and territorial control."

Central Command said that the Islamic State group is "regenerating key functions and capabilities more quickly in Iraq than in Syria," but unless there is sustained counterterrorism pressure, IS militants "could likely resurge in Syria within six to twelve months and regain limited territory" in the Middle Euphrates River Valley.

Despite Trump's order to withdraw, American officials maintain that the goal remains the "enduring defeat" of the Islamic State group and are moving ahead with a long-planned meeting of top diplomats from the 79-member U.S.-led anti-IS coalition this week. The aim of the conference is to recommit the coalition to that aim and ensure that the departure of U.S. troops does not overly complicate that mission.

Trump himself is expected to speak to the gathered foreign ministers at the State Department-hosted conference on Wednesday is widely expected to reiterate and expand on his anti-IS message from the State of the Union, officials said.