As Dallas works to implement new policies to hopefully improve relations between police and certain parts of the community, FOX 4 spoke with two of the people who will be tasked with making those changes.

DALLAS - As Dallas works to implement new policies to hopefully improve relations between police and certain parts of the community, FOX 4 spoke with two of the people who will be tasked with making those changes.

They talk about their experience in the uniform and what kind of change they'd like to see. Dallas police say they are listening and agree some changes need to be made.

In Dallas, protesters have marched for weeks calling for Dallas PD policy to be improved.

Erick Roman is a lieutenant, and Vincent Weddington is a major at Dallas Police Southwest Patrol. Some policy changes have already been made in recent weeks. 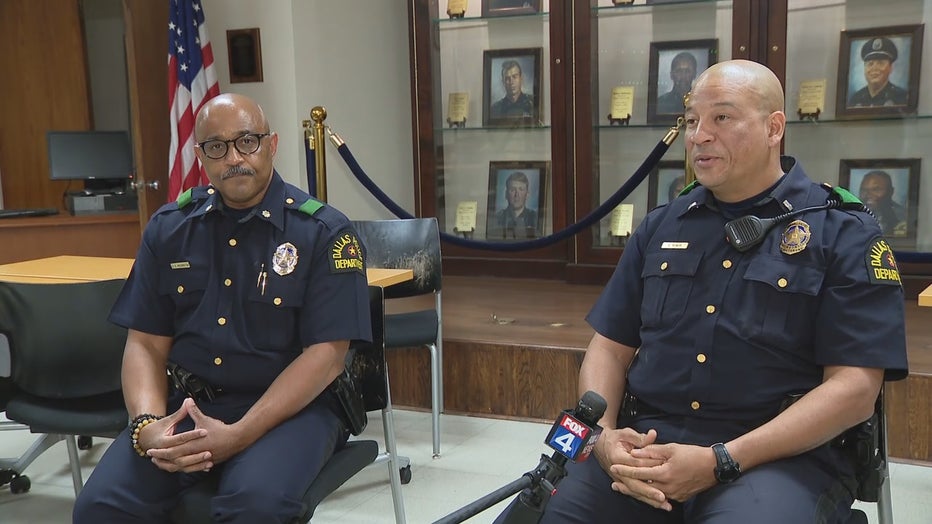 The Dallas Police Association president has said he agrees with the new DPD requirement to warn before shooting in premise but says he questions it in practicality.

Weddington and Roman think insufficient training is one of the root causes for recent problems.

“Currently in the state of Texas, it takes more hours to be a beautician than it does to be a police officer,” Weddington said.

“The investment in putting that person from the basic police academy and continuing to train the person on how to do billing searches, stress inoculations, on defensive tactics, those are the types of things where we get in trouble,” Roman said. “It’s the first time they experienced it and do know what to do and they are quick to go to their gun.”

“Do you think there’s a culture in police departments when it comes to how certain races are treated from some officers?” asked Reporter Steven Dial.

“We are not indifferent than any other industry point blank. If you say we don’t, that wouldn't be true,” Roman said.

“How does it change?” Dial asked.

There were some issues that aren’t under DPD control that some officers think needs to be looked at.

“We have what is called a civil service system. The chief can fire an officer. That termination will be upheld by the assistant city manager. It will be upheld by the city manager, and then the administrative law judge can come and give that problematic officer their job back,” Weddington said. “There are several officers who have been terminated and are on the streets patrolling right now.”

“You can’t put everything at our feet. You have lighting. You have trash,” Roman said. “There’s some things that happen in neighborhoods that need to be addressed that's not necessarily a Dallas police department thing. It’s quality of life.”

Dallas Police Chief Renee Hall said Sunday they will continue to listen to the community and make changes where needed.  She does not agree with defunding police, saying more than 80 percent of her budget is personnel.