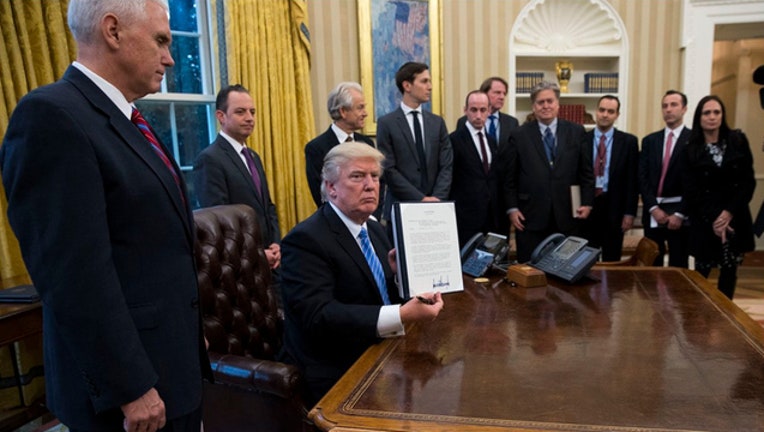 WASHINGTON (AP) - President Donald Trump will mark the end of his first 100 days in office with a flurry of executive orders, looking to fulfill campaign promises and rack up victories quickly by turning to a presidential tool he once derided.

But Trump's frequent use of the executive order points to his failure to move major legislation through a Congress controlled by his own party. Few of the orders themselves appear to deliver the sweeping changes the president has promised.

White House aides said that Trump will have signed 32 executive orders by Friday, the most of any president in their first 100 days since World War II. That's a far cry from Trump's heated campaign rhetoric, in which he railed against President Barack Obama's use of executive action late in his tenure when he faced a Republican Congress. Trump argued that he, the consummate deal maker, wouldn't need to rely on the tool.

But after taking office, Trump has learned to love the executive order.

In an email blast to reporters on Tuesday, the White House touted the sheer volume of orders as evidence that "Trump has accomplished more in his 100 days than any other President since Franklin Roosevelt." The White House has defended the use of executive orders as necessary to accomplish the speedy solutions it says the American people elected Trump to enact.

At first, the president's West Wing advisers fashioned an onslaught of executive action to set the tone for this term, with the centerpiece of that first-week blitz being Trump's travel ban. But that hastily drawn ban was rejected by the courts. A second replacement order also remains in judicial limbo.

Presidents frequently turn to executive orders when they struggle to advance their agendas through Congresses controlled by the opposition party. In Trump's case, he's struggled even though both houses of Congress are in the hands of Republicans; his health care bill never even came for a vote in the House after it drew sharp criticism from moderate and conservative Republicans alike.

And in the Senate, Republicans need to win over some Democratic lawmakers to get the 60 votes needed for passage of a contested bill.

"This president has found that legislating is hard work," said Mark Rozell, dean of George Mason University's Schar School of Policy and Government. "Executive orders are the easiest, simplest way to showcase action by the president to begin to fulfill some of the pledges made in the campaign."

A review of Trump's executive orders reveals that a number of them represent necessary first steps at unraveling Obama-era environmental safeguards and financial service regulations. In some cases, there is no other way around those administrative hoops and some of the orders have brought about major changes. Among them: his late March order that directed federal agencies to rescind any existing regulations that "unduly burden the development of domestic energy resources," a move that rolls back environmental protections that was denounced by Democrats and environmentalists and cheered by Republicans who advocate energy independence.

But many of Trump's executive orders signed with great fanfare have had little immediate impact.

One order, hailed as "historic" by White House aides, called for the completion within 90 days of a large-scale report to identify trade abuses. On Friday, Trump signed an order commissioning a review of the nation's tax regulations. He is has yet to fully launch his promised tax overhaul, which requires legislation.

On Tuesday, Trump is expected to sign an order that will create an inter-agency task force that that will be charged with identifying measures to spur American agricultural growth.

On Thursday, he's expected to sign an order to create whistleblower protections in the Office of Veteran Affairs while making it easier to discipline or terminate employees who fail to carry out their duties to help veterans. He's also poised to sign an order that directs a review of the locations available for off-shore oil and gas exploration. Another will instruct the Interior Department to review national monument designations made over the past two decades.

"Unlike his predecessor who abused executive authority to expand the size and scope of the federal government in an end run around Congress, President Trump is using his legal authority to restrain Washington bureaucrats," said White House spokeswoman Sarah Huckabee Sanders.

Obama signed 276 during his eight years in office, slightly less than Bush (291) and Bill Clinton (364) did in their two terms, according to data from the University of California-Santa Barbara. Executive orders were used relatively infrequently until Theodore Roosevelt ushered in a new era of executive action at the beginning of the 19th century, signing more than 1,000 while in office and establishing a template his successors.