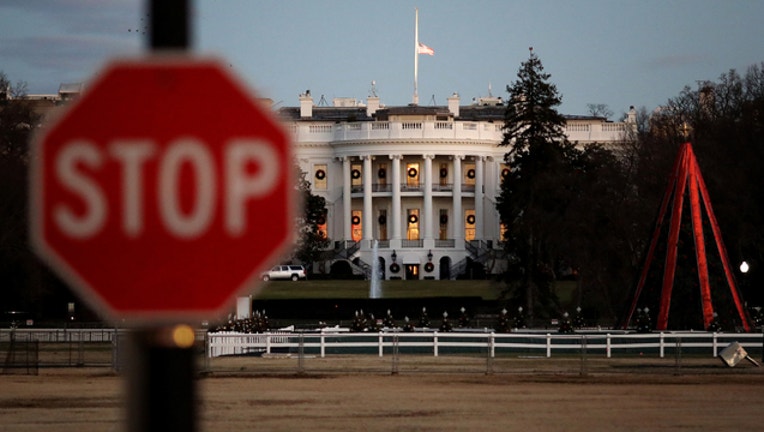 WASHINGTON (AP) - A shutdown affecting parts of the federal government appeared no closer to resolution Wednesday, with President Donald Trump and congressional Democrats locked in a hardening standoff over border wall money that threatens to carry over into January.

Trump vowed to hold the line, telling reporters during a visit to Iraq that he'll do "whatever it takes" to get money for border security. He declined to say how much he would accept in a deal to end the shutdown, stressing the need for border security.

The shutdown started Saturday when funding lapsed for nine Cabinet-level departments and dozens of agencies. Roughly 420,000 workers were deemed essential and are working unpaid, while an additional 380,000 have been furloughed.

While the White House was talking to congressional Democrats — and staff talks continued on Capitol Hill — negotiations dragged Wednesday, dimming hopes for a swift breakthrough.

With no deal at hand, members of the House were told there would be no votes on Thursday, assuring the shutdown would last yet another day. Lawmakers are away from Washington for the holidays and have been told they will have 24 hours' notice before having to return for a vote. The Senate is slated to come into session Thursday afternoon.

Rep. Mark Meadows of North Carolina, a Trump ally who has been involved in the talks, said the president "is very firm in his resolve that we need to secure our border." He told CNN, "I don't know that there's a lot of progress that has been made today."

But he added of Democrats: "If they believe that this president is going to yield on this particular issue, they're misreading him."

The impasse over government funding began last week, when the Senate approved a bipartisan deal keeping government open into February. That bill provided $1.3 billion for border security projects but not money for the wall. At Trump's urging, the House approved that package and inserted the $5.7 billion he had requested.

On Friday afternoon, a Senate procedural vote showed that Republicans lacked the 60 votes they'd need to force the measure with the wall funding through their chamber. That jump-started negotiations between Congress and the White House, but the deadline came and went without a deal.

"So President Trump, if you want to open the government, you must abandon the wall, plain and simple," Schumer said.

House Minority Leader Nancy Pelosi is in lockstep with Schumer against the wall funding. If the shutdown continues into 2019, she has vowed that her new Democratic majority will act quickly to pass legislation reopening the government.

The shutdown has been playing out against the backdrop of turmoil in the stock market, which is having a roller-coaster week.

Kevin Hassett, the chairman of the White House's Council of Economic Advisers, said the shutdown does not change the administration's expectation for strong growth heading into 2019. He told reporters a shutdown of a few weeks is not going to have any "significant effect on the outlook."

The shutdown that began on Saturday — the third of 2018 — caused a lapse in funding for nine of 15 Cabinet-level departments and dozens of agencies, including the departments of Homeland Security, Transportation, Interior, Agriculture, State and Justice.

Roughly 420,000 workers were deemed essential and were working unpaid, while another 380,000 were furloughed, meaning they'll stay home without pay. The shutdown complicates things for essential employees who planned trips for the holidays: According to the Office of Personnel Management rules, employees deemed essential or otherwise exempted from their respective agency furloughs can't take any vacation or sick days.

Furloughed federal workers have been given back pay in previous shutdowns.

Those being furloughed include 52,000 workers at the Internal Revenue Service and nearly everyone at NASA. About 8 in 10 employees of the National Park Service are staying home, and many parks have closed.

Roughly 44,000 U.S. Coast Guard employees are considered essential, and will report to work this week without pay, with another 6,000 furloughed. The Coast Guard is the only arm of the military affected by the shutdown because it is funded through the Department of Homeland Security.

The shutdown didn't stop people from visiting the White Sands National Monument in southern New Mexico, where hundreds of unauthorized visitors have in recent days climbed over a fence to enter the monument, according to The Alamogordo Daily News. State highway workers were sent to the area Monday to erect "no parking" signs along U.S. 70 outside the monument.

Trump claimed on Monday that federal workers are behind him in the shutdown fight, saying many "have said to me and communicated, 'stay out until you get the funding for the wall.'" He didn't say who he had heard from. Many rank-and-file workers have gone to social media with stories of the financial hardship they expect to face because of the shutdown.

One union representing federal workers slammed Trump's claim. Paul Shearon, the president of the International Federation of Professional and Technical Engineers, in a statement said the union has not heard from a single member who supports Trump's position.

"Most view this as an act of ineptitude," he said.