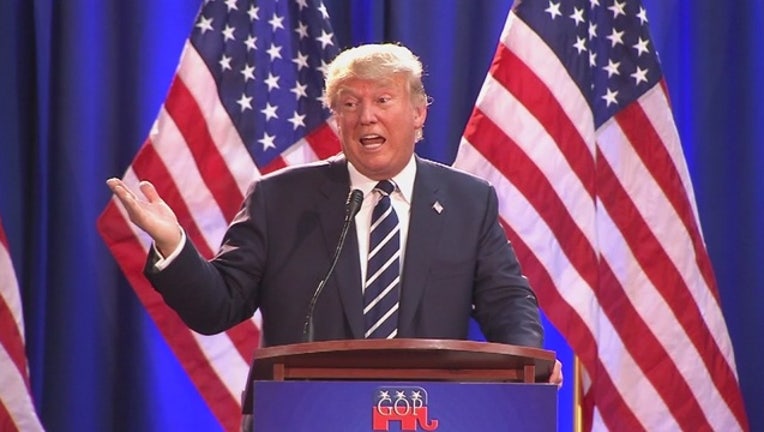 He dismisses the need for public policy ideas, gets confused about world affairs and sometimes says things that flat-out aren't true.

And the cheers from his supporters only grow louder.

By the standard that voters typically use to judge presidential candidates, Trump probably should not have survived his first day in the 2016 race.

Yet as the summer draws to a close and the initial votes in the nominating calendar appear on the horizon, Trump has established himself as the Republican front-runner.

"It's totally refreshing. He's not politically correct. He has a backbone and he cannot be bought," said Leigh Ann Crouse, 55, of Dubuque, Iowa.

Crouse is among the dozens of voters interviewed in the past two weeks by The Associated Press to understand how Trump has defied the laws of political gravity.

Uniting them is a deep-rooted anger and frustration with the nation's political leaders — President Barack Obama and conservative Republicans who, these voters say, haven't sufficiently stood up to the Democratic administration.

Some of those interviewed have not voted in years, or ever, and may not next year. But at this moment, they are entranced by Trump's combination of self-assurance, record of business success and a promise that his bank account is big enough to remain insulated from the forces they believe have poisoned Washington.

By the way, they say it's not that they are willing to look past Trump's flaws to fix what they believe ills the country. It's that those flaws are exactly what make him the leader America needs.

"At least we know where he stands," said Kurt Esche, 49, an independent who was at Trump's recent rally near Boston. "These other guys, I don't trust anything that comes out of their mouths. They're lying to get elected. This guy's at least saying what he believes."

"He may have started as a joke," Esche said, "but he may be the real deal."

Republican pollster Frank Luntz, who recently held a discussion with a group of nearly 30 Trump backers in Virginia, said such support is emblematic of Trump's popularity. It stems less from their love for the candidate and more from a belief those in power have failed.

"He activates the anger and frustration they have toward Washington and Wall Street," Luntz said.

For many, Trump's rise is a reaction to Obama, long criticized by opponents as a weak leader who appeases America's enemies rather than asserting U.S. dominance on the global stage.

"We're just so weak. We're not respected anymore," said Jerry Welshoff, 56, of Franklin, Massachusetts, who arrived at the recent Trump event near Boston unsure about the candidate. He walked away convinced he's the best choice for the White House.

The frustration among voters isn't limited to their feelings about Obama.

Welshoff said the Republican Party has done nothing but acquiesce to Obama despite taking control of Congress in 2014.

It's the same complaint heard from Duane Ernster, 57, of Dubuque. He is disappointed by the few accomplishments of tea party candidates elected to Congress in 2010.

"Things just didn't happen. It just hasn't happened the way we'd hoped," he said. "Maybe we need a warrior instead of a politician. People compare Mr. Trump to (Russian President Vladimir) Putin. There's something to be said about the man, who takes care of the Russian people."

Trump's uncanny ability to stumble without consequence has befuddled his rivals.

"He just keeps repeating things over and over again. And you all just accept it for the truth, and it's not," former Florida Gov. Jeb Bush told reporters in New Hampshire on Thursday.

During his recent discussion with Trump supporters, Luntz played several video clips of the billionaire's least flattering moments. The participants emerged from the session even more confident in their support for him.

It's for that reason that Herman Cain, the former chief executive of Godfather's Pizza who shot to the top of the polls in the fall of 2011, only to see his fortunes derailed by allegations of sexual harassment, said he believes that Trump can succeed.

"It is a totally new paradigm for how the race for president is unfolding," Cain said.