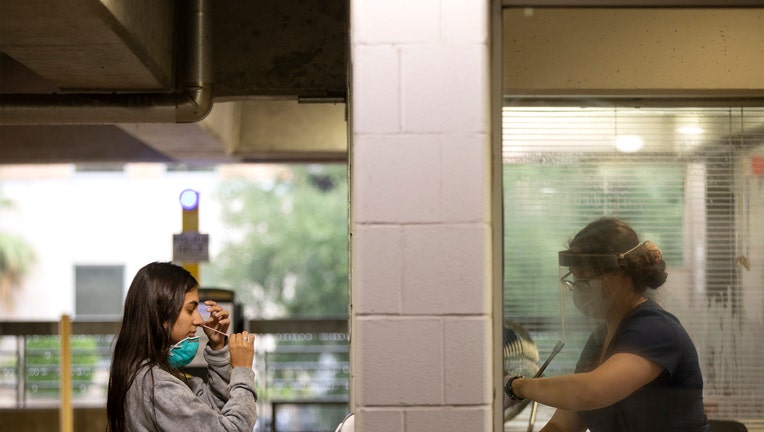 New COVID-19 cases and hospitalizations are on the rise, but experts say Texas is better prepared to handle another surge. (Miguel Gutierrez Jr./The Texas Tribune)

Cases of COVID-19 in parts of Texas surged to near catastrophic levels this summer as some hospitals were forced to put beds in hallways, intensive care units exceeded capacity and health officials struggled to stem the tide of the virus.

After peaking in late July and August, cases fell and leveled off in September, and the state’s seven-day positivity rate — or the proportion of positive tests — reached its lowest point since early June.

But health officials are now eyeing a worrying trend: New infections are rising again, and the number of patients hospitalized with COVID-19 is also ticking upward. The state reported 2,273 new cases Monday, and the seven-day average was up by 862 from the previous week. On Monday, at least 4,319 patients were hospitalized with COVID-19, far below the more than 10,000 in July, but that number has steadily risen during the last month.

“I’m no longer pondering if we’re going to see a surge,” said Dr. James McDeavitt, dean of clinical affairs at the Baylor College of Medicine. “We’re already seeing it.”

Eight months since Texas recorded its first case, experts say the state is more prepared to handle another wave, but they fear that if the state fails to control the outbreak, it could quickly spiral out of control.

“The question is whether it’ll be a modest surge, or something like we saw in July, or worse,” McDeavitt said.

The majority of new cases recently have been in people in their 20s and 30s who are generally healthier and less likely to face serious health complications, McDeavitt said. That’s a shift from the spring and summer surges, when older people and those with preexisting health conditions were hit hardest.

“I suspect this surge will not be as medically intensive as the past,” McDeavitt added.

Dr. David Persse, the city of Houston’s chief medical officer, said that cases in a younger demographic would not stay concentrated within that population.

“It’s true that the biggest increase in cases is in younger people,” he said. “It’s true that they tend to become less sick. The thing to keep in mind, however, is that those same people are at risk for spreading it to the 50-, 60-, 70-, 80-year-olds.”

At Houston Methodist, one of the region’s largest health care systems, medical staff were stretched thin this summer, said President Marc Boom. At its peak in July, the system’s staff treated nearly 850 patients with COVID-19 each day. Since then, Boom said, the medical community’s understanding of the virus has evolved, along with how to treat the disease.

Texas is on the cusp of another COVID-19 surge. Is the state better prepared to handle it?

Texas health officials are now eyeing a worrying trend: New infections are rising again, and the number of patients hospitalized with COVID-19 is also ticking upward.

Remdesivir, an antiviral medication, has shown promising results in minimizing the severity of illness, especially when administered shortly after symptoms develop. Houston Medical was the first hospital to use convalescent plasma, a therapy in which antibody-rich blood from people who have recovered from COVID-19 is administered to ill patients, Boom said.

“We’ve had tons of experience gained, better outcomes, shorter lengths of stay,” Boom said. “But this is still a serious illness.”

While health authorities are better equipped to deal with new spikes, including an adequate supply of protective gear and sizable quantities of drugs like Remdesivir, a fall surge could still be equally as taxing on hospitals, said Carrie Kroll, vice president of advocacy, quality and public health at the Texas Hospital Association. As colder weather forces people inside and families gather for the holiday season, the chances for transmission increase, she said.

“We certainly have been tested, and we know the beast that it is, and have shown that we were able to make it through those first two spikes,” Kroll said. “But we don’t want to test the limit by putting patients into hospitals.”

Hospitalizations from COVID-19 have already begun to tick upward in areas of the state including West Texas, the Dallas-Fort Worth area and the Panhandle. But nowhere is the situation as dire as in El Paso.

El Paso Health Director Angela Mora said that while she is “concerned with hospital capacity,” she’s confident the city can handle the influx of cases. Officials are instead focusing on reminding residents to follow simple precautions, such as wearing masks in public, washing hands frequently and avoiding gatherings.

“Somebody mentioned that the pandemic is out of control,” Mora said. “We are the ones who are out of control, because we are not practicing preventive measures that really work.”

The coronavirus is raging back in Texas and other parts of the country. COVID-19 fatigue is definitely a factor. Dr. Tim Bray, the director of the Institute for Urban Policy Research at UT Dallas, joins Good Day to talk about the data. More: urbanpolicyresearch.org/covid19/county-data-dashboard

“We know what works, our community knows what works, we’ve seen the results when everyone sticks to it,” said Dr. Philip Huang, who leads the Dallas County Health Department.

In response to rising hospitalizations in Amarillo and Lubbock, Abbott sent additional medical resources, including personnel, ventilators and IV pumps, last week. This came even as the governor allowed bars to reopen in parts of the state where patients with COVID-19 make up less than 15% of hospitalizations and local officials opted in.

Local officials in most major cities have so far been reluctant to lift restrictions, fearing packed bars and restaurants could lead to a dangerous rise in cases.

“This is a super slick virus that’s broken all the rules,” said Dr. Umair Shah, executive director of the Harris County Health Department. “We may be tired of this virus, but the virus is not tired of us.”

Disclosure: Texas Hospital Association has been a financial supporter of The Texas Tribune, a nonprofit, nonpartisan news organization that is funded in part by donations from members, foundations and corporate sponsors. Financial supporters play no role in the Tribune's journalism. Find a complete list of them here.

"Texas is on the cusp of another COVID-19 surge. Is the state better prepared to handle it?" was first published at https://www.texastribune.org/2020/10/20/texas-coronavirus-surge/ by The Texas Tribune. The Texas Tribune is proud to celebrate 10 years of exceptional journalism for an exceptional state.