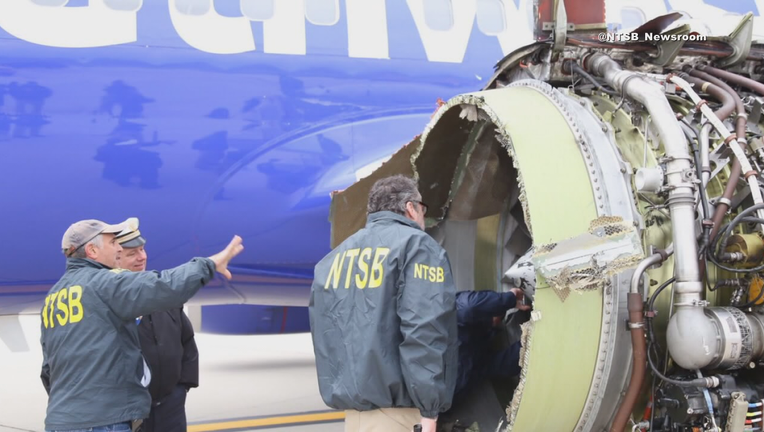 Federal safety officials say Boeing should redesign part of the casing on some engines to prevent the kind of accident that occurred when engine debris blew out a window on a Southwest Airlines plane and killed a passenger.

The National Transportation Safety Board determined Tuesday that the April 2018 accident was caused by a cracked fan blade that broke off in flight, hitting the engine case at a critical location. Parts of the engine turned into shrapnel, striking the fuselage.

After a harrowing emergency descent from 32,000 feet (9,750 meters), with one passenger blown partly out of the plane, the pilots of Southwest flight 1380 were able to land the crippled Boeing 737 in Philadelphia.

"That translates to a better chance that damage to the aircraft will be minimized during a (broken fan blade) event, improving the safety of the flying public," Sumwalt said.

The events of flight 1380 led to more frequent and intensive inspections of fan blades on certain engines made by CFM International, a joint venture between General Electric Co. and France's Safran SA. Those checks at Southwest and other airlines turned up about 15 other fan blades with slowly spreading cracks from fatigue or wear during normal use. 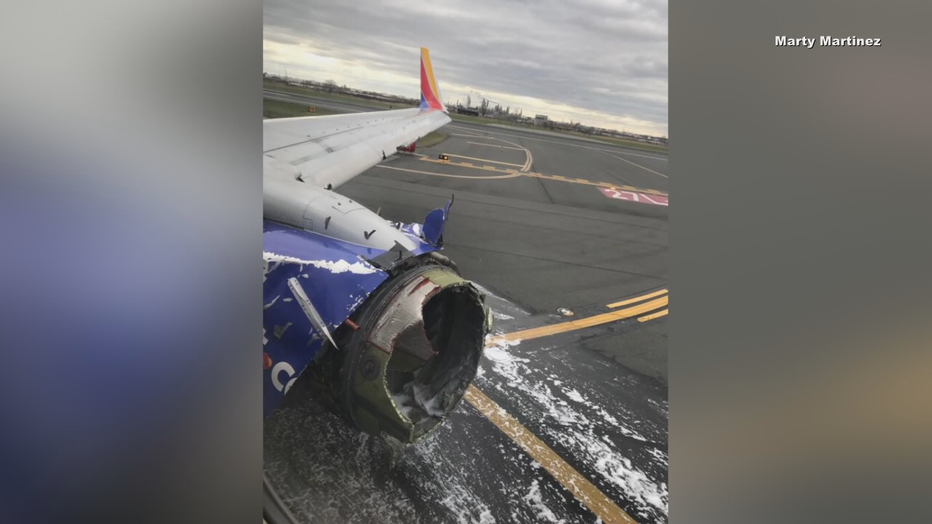 A Southwest 737 suffered a similar engine break-up in 2016, but pilots landed safely in Pensacola, Florida. NTSB investigator Pierre Scarfo said the board found no evidence to believe that the fan blade problem was unique to maintenance or operations at Southwest, which has the world's largest 737 fleet. However, earlier this year the Transportation Department's inspector general cited the Philadelphia incident among the reasons that it was reviewing government oversight of the airline.

On Tuesday, the NTSB recommended that the Federal Aviation Administration require Boeing to determine the most vulnerable locations on the engine fan case on certain planes if a fan blade breaks loose, and to redesign the cowling for better structural integrity. The board also recommended that airlines be required to retrofit many older Boeing 737s with the redesigned engine-housing part.

Southwest said it would review the recommendations.

The recommendations apply to "Next Generation" or NG versions of the 737, thousands of which have been built since the early 1990s. They do not cover the grounded Boeing 737 MAX, which uses different engines.

Boeing spokesman Peter Pedraza said all NG planes are safe because "the issue is completely mitigated by the fan blade inspections," but that Boeing is working on a "design enhancement" to address the safety board's recommendations.

FAA spokeswoman Marcia Alexander-Adams said the agency will review and respond to the NTSB recommendations. She noted that the agency has already required airlines to step up fan blade inspections.

CFM International said it would comply with any changes that might be made because of the NTSB recommendations.

The CFM56-7B engine was certified by the FAA in 1996 and is currently on 14,600 planes. The Southwest incidents in 2016 and 2018 are the only reported cases of a broken fan blade causing such damage to those engines, according to the NTSB.

The 24 blades in the left engine of flight 1380 were made in 2000 and used on more than 32,000 flights before the fateful flight left New York's LaGuardia Airport, bound for Dallas. 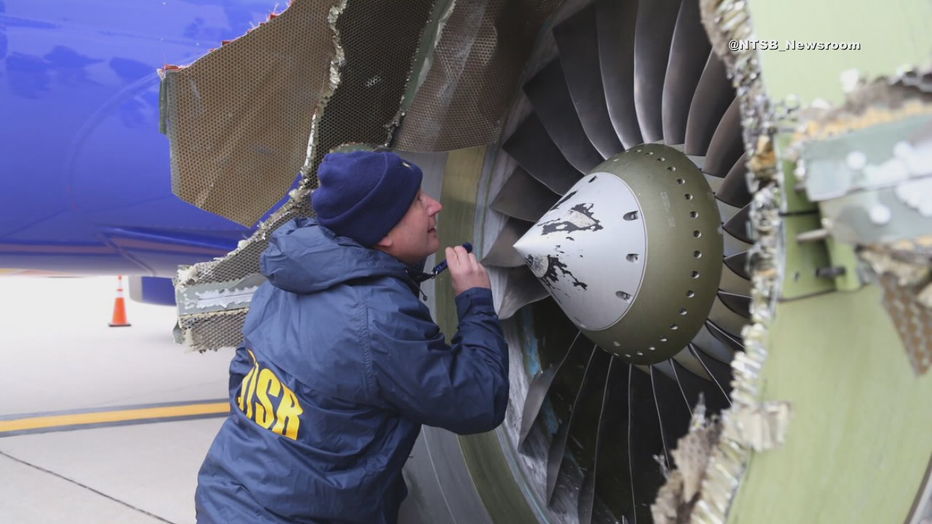 The NTSB concluded that fan blade No. 13 was already cracked at the time of its last overhaul, but the damage wasn't spotted using methods then in use, which relied heavily on visual inspections. The FAA later required inspections using electrical current and ultrasound.

As detailed during an investigative hearing into flight 1380 last November, when debris from the engine struck the plane, it caused a window to blow out and created an immediate decompression of the cabin -- oxygen masks dropped, debris swirled, the air temperature plunged, and the noise was deafening. The plane rolled sharply to the left. 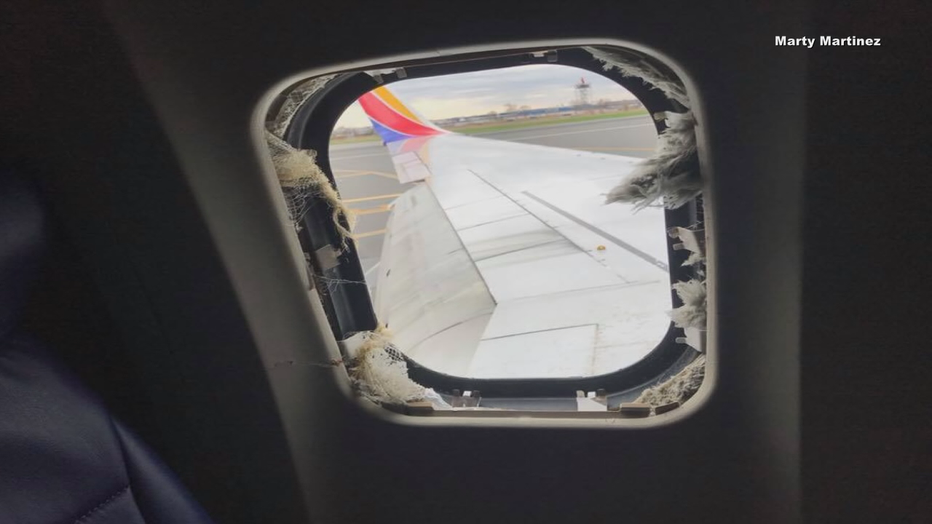 Jennifer Riordan, a 43-year-old banker and mother of two from Albuquerque, New Mexico, was blown halfway out of the plane. Two passengers helped bring her back inside, but she died from the injuries -- the first passenger killed on a U.S. airline flight in more than nine years. Eight others suffered minor injuries. There were 144 passengers and five crew members on the plane.

The captain, former Navy pilot Tammie Jo Shults, and the first officer, former Air Force pilot Darren Ellisor, donned oxygen masks and began an emergency descent. The safety board found that they didn't perform every checklist for an engine failure or fire, and they used unusual settings for the plane's flaps because they were worried about losing control if they flew too slowly.

"Basically, she used airmanship, she used judgment, because she felt that was the safest thing to do," Sumwalt said of Shults. He said the incident showed the value of well-trained and experienced pilots.

Flight attendants put on portable oxygen systems and moved around the cabin, helping passengers. They tried to aid Riordan. Safety board members praised their bravery, although adding that they should have returned to their jump seats for the landing.

A passenger took a selfie that showed three people who had put their oxygen masks on the wrong way despite diagrammed instructions and a pre-takeoff demonstration by flight attendants.

"It's very difficult, unfortunately, to get passengers to pay attention to the safety briefings," said NTSB staffer Jason Fedok. "We see that repeatedly."