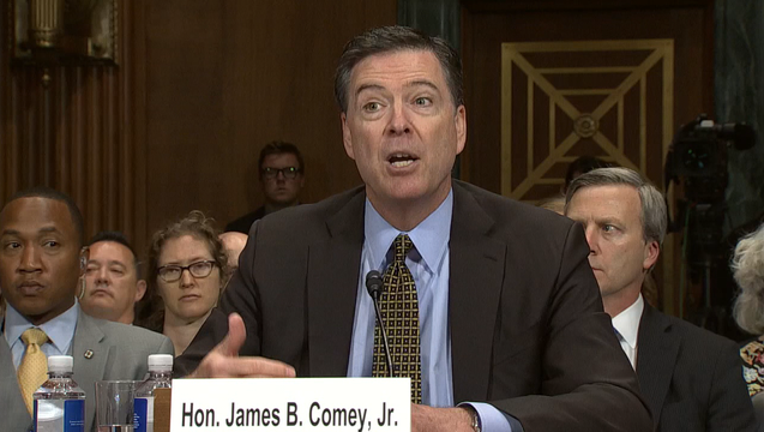 WASHINGTON (AP) - FBI Director James Comey told Congress Wednesday that revealing the reopening of the Hillary Clinton email probe just before Election Day came down to a painful, complicated choice between "really bad" and "catastrophic" options. He said he'd felt "slightly nauseous" to think he might have tipped the election outcome but in hindsight would change nothing.

"I would make the same decision," Comey declared during a lengthy hearing in which Democratic senators grilled him on the seeming inconsistency between the Clinton disclosure 11 days before the election and his silence about the bureau's investigation into possible contacts between Russia and Trump's campaign.

Comey, offering an impassioned public defense of how he handled the election-year issues, insisted that the FBI's actions in both investigations were consistent. He told the Senate Judiciary Committee that the FBI cannot take into account how it might benefit or harm politicians.

"I can't consider for a second whose political futures will be affected and in what way," Comey told the senators. "We have to ask ourselves what is the right thing to do and then do that thing."

Persistent questions from senators, and Comey's testimony, made clear that the FBI director's decisions of last summer and fall involving both the Trump and Clinton campaigns continue to roil national politics and produce lingering second-guessing about whether the investigations were handled evenly.

On Tuesday, Clinton partly attributed her loss to Comey's disclosure to Congress less than two weeks before Election Day that the email investigation would be revisited. Trump disagreed, tweeting that Comey actually "was the best thing that ever happened to Hillary Clinton in that he gave her a free pass for many bad deeds!"

Wednesday's hearing yielded Comey's most extensive explanation by far for the decision-making process, including his unusual July 2016 news conference in which he announced the FBI's decision not to recommend charges for Clinton and his notification to Congress months later.

Speaking at times with a raised voice, Comey said he faced two difficult decisions when agents told him in October that they had found emails potentially connected to the Clinton case on a laptop belonging to former Rep. Anthony Weiner, D-N.Y., who separated last year from top Clinton aide Huma Abedin. Weiner's laptop was seized as part of a sexting investigation involving a teenage girl.

Comey said he knew it would be unorthodox to alert Congress to that discovery 11 days before Americans picked a new president. But while that option was "really bad," he said he figured it'd be worse to hide the discovery from lawmakers, especially when he had testified under oath that the investigation had been concluded and had promised to advise lawmakers if it needed to be reopened.

Plus, he said, his agents weren't optimistic that they could finish reviewing the thousands of emails on the laptop before the election, and could not rule out that they would find evidence of "bad intent."

"Concealing in my view would be catastrophic, not just to the FBI, but well beyond," Comey said, in explaining his options. "And honestly, as between really bad and catastrophic, I said to my team we got to walk into the world of really bad. I've got to tell Congress that we're restarting this, not in some frivolous way, in a hugely significant way."

The FBI obtained a warrant to search the laptop and sifted through thousands of emails, Comey said, including ones with classified information that had been forwarded to the laptop by Abedin to be printed out. Though officials found many new emails, officials again found insufficient evidence that anyone had intended to break the law, Comey said.

He also said he had not intended to harm the Clinton campaign with his public announcement in July that Clinton and her aides had been "extremely careless" in their handling of classified information though there was not evidence to support criminal charges.

He said he had been concerned for months about how to publicly report the investigation's findings, and because of Justice Department actions including an impromptu airplane meeting between Bill Clinton and Attorney General Loretta Lynch he had concluded he needed to make the announcement himself.

"My goal was to say what is true. What did we do, what did we find, what do we think? And I tried to be as complete and fair" as possible, Comey said.

He also denied that he had treated disclosures about investigations into Clinton's emails differently than potential connections between the Trump campaign and Russia.

The FBI began that counterintelligence investigation in late July, but he did not disclose that until a hearing in March, after Trump had been elected and taken office. That prompted Democrats to complain of a double-standard in the way the investigations were treated. But Comey said that other than confirming the Clinton investigation existed, he did not discuss it until after it concluded last year. And he said the FBI does not expect to have anything to say about the Russia investigation until that one was over.

He declined Wednesday to discuss that investigation or to say which Americans the FBI was looking at.