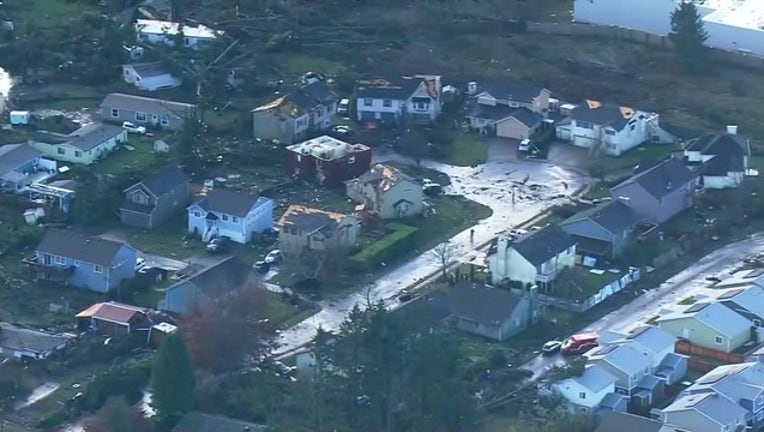 Based on radar imagery and video evidence, a tornado touched down south of Port Orchard shortly before 2 p.m., said Brent Bower, hydrologist with the National Weather Service in Seattle.

There were no immediate reports of injuries.

Emily Silverman told the television station KOMO-TV she was driving to a store with her husband at the time.

"It's raining and it's pouring down really bad and before you know it everything was flying everywhere," Silverman said. "Our car back windows blew out, our side windows blew out ... I thought I was a goner."

Her 2-year-old son was in the back seat.

"So glad he's OK because the whole back window just busted in," Silverman said. "It was just crazy. I've never seen anything like this in my life."

The Kitsap County Sheriff's Office called the damage "catastrophic," saying it was contained to neighborhoods east and south of a Walmart in Port Orchard. Power lines were down and roads were closed in the area, the sheriff's office said.

KOMO-TV reports damage was reported on Rhapsody Drive and at the Bethel Tavern.

Video from the television station's helicopter at the scene showed trees down, homes with roofs ripped off and debris scattered across yards.

Bower said they wouldn't be able to survey the area before it was dark and that they'd send a team Wednesday morning. They were working with emergency management partners to learn the extent of the damage.

The state averages 2.5 tornadoes a year, but December tornadoes are extremely rare, the weather service said on Twitter.

Most tornadoes in Washington are rated EF-0s with minor damage, Bower said.

Port Orchard is about 15 miles (24 kilometers) west of Seattle, across Puget Sound on the Kitsap Peninsula.