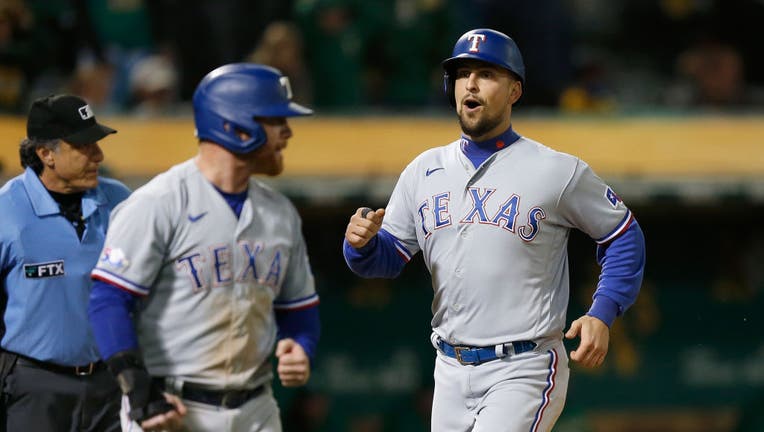 OAKLAND, CALIFORNIA - MAY 27: Nathaniel Lowe #30 of the Texas Rangers and Kole Calhoun #56 celebrate after scoring on a single by Andy Ibanez #77 in the top of the ninth inning against the Oakland Athletics at RingCentral Coliseum on May 27, 2022 in

OAKLAND, Calif. (AP) - Pinch-hitter Andy Ibañez drove in a pair of runs with a two-out single off Athletics closer Dany Jiménez, and the Texas Rangers scored three runs in the ninth inning for the second consecutive night to beat Oakland 8-5 on Friday.

The Rangers rallied with six runs in the final three innings and extended their winning streak to three. It came a day after they scored three runs in their final at-bat in a 4-1 victory.

"We’re starting to kind of put things together and we’re starting to feel more confidence, not only here in the clubhouse but out on the field," Ibañez said through an interpreter. "It’s a really good vibe."

Kole Calhoun drew a walk from Jiménez (1-2) to open the ninth and took third on Nathaniel Lowe’s one-out single. After Brad Miller stuck out looking and stood at home plate yelling at umpire Phil Cuzzi, Ibañez bounced a 1-2 pitch up into center field and then scored on Marcus Semien’s single.

"(We) were sitting in the dugout talking about how to stay positive, that things don’t always come out the way they’re supposed to, but to be positive," Ibañez said. "That helped me out a lot, gave me a lot of confidence."

Sean Murphy and Chad Pinder hit back-to-back home runs off Jon Gray for the A’s during a five-run third.

Trailing 5-2, the Rangers scored twice in the seventh then tied it in the eighth on Adolis García’s RBI double off Zach Jackson. García delivered the tie-breaking hit in Thursday’s 4-1 win.

Matt Moore (2-0) pitched two scoreless innings and had three strikeouts. Dennis Santana worked the ninth for his first save since the Dominican Rookie League in 2014.

"Instead of panicking, it was one at-bat after another," Rangers manager Chris Woodward said. "You hope to win every game 7-2 or 7-0, but when you find yourself tied in back-to-back games in the ninth inning, yesterday against a good pitcher and today against their closer, and you find a way to score three, that gives us a ton of confidence."

The Rangers have allowed five runs or fewer in 12 consecutive games, the longest active streak in the majors and longest by Texas since 2017.

Gray was tagged for a season-high five runs and five hits in six innings.

A’s starter Cole Irvin allowed two runs — one earned — in the first before settling in. The left-hander retired the side in order four times and had four strikeouts in 6 1/3 innings.

Athletics: Stephen Vogt (sprained right knee) will begin a rehab assignment with Triple-A Las Vegas on Saturday. The plan is for Vogt to play catcher while he’s in the game. "We’ll see how his body handles the workload," Kotsay said.

The Rangers’ Taylor Hearn and Oakland’s Zach Logue start in a matchup of left-handers on Saturday. Hearn (2-3, 5.77 ERA) has failed to make it out of the fifth inning in each of his previous two starts. Logue (2-3, 4.43) allowed four runs in 4 1/3 innings of his most recent start after giving up four run in his first 17 2/3 innings this season.