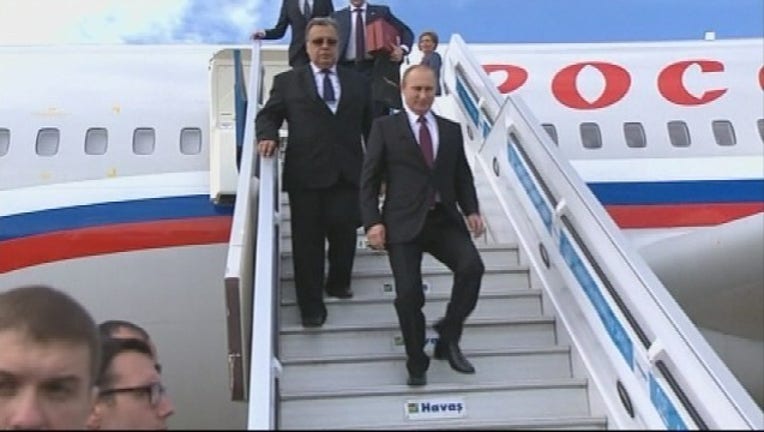 WASHINGTON (AP) - Russian President Vladimir Putin is dismissing as "a load of nonsense" the idea that Russia has damaging information on President Donald Trump and denies having any relationship with him.

"I never met with him. We have a lot of Americans who visit us," Putin said in an interview with NBC's "Sunday Night with Megyn Kelly." He added: "Do you think we're gathering compromising information on all of them right now or something? Are you all - have you all lost your senses over there?"

U.S. intelligence agencies have concluded that Russia meddled in the presidential election to hurt the bid of Democrat Hillary Clinton. Trump himself has been dogged by questions about any business dealings with Russia - he says he has none - as well as reports of a Russian dossier of damaging personal information.

"Well, this is just another load of nonsense," Putin said. "Where would we get this information from? Why, did we have some special relationship with him? We didn't have any relationship at all."

Putin again denied any Russian involvement in the U.S. presidential election and any knowledge of Russian contacts with the Trump campaign. A special counsel appointed by the Justice Department and congressional committees are investigating.

Former FBI Director James Comey, whom Trump fired after allegedly asking him to drop an investigation into former national security adviser Michael Flynn and his Russian contacts, is scheduled to testify Thursday before the Senate's intelligence committee.

In the NBC interview, Putin was asked about reports of Trump adviser and son-in-law Jared Kushner's attempt to set up a secret communications channel with Russia. Putin said he knew nothing about it and that he had not discussed with Ambassador Sergey Kislyak any meeting with Kushner.

Putin suggested that skilled hackers anywhere, including the U.S., could shift the blame for hacking onto Russia. He also alleged that the U.S. actively interferes with electoral campaigns of other countries.

"Put your finger anywhere on a map of the world, and everywhere you will hear complaints that American officials are interfering in internal electoral processes," he said.

"If this theory is correct and that can't be ruled out, then what could be easier, in this day and age, than using all the technical means at the disposal of the intelligence services, and using those means to organize some attacks and then pointing the finger at Russia," he said.

As the Senate prepared for Comey's appearance, Trump appeared unlikely to try to block him for testifying. The public hearing is expected to shed light on his private conversations with Trump in the weeks before his dismissal, including any discussion about the Flynn investigation.

There's been no final decision as to whether Trump would invoke executive privilege, and the matter remains under discussion, according to two administration officials who spoke on condition of anonymity to discuss private deliberations. Trump's known to change his mind on major issues.

On Sunday, Lawmakers from both parties urged Trump not to stand in the way of Comey's testimony.

"Clearly, it would be very, very troubling if the president of the United States is interfering in investigations that affect potentially the president and his closest associates," said Sen. Mark Warner, the top Democrat on the Senate intelligence committee.

Sen. Roy Blunt, a Republican member of the intelligence committee, said Comey's testimony would be critical to address mounting questions about possible obstruction of justice.

The Senate intelligence committee also has invited top spy and law enforcement officials to testify Wednesday at a hearing about the federal law governing foreign intelligence collection. Warner said he intended to use that time to ask Director of National Intelligence Dan Coats and National Security Agency Director Adm. Mike Rogers about reports that Trump had urged them to say publicly there was no collusion between the Russians and the Trump campaign. Acting FBI Director Andrew McCabe and deputy Attorney General Rod Rosenstein also are expected to testify.

For Thursday's hearing, Trump could invoke executive privilege by arguing that discussions with Comey pertained to national security and that he had an expectation of privacy in getting candid advice from top aides. But legal experts say Trump likely undermined those arguments because he publicly discussed the conversations in tweets and interviews. Trump's argument in favor of privilege also may be overcome because the investigation is focused on corruption and possible obstruction of justice.

Warner spoke on CNN's "State of the Union" and CBS' "Face the Nation." Blunt appeared on "Fox News Sunday."