Protests continue in Fort Worth for third night in a row

Protests continued in Fort Worth Tuesday over the death of George Floyd in Minnesota.

FORT WORTH, Texas - Protests continued in Fort Worth Tuesday over the death of George Floyd in Minnesota.

A crowd of protesters gathered at the courthouse Tuesday before marching downtown toward city hall around 5 p.m. before returning to the courthouse.

The group was reminded the curfew in Fort Worth remains in place. It means they’ll be asked to wrap up and go home at 8 p.m. 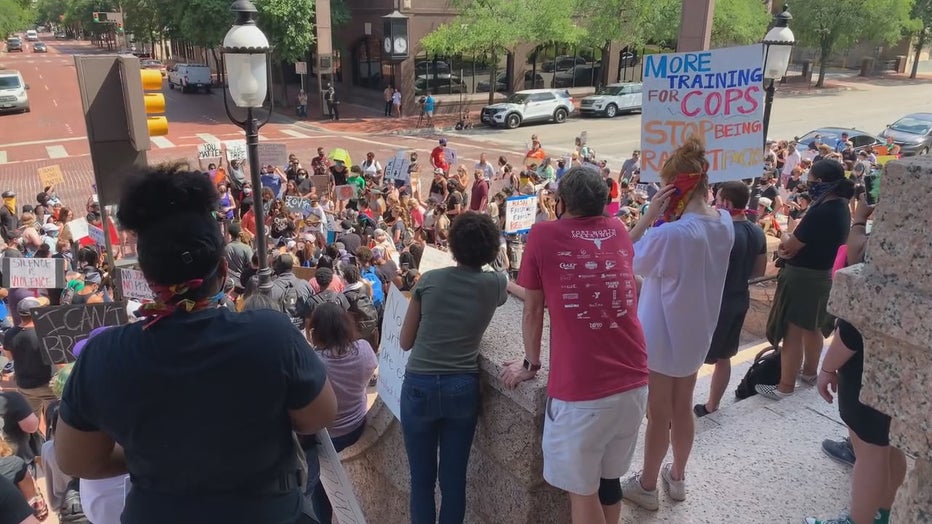 Amid discussion about widespread protesting, images from the demonstration in Fort Worth Monday night continue to resonate Fort Worth Police Chief Ed Kraus and other officers showing compassion with those marching.

RELATED: Gov. Abbott meets with leaders in Dallas and Fort Worth to discuss civil unrest

“It was incredibly moving last night with our chief kneeling and praying alongside the protesters. Him moving the SWAT team back on the promise that they would leave,” Price said. “Oftentimes, it’s that little bit of communication that helps unwind this.”

Chief Kraus is following closely the developments with Tuesdays’ march and protest and is hopeful for a peaceful demonstration. If there is reason for police to take action, they’ve indicated they will begin with verbal warnings. If that doesn’t work, then citations are the next level. Then, there would be arrests.