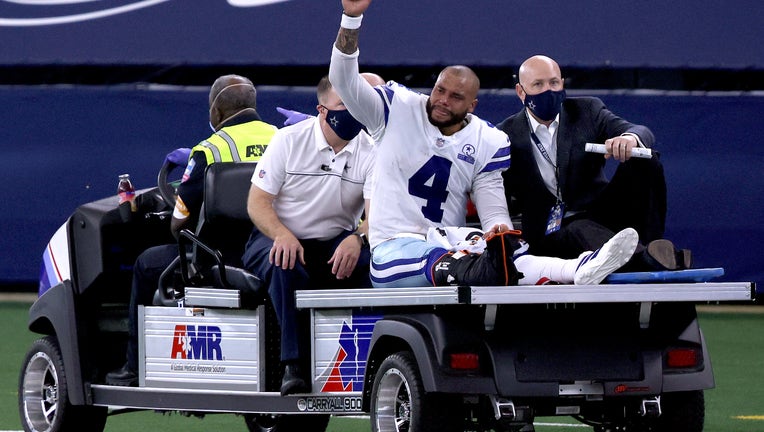 Dak Prescott #4 of the Dallas Cowboys is carted off the field after sustaining a leg injury against the New York Giants during the third quarter at AT&T Stadium on October 11, 2020 in Arlington, Texas. (Photo by Tom Pennington/Getty Images)

ARLINGTON, Texas - Dak Prescott sustained a gruesome ankle injury not long after his first career touchdown catch before backup Andy Dalton led a drive to a field goal on the final play, and the Dallas Cowboys beat the winless New York Giants 37-34 on Sunday.

Michael Gallup made two spectacular sideline catches on throws from Dalton, the second a 38-yarder to the New York 16. The Cowboys ran the clock down to 3 seconds, and Greg Zuerlein had his second game-ending kick of the season, from 34 yards.

Prescott was going down in the arms of defensive back Logan Ryan at the end of a 9-yard run in the third quarter when the Dallas quarterback's lower right leg got caught under Ryan and appeared to snap.

Prescott reached for the leg as he writhed in pain, and TV images showed his right foot bent at an awkward angle away from his leg.

The team said Prescott had a fracture dislocation of the right ankle and was taken to a hospital, where surgery was planned later in the day.

Dalton was Cincinnati's starter for nine seasons before the Bengals drafted Joe Burrow No. 1 overall last spring and Dalton signed a one-year deal to be Prescott's backup.

After Dallas got even and forced a New York punt, Gallup made a toe-dragging 19-yard catch. Then Gallup made an over-the-shoulder grab with Dion Lewis running stride for stride. Both catches held up on review.

The Cowboys (2-3), who trailed by two touchdowns in the second quarter for their fourth straight game with a double-digit deficit, extended their lead when Ezekiel Elliott ran in from 12 yards out to make it 31-23 three plays after Prescott's injury. Elliott had 91 yards rushing and two touchdowns.

It was the first game at the home of the Cowboys for former coach Jason Garrett, the Giants' offensive coordinator who was replaced by Mike McCarthy in Dallas after the Cowboys missed the playoffs amid high expectations last season.

Four years ago, Garrett chose to keep Prescott, then a rookie leading a franchise-best 11-game winning streak, as the starter over Tony Romo when Romo was healthy again. Prescott, who replaced an injured Romo in the preseason, has started every game of his career.

Garrett's offense stopped a two-game streak without a touchdown by getting in the end zone on New York's first possession on a 3-yard reverse to receiver Evan Engram.

The Giants led 17-3 in the second quarter — the fourth straight game with a double-digit deficit for the Cowboys — before the Cowboys went in front 24-20 with 16 seconds left in the first half on Prescott's 11-yard catch on a pass from receiver Cedrick Wilson, who took a reverse pitch from Elliott.

The Cowboys had another slight increase in the pandemic-reduced crowd at 25,147. Dallas has had fans at all three home games. There were 21,708 at the home opener and 25,021 last week. AT&T Stadium has 80,000 permanent seats.

Cowboys: DT Trysten Hill was carted off with a right knee on New York's first drive of the second half.

Cowboys: Arizona at home in their only scheduled Monday night appearance, Oct. 19.