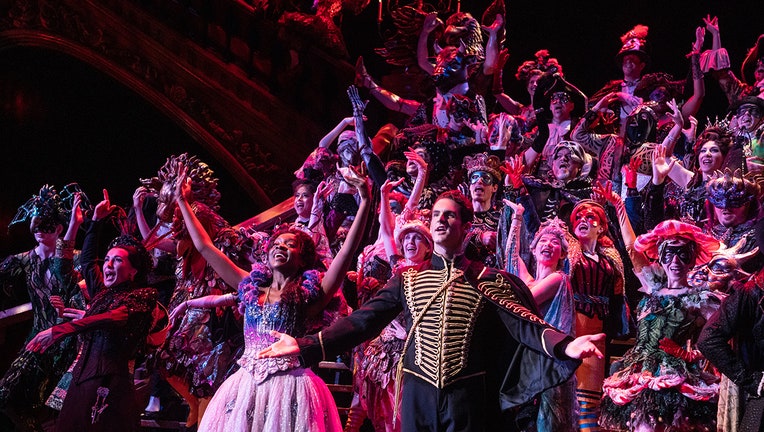 The cast of "The Phantom of the Opera" on Broadway. (Photo by Matthew Murphy)

NEW YORK - "The Phantom of the Opera," Broadway’s longest-running show, will close in early 2023 after more than 35 years, the production confirmed to FOX 5 NY.

The Andrew Lloyd Webber musical, based on a novel by Gaston Leroux and directed by Harold Prince, has been a constant fixture on Broadway since 1988. Its final performance at The Majestic Theatre is set for Saturday, Feb. 18, 2023, just weeks after what will be its 35th anniversary.

With its elaborate sets and costumes as well as a large cast and orchestra, "Phantom" is a costly production to sustain. Box office grosses have fluctuated since the show reopened after the pandemic — going as high as over $1 million a week but also dropping significantly. The producers may have seen the writing on the wall when the show's draw was $867,997 last week.

"Phantom" tells the story of a deformed composer who haunts the Paris Opera House and falls madly in love with an innocent young soprano, Christine. Its lavish songs include "Masquerade," "Angel of Music," "All I Ask of You" and "The Music of the Night."

The flagship London production, which debuted in 1986, will keep going "with no end in sight," according to a spokesperson for the show. Other international productions are also expected to move forward. Since the mid-1980s, more than 145 million people in 183 cities have seen the show performed in 17 languages.

The Broadway production has played more than 13,500 performances to 19 million people at The Majestic Theatre. Once the curtain comes down on "Phantom" for the last time, the title of Broadway's longest-running show will shift to "Chicago," which started in 1996.

Cameron Mackintosh, the show's producer, said that he, the theater owner The Shubert Organization, and Webber himself decided close the show after "considerable discussion."

"That this legendary show has thrilled New York for nearly 35 phenomenal years is quite astounding to me," Mackintosh said in a statement. "Our gratitude to American audiences falling in love with 'The Phantom' is infinite."

He praised everyone who has been involved with the show over the course of the three-plus decades.

"Gaston Leroux's opera ghost may be disappearing for now, but there is no doubt that Andrew Lloyd Webber's masterpiece will continue to enchant audiences in London and around the world — and one day will return to Broadway," Mackintosh said.

With The Associated Press.