Seniors left in the dark for days

Phyllis Gould and her fellow seniors live at Bennett House in Fairfax, Calif. a three-story building for low-income and disabled seniors run by Mercy Housing, where officials weren't immediately available for comment. The residents say there's no manager or worker who lives on site. They say they've asked management for a generator prior to this outage but haven't received one. PG&E also didn't immediately respond for an update to when power would be restored. Amber Lee reports

FAIRFAX, Calif. - Nearly 60 senior citizens - including 98-year-old Rosie Gould, an original Rosie the Riveter during World War II - say they have been left in the dark and without a working elevator or generator for at least four days because of the Pacific Gas & Electric power shutoff and neglectful management.

"It's dangerous for one thing," said Gould, who was one of the first female welders at the Kaiser shipyard in 1942 and a current docent at the Rosie the Rivert/World War II Home Front National Historical Park in Richmond. "Not all people have flashlights."

Although she has been through a lot in her life, she said the blackout that started last Saturday has been especially difficult.

"It's been hard mentally," Gould said. "I just broke down yesterday. I couldn't stop crying." 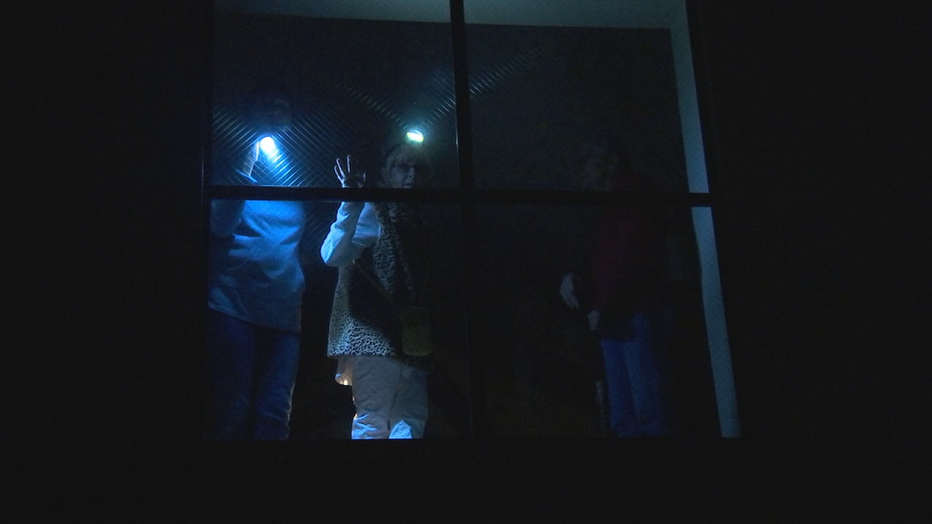 Seniors at the Bennett House in Fairfax have to use headlamps because of the PG&E power shutoff. Oct. 29, 2019

She and her fellow seniors live at the Bennett House in Fairfax, a three-story apartment building for low-income and disabled seniors run by Mercy Housing.

The residents say there's no manager or worker living on site. They say they've asked management for a generator before the outages began, but haven't received one. No one from Mercy called back on Tuesday night or Wednesday morning seeking comment.

PG&E spokeswoman Deanna Contreras on Wednesday morning said that Fairfax, along with Mill Valley and Woodacre, are areas still without power. In all, 10,000 customers in Marin County are in the dark, down from Saturday's peak of 118,000 customers.

"We are patrolling and inspecting lines, circuit by circuit," Contreras said. "We don't have an estimated time, but we hope it will be sooner rather than later."

PG&E has been shutting off power throughout Northern California to prevent their equipment from toppling in the high winds and sparking more wildfires. Marin County, where Gould lives, has been hit hard by the blackouts.

Gould reached out to KTVU on Tuesday afternoon in a near panic. She said she and her neighbors have been living without hot water, lights and the service of an elevator. She said residents who use wheelchairs have been unable to get downstairs or go outside. Many have gone without a cooked meal for days. They say they are angry and scared.

"I've been oxygen dependent," said Georgina Raynor, who lives on the third floor and has been confined to her bed.  "I have to rely on tanks being delivered with the power shutoff. Very frightening."

Down the darkened hallway, which had no emergency lighting set up, Charles Mason, 78, said he was down to two candles.

He said he received two texts in the last two days that power would be restored, and yet, he remained in the cold and dark.

"Nothing's happened," he said. "Who's responsible?" 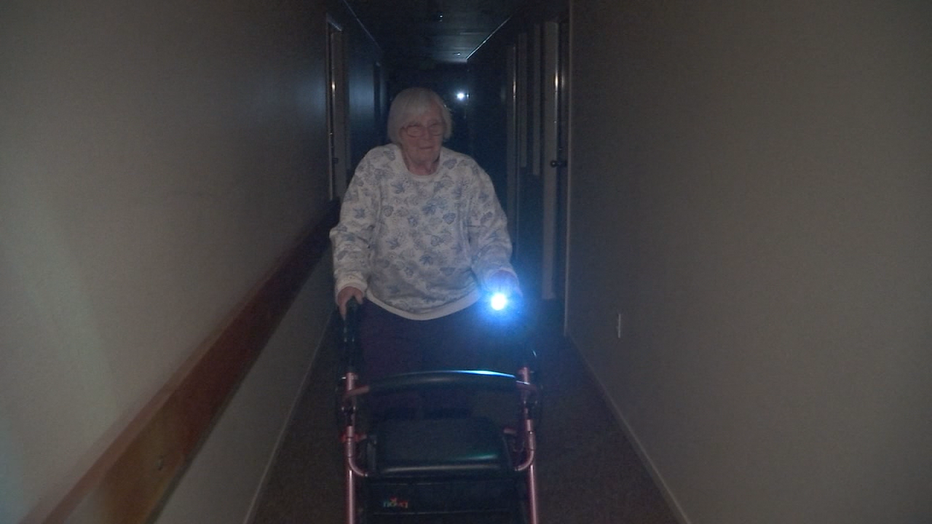 Phyllis Gould, 98, an original Rosie the Riveter, has been living in the dark in Fairfax, Calif. since Saturday. Oct. 29, 2019 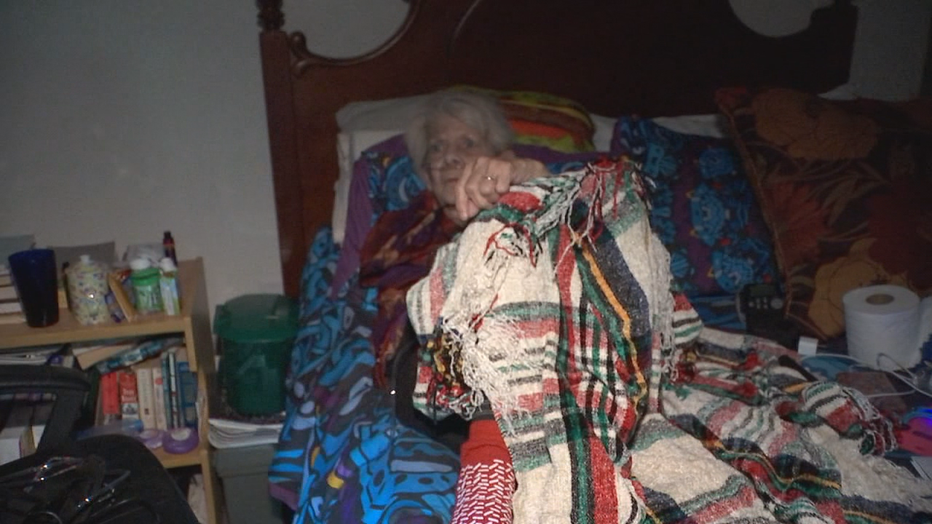 "I've been oxygen dependent. I have to rely on tanks being delivered with the power shutoff. It's, very frightening and scary," said Georgina Raynor who lives on the third floor. Oct. 29, 2019

Vicky Carruthers, 75, gave KTVU a tour of the building, using a headlamp to show the crew around in the dark.

"There are no safety or exit lights anywhere," she said. "Maybe the elevator could work so the people who are trapped upstairs who are disabled and very old can get downstairs if they need to get out. My big fear is a fire."

Those who live on the first floor are relying on a generator owned by Mark Shawn Keltner, 68, to power a television in the community room. His generators are also powering medical devices and cell phones.

"They're my neighbors," Keltner said. "They're my friends. Most of them, half of them, I don't even know because they live inside their apartments. They're in wheelchairs, totally helpless without electricity." 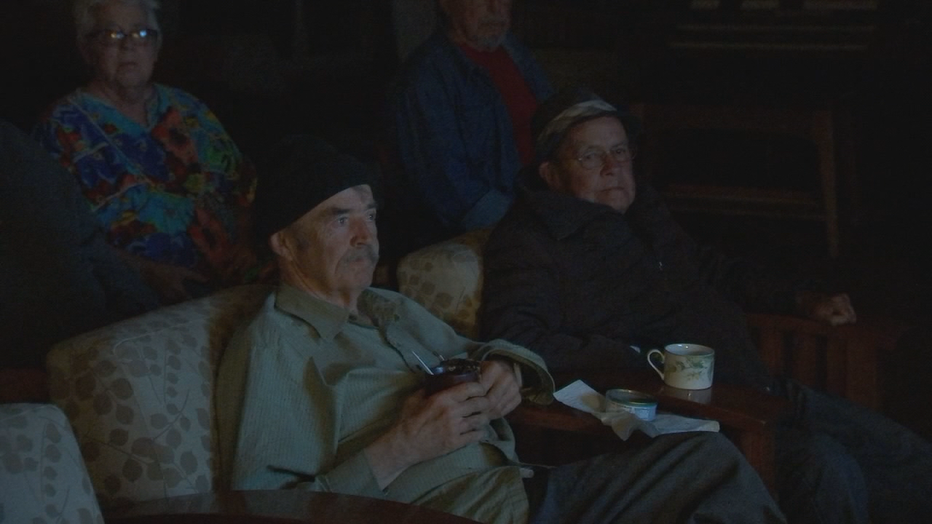 Residents of the Bennett House in Fairfax watch TV thanks to a friend's generator. They have been in the dark since Saturday. Oct. 29, 2019