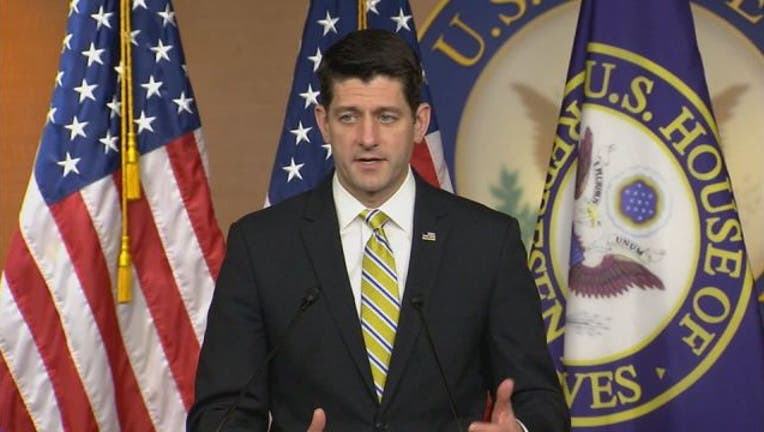 WASHINGTON (AP) - What's so stunning about former House Speaker Paul Ryan's new admissions regarding President Donald Trump is that his story is now so ordinary.

Ryan decided to leave Washington, as relayed in a new book, "American Carnage," by Tim Alberta, rather than endure two more years of the Trump presidency.

The disclosures portray the once rising GOP star as deeply conflicted in the age of Trump, saying one thing in public but thinking another in private, as he tried - and ultimately failed - to serve alongside the president.

"I'm telling you, he didn't know anything about government," Ryan says in the book. "I wanted to scold him all the time. What I learned as I went on, to scratch that itch, I had to do it in private. So, I did it in private all the time. And he actually ended up kind of appreciating it."

Ryan's story is remarkable, but not rare. Trump's critics in the GOP are increasingly unwilling, or unable, to speak their minds publicly about the president for fear of enduring his wrath, or that of his constituents.

The silence of Republicans takes on new significance as Trump seeks a second term, potentially deepening his hold on the party.

"Those of us around him really helped to stop him from making bad decisions. All the time," said Ryan, who stepped down after nearly two decades in Washington , in the book. "We helped him make much better decisions, which were contrary to kind of what his knee-jerk reaction was. Now I think he's making some of these knee-jerk reactions."

Trump shot back Friday, lashing out at the former speaker as a "baby" and a "terrible speaker."

Trump unleashed his criticism on one of Wisconsin's favorite sons just before leaving Washington to visit the state, which he wants to win again in 2020. He called the retired congressman's record "atrocious" despite Ryan's work in securing Trump's main domestic policy achievement, the GOP tax bill.

"Paul Ryan let us down. Paul Ryan was a terrible speaker," Trump told reporters on the South Lawn. "He didn't know what the hell he was doing."

This is the dilemma facing Republicans in the age of Trump. If they disagree with the president, they face consequences. If they stay close, they often must contort their political preferences to fit his unpredictable actions. If they decide to leave, as Ryan did, they lose part of their platform to influence and shape the White House.

One Republican congressman said Friday that on Capitol Hill and beyond, "everyone is in on the joke." They take the good with the bad with this president, and find their own way in Trump's party, said the congressman, who was granted anonymity to discuss the private thinking.

But the style and substance of Trump's mercurial presidency has so disrupted political norms and standard operations that some of the party's once ascending members are, like Ryan, taking leave.

"He's not alone," said Flake, who retired early rather than run for reelection alongside Trump.

"I could not stand on a campaign stage with the president when people shouted, 'Lock her up!' - and I'm not alone in that," the Arizonan said by phone Friday. "The problem isn't just Trump. It's Trumpism. Unfortunately, it's a virus that's infected not just the Republican party, but the Democratic Party, as well."

Trump's allies scoff at those who struggle to find their way in today's GOP, saying the White House has an open door and welcomes wide-ranging views.

"There's room for a difference of opinion, and to be passionate about it," said Rep. Mark Meadows, R-N.C., a Trump confidant. "But you don't have to be personal with your attacks. And I think that's the difference."

Meadows said voters back home are watching to see if what lawmakers say when they campaign beside Trump is backed up by their work in Congress. "Some members enjoy running as a pro-Trump Republican only to not support that title when they're here in Washington, D.C.," he said.

Rep. Patrick McHenry, R-N.C., who had been part of the House GOP's leadership team, said: "If you want to have an adversarial role, then this administration will treat you as an adversary. And if you want to be a friend of the administration and have constructive criticism, they will take it. They will listen."

Ryan is now well into his retirement, having handed over the speaker's gavel to Nancy Pelosi and decamped for his Wisconsin hometown of Janesville. The party's 2012 vice presidential nominee, alongside Mitt Romney, he was often considered a future presidential contender. When he announced his retirement in 2018, he said he doubted any political run was in his future. Now he hits the speaking circuit and serves on the board of Fox.

Ryan was an early skeptic of Trump's 2016 presidential bid, holding out as one of the last GOP leaders to back him. Ryan finally did endorse, only to backtrack after the disclosures that Trump bragged about sexually assaulting women . Ryan was booed at a rally back home after disinviting Trump.

At one point, Alberta writes, Ryan was among GOP leaders considering a Plan B to Trump's nomination as their party's 2016 presidential candidate.

Ultimately, Ryan came on board in the waning days of election, saying his was a binary choice between Trump and Hillary Clinton, who he said would be a continuation of Democratic power in Washington.

"Can we handle four years of this?" Ryan wrote.

It turns out, Ryan couldn't stomach more than two years of Trump. Rather than stick around, he left.