Trump has been suspended from the platforms since Jan. 7, the day after a mob of his supporters engaged in a deadly riot at the Capitol.

Facebook justified the suspension by saying they feared Trump would incite further violence while refusing to accept Joe Biden’s election victory. Two posts, in particular, stood out to the board in their decision to uphold the suspension.

During the riot, Trump posted a message to his followers at the Capitol that said "We love you. You’re very special" and called them "great patriots" and said they would "remember this day forever."

The oversight board found these posts "severely" violated Facebook’s and Instagram’s rules by praising or supporting people engaging in violence. Four people died during the riot and several more were injured. A fifth person, a Capitol officer, was found to have died from natural causes. 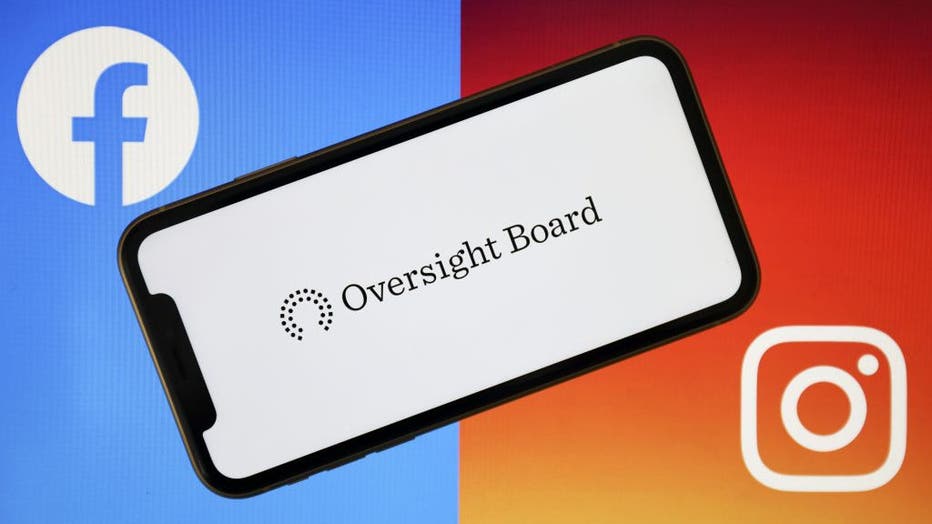 Oversight Board logo is seen on a smartphone with Facebook and Instagram logos in the background in Ankara, Turkey on May 07, 2020. (Photo by Hakan Nural/Anadolu Agency via Getty Images)

Even so, the board disagreed with a permanent ban.

"It is not permissible for Facebook to keep a user off the platform for an undefined period, with no criteria for when or whether the account will be restored," the board said. "In applying this penalty, Facebook did not follow a clear, published procedure. ‘Indefinite’ suspensions are not described in the company’s content policies. Facebook’s normal penalties include removing the violating content, imposing a time-bound period of suspension, or permanently disabling the page and account."

The board said Facebook must reassess this penalty within six months of the panel’s decision.

"This penalty must be based on the gravity of the violation and the prospect of future harm," the panel said. It must also be consistent with Facebook’s rules for severe violations, which must, in turn, be "clear, necessary and proportionate."

"In applying a vague, standardless penalty and then referring this case to the Board to resolve, Facebook seeks to avoid its responsibilities. The Board declines Facebook’s request and insists that Facebook apply and justify a defined penalty."

RELATED: Facebook's oversight board to rule on Trump's account ban on Wednesday

No matter the outcome, Facebook had committed to following the board’s decision. Comprised of 20 lawyers, professors, former politicians, human rights activists and experts in media policy and digital rights, Facebook said the board has the power to "impose binding decisions on a private social media company."

Even so, Facebook maintains discretion on whether to implement any policy recommendations, the Wall Street Journal reported.

Twitter made a similar move by deactivating Trump’s personal and presidential accounts. Initially, Twitter’s suspension was to last 12 hours. But two days after the Capitol riot, Twitter moved to make the ban permanent.

Following Trump’s ban, Conservatives criticized the social media industry, claiming Trump was being censored and his suspension was further proof of a bias against conservatives.

Many of Trump’s tweets and Facebook posts that contained inaccurate information about the COVID-19 pandemic or election results were marked as inaccurate or misleading in the months prior to his suspension.

Without access to his accounts, Trump has sought other means of keeping his thoughts available to the public. He’s maintained headlines by issuing news releases from "The Office of the Former President."

And just one day before the board upheld his suspension, Trump launched a new communications platform that allows him to post, and allows followers to share the former president’s posts to Twitter and Facebook.

The new platform is designed for one-way communication, so users cannot reply to the former president’s posts.

On Wednesday, Trump responded to the committee's decision to uphold his suspension.

"What Facebook, Twitter, and Google have done is a total disgrace and an embarrassment to our Country," Trump said on his new website. "Free Speech has been taken away from the President of the United States because the Radical Left Lunatics are afraid of the truth, but the truth will come out anyway, bigger and stronger than ever before."

"The People of our Country will not stand for it! These corrupt social media companies must pay a political price, and must never again be allowed to destroy and decimate our Electoral Process."

This story was reported from Atlanta. Kelly Hayes contributed.