AUSTIN, Texas - Gov. Greg Abbott on Thursday said he supports decriminalizing fentanyl testing strips, reversing his previous opposition to the idea as he tries to fight an increase in opioid overdoses in the state, which he has made a point of emphasis heading into January’s legislative session.

He made the statement after visiting with University of Houston researchers who have developed a fentanyl vaccine that targets the synthetic opioid and could block its ability to enter the brain, eliminating the drug’s euphoric effects. University officials said the drug could have a breakthrough effect by becoming a relapse prevention agent for people trying to quit opioid use, which is notoriously difficult.

Abbott said in the next legislative session he wants to change Texas law to classify deaths caused by fentanyl overdose as poisonings, which would allow for stiffer penalties — potentially including murder charges — for those who knowingly sell drugs laced with fentanyl to drug users. He also said he wanted to make the opioid-reversing drug naloxone — commonly known as Narcan — more readily available across the state.

"We also need to legalize fentanyl test strips in the state of Texas so that people will be able to test drugs at home to know whether or not it might be laced with fentanyl," Abbott said.

Harm reduction groups who work with drug users have called for the decriminalization of testing strips for years. Sometimes, drug users don’t know that the drugs they buy are laced with fentanyl and unknowingly ingest the synthetic opioid, leading to overdoses. By using fentanyl testing strips to determine whether the opioid is present in their drugs, users can avoid overdosing on the powerful opioid. Experts say that could keep them alive until the time in which they are ready to start moving off drugs. 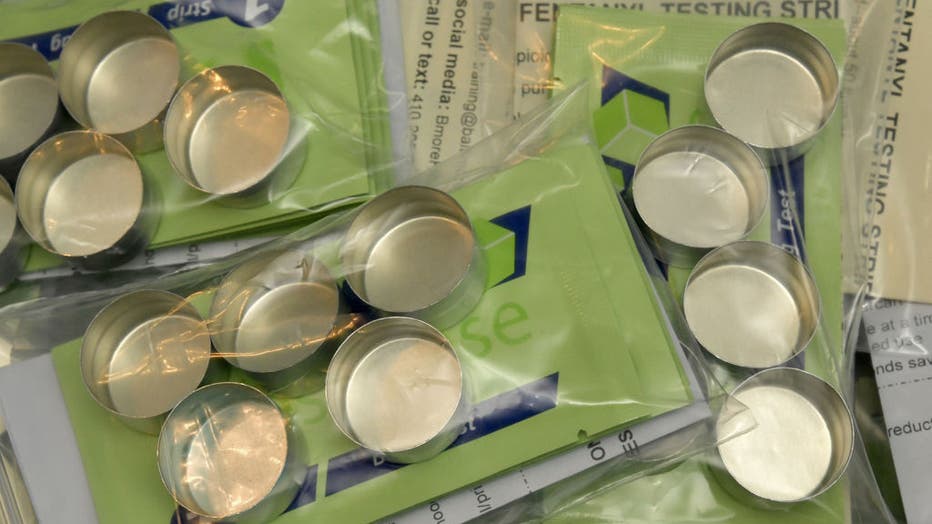 Fentanyl testing strips are one of the items given out by Baltimore Harm Reduction Coalition outreach workers as part of their public health mission to keep people who use drugs safer with clean supplies. (Amy Davis/Baltimore Sun/Tribune News Service

But tough-on-drugs lawmakers in Texas, including Abbott, have historically been opposed to decriminalizing the testing strips and other drug paraphernalia. Currently, possession of drug paraphernalia — items used to consume illegal substances that can include fentanyl testing strips, used syringes and pipes — is a Class C misdemeanor punishable by a fine of up to $500.

Abbott acknowledged that in the past, lawmakers have pushed back against decriminalizing fentanyl testing strips, "including ... myself."

"I was not in favor of it last session," he said.

But he said the increase in opioid overdoses from fentanyl in the state has increased so much that there’s a "better understanding" that the state needs to take more drastic action to save lives.

"There’s going to be a movement across the state to make sure we do everything that we can to protect people from dying from fentanyl, and I think test strips will be one of those ways," he said.