A 2-month-old baby boy is fighting for his life at a Dallas hospital. His parents are hoping to prevent other&nbsp;families from facing the same medical emergency.

DALLAS - A 2-month-old baby boy is fighting for his life at a Dallas hospital. His parents are hoping to prevent other families from facing the same medical emergency.

The parents from Durant, Oklahoma, say their baby boy developed a case of RSV. The respiratory virus can severely affect infants and young children. They say doctors encouraged them to return home with their sick baby, despite their gut feeling that he should stay in the hospital.

Destiny Dodson and Jakob Garland fought back tears when they recalled how Jakobi, their 2-month-old son, so quickly went from having a little cough to fighting for his life. He is now on life support.

"The ER was swamped that night,” Garland recalled. “They were busy. The floor was jam-packed. Everyone had masks on. Everyone was coughing. The whole vibe, we were already scared.”

They took Jakobi to the ER in Durant, fearing he may have RSV, or respiratory syncytial virus. Jakobi's  3-year old sister had been diagnosed with it a week earlier and was staying with her grandmother to prevent its spread. At the ER, they say they were sent home. 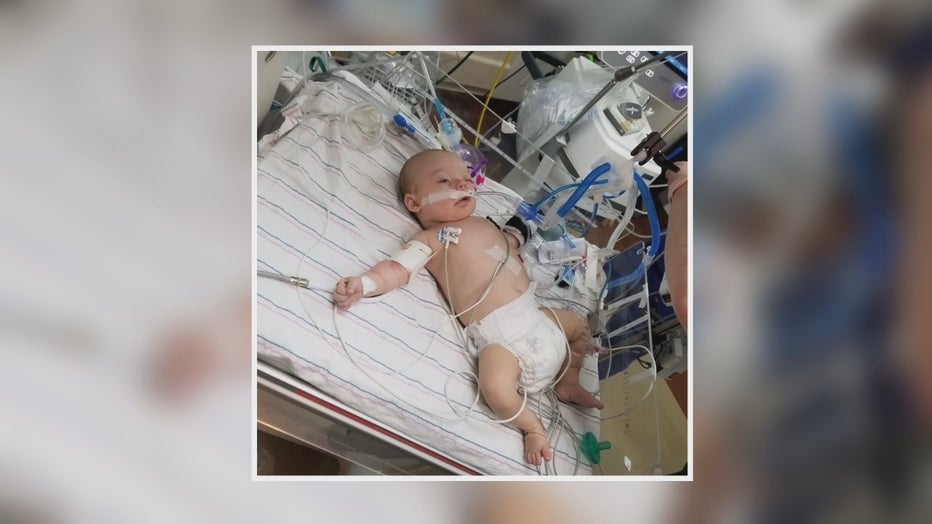 “When the nurse practitioner or pediatrician running the floor says, ‘I think you all are good enough parents. If you can afford it, buy this $300 piece of medical equipment to monitor his oxygen levels versus him staying in the ER or him getting admitted,’” Garland said.

The next day, they say Jakobi became lethargic.

"He didn't look pale, but he looked gray and he always has a really pretty complexion. So I took his temperature and that’s when I realized it was very severely low,” Dodson recalled. “I yanked him up. And at that point, he was nodding in and out. On the way to the emergency room, that's when he quit breathing."

RSV can be very dangerous in infants, causing pneumonia and the life-threatening conditions. Medical City Dallas says it began seeing an increase in RSV cases this past November and December.

Dodson and Garland believe a regimen of antibiotics and heavy sedation are helping baby Jakobi heal.  But they believe pushing harder based on their intuition would've prevented it.

Early symptoms of RSV in children can resemble a cold with a runny nose, a cough and a decrease in appetite. Babies born prematurely tend to be more at risk. There’s no vaccine to prevent RSV, but scientists are working on one.

The couple encourages clear communication with your pediatrician about testing.