North Texas Tollway Authority officials want to identify the driver of a semi who turned around and drove against traffic during rush hour.

DALLAS - North Texas Tollway Authority officials want to identify the driver of a semi who turned around and drove against traffic during rush hour.

A commuter's dash camera recorded what happened Tuesday at about 6:30 p.m.

The video shows the semi cut across traffic, and then use an “on-ramp” to exit the Dallas North Tollway.

Anybody who drives the tollway probably knows how narrow it is in parts, but there was apparently just enough space for an 18-wheeler to turn across traffic and go the wrong way.

“I got this dash camera, just to catch these strange, I guess, weird occurrences,” Philip Poon said.

With a daily commute between Plano and Dallas, Poon knew he'd probably catch a few interesting moments on his dash camera.

He had just bought it, and didn't foresee catching something so quick.

“I have never see anything like this,” he said.

His camera shows traffic coming to a halt Tuesday evening.

A semi turned around and drove the wrong way on an “on-ramp.” 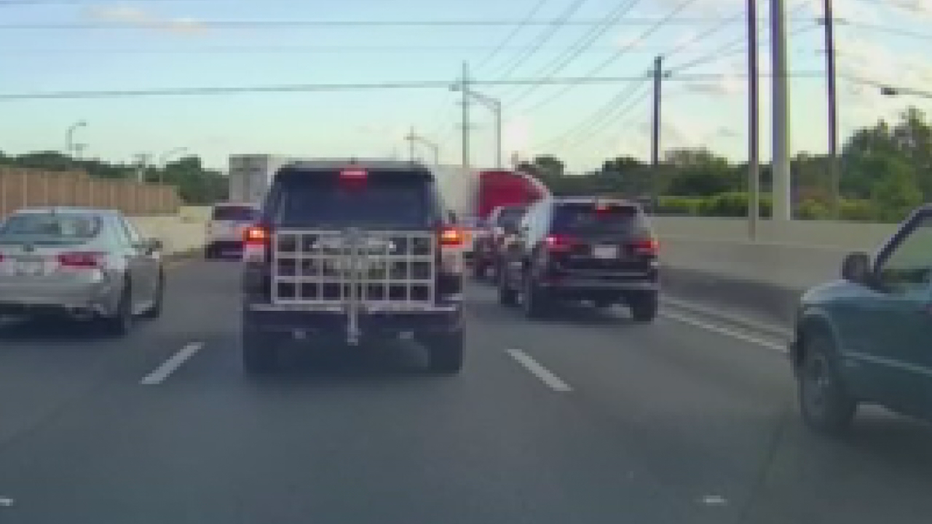 “I was like, ‘What the heck is he doing?’ Putting everybody’s lives in danger,” Poon added.

Poon said he did not see any incidents beyond the semi that would have prompted the truck to turn around.

He did see a pickup trying to use the “on-ramp” around the same time.

“I saw a black pickup truck squeezing by him on the left to get onto the tollway,” Poon added. “I think he made it. Hopefully he did.”

“It's very unsettling,” said Michael Reyna, spokesman for the NTTA. “I can't think of any situation that would make this a good move. This is very unsafe. I would caution anybody to not do this.”

After learning of the incident, NTTA officials began checking video.

The trailer has a logo for the company Xtra, which leases and rents out trailers.

Reyna said the NTTA reached out to the company as well, seeing if it could help track down the driver.

Even if there's no citation, there could be a lesson for the driver of that 18-wheeler.

“We don't think there's anything actionable, but I would love to talk to the driver.  What would I say to the driver? I'd say, ‘Please don't ever do that again. It is very unsafe.’”

FOX4 reached out to Xtra to see if they might know who the driver is, but did not get a response.