The Dallas police chief and the Dallas County sheriff were not involved in the president's roundtable discussion Thursday. However, they were present for a roundtable with police chiefs from several cities that was moderated by FOX 4's Terrence Friday.

DALLAS - The Dallas police chief and the Dallas County sheriff were not involved in the president's roundtable discussion Thursday.

However, they were present for a roundtable Thursday with police chiefs from several cities that was moderated by FOX 4's Terrence Friday.

The Dallas Police Department will implement a "warning before shooting" policy on Friday, meaning an officer must warn a suspect or detainee before firing.

Chief Renee Hall discussed some of the other police reforms currently in the works during the Facebook Live chat.

The roundtable discussion was put on by an organization called 100 Black Men of Greater Dallas/Fort Worth Inc. 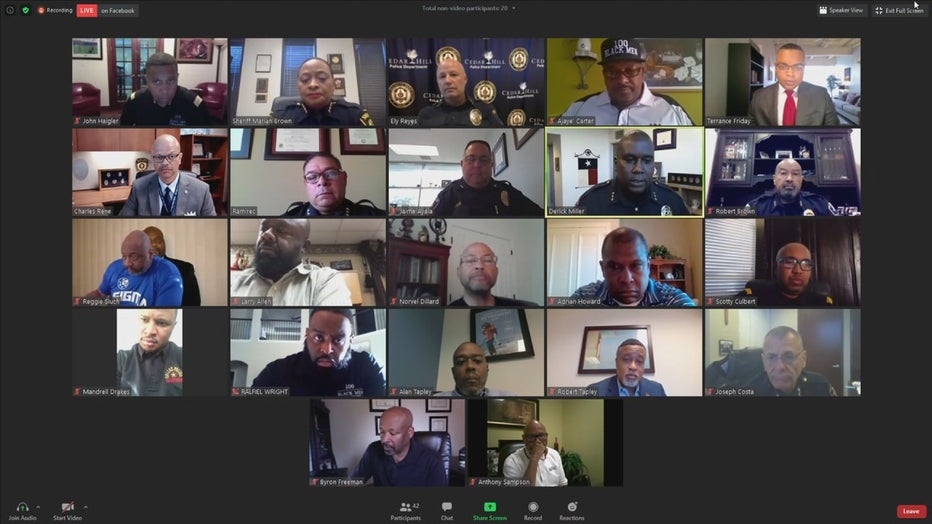 Friday asked a series of questions submitted in advance by members and others in the community.

Nearly all of the top brass on the call were either African American or Latino. They discussed a wide range of issues in law enforcement from "implicit bias" to best hiring practices.

Chief Hall talked about the need for what's called an "early warning" system, flagging an officer with a history of complaints. It's one of several reforms being implemented at the Dallas Police Department over the next few months.

“But if you have supervisors who are going to protect individuals, even in those early warning systems, there can be problems,” said Chief Hall. “And I think that you know from recruiting, ho2 we hire individuals, hold them accountable, all of those come into play when we're trying to stamp out a culture that existed in law enforcement for many, many years.”

Thursday’s discussion comes after days of protests from Dallas to Fort Worth to smaller cities like Arlington.

Dallas County Sheriff Marian Brown and the interim Arlington Police Chief Jaime Ayala spoke to FOX 4 before the roundtable about calls for reform in law enforcement. Both said they would have welcomed the opportunity to meet with president trump today had they been asked.

“It doesn't bother me. But I will say this: any effective discussion must include parties from all end of the table. I'll leave that there,” Brown said. “I think as leaders in law enforcement it's important for us to have a collective voice in saying that we think it's time for change. I think it's important for us not only to have that collective voice but to take what happened in a flash point and turning it into actual change in what we do in policing.”

“Across the country, we're seeing people demonstrate and voice their concerns. So I think it's important for us to be part of the dialogue because the community wants us to be engaged,” Ayala said. “They want us to affect change and we need to listen to them. And we need to look at these issues through a different lens.”

Ayala says he respects the right for people to peacefully protest. He wants to hear what residents in his community have to say about the work police do.

In closing, organizers of the discussion tasked the panelists to check back in 90 days. They want to hear what new policies and procedures are in place and how the community is responding to those changes.