North Texans with family in Beirut are organizing efforts to help. Our Lady of Lebanon Maronite Catholic Church in Lewisville is collecting funds to send to Catholic Charities to help.

LEWISVILLE, Texas - The cleanup continues as the people of Lebanon work on the recovery process after a massive explosion killed more than 100 people and displaced hundreds of thousands of people in the city of Beirut.

A Lebanese judge said 16 port staffers have been arrested over this week's deadly blast.

Officials said the blast appears to have been caused by an accidental fire, ignited by tons of ammonium nitrate that had apparently been at the Port of Beirut for six years.

North Texans with family in Beirut are organizing efforts to help.

Our Lady of Lebanon Maronite Catholic Church in Lewisville is collecting funds to send to Catholic Charities to help.

Several church members and the pastor have family in Beirut who have lost everything, including their homes.

Mikhael Icho’s family sent him video of their neighborhood in Beirut after the explosion.

They live just about a half mile from the blast site.

“I was hoping that they were alive,” Icho said. “That was the first reaction, was no contact, because everything was knocked down. So we were like frantically trying to get ahold of them.” 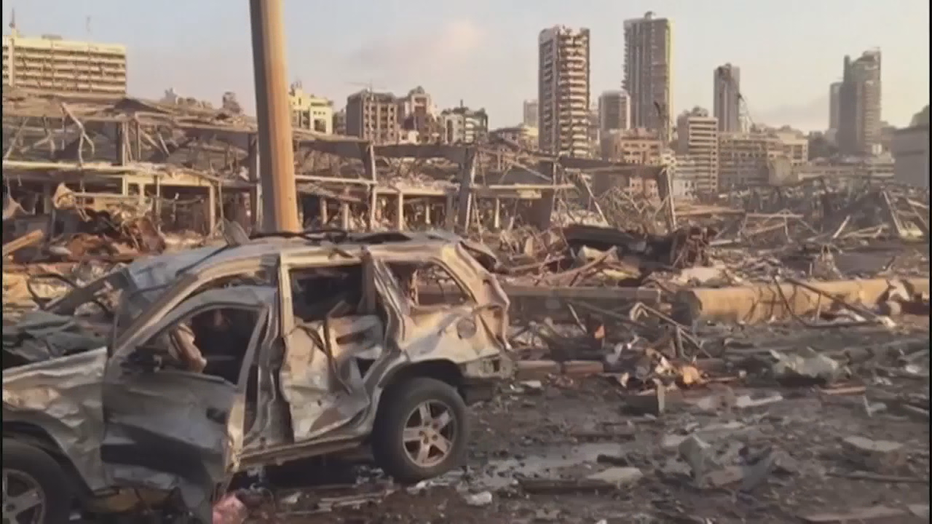 Icho’s cousin and aunt were home at the time of the blast, and remarkably have only minor injuries.

“They heard the boom, and then like seconds after that, it was just the flash,” Icho explained. “There was rocks everywhere, they got cut. She had stitches on her foot, on her forehead. They both got concussions. So it just pretty much just blew everything over in the house and walls have fallen, balconies have fallen.”

Their homes were destroyed, with the force of the blast knocking almost everything off the walls.

“There was a picture of a Jesus, that was left on the wall. It was only thing on the walls in the house and that's a sign,” Icho said.

The community at Our Lady of Lebanon Maronite Catholic Church in Lewisville have also been busy over the last 48 hours trying to reach family members.

“We pray. It was very emotional yesterday and today, but we pray,” Father Assaad ElBasha said. “[We] are trying to show our help and taking our request to God.”

The church’s pastor, Elbasha, was supposed to be in Lebanon this week for his niece’s wedding.

But due to COVID-19, the family decided to have a much smaller service and happened to be away at the time of the blast.

“This wedding saved my family because all of my family is living in the city of Beirut. This explosion happened when my family was in the church up in North Lebanon, and we were so thankful,” Elbasha said.

Though his brother’s and sister’s homes were both destroyed, the church is collecting funds to help everyone who’s been displaced by the tragedy.

“People, right now, they’re sleeping in the parking lot, their houses are not safe,” Elbasha explained. “A lot of people, they were coming from their job at this time and they get killed because of that. But what can we do? We’re still saying God be merciful to all the people.”

The church is accepting checks directed to help their effort in Lebanon. Click here for more information.

The church is also planning a community prayer service Sunday at 11 a.m., and all are welcome.