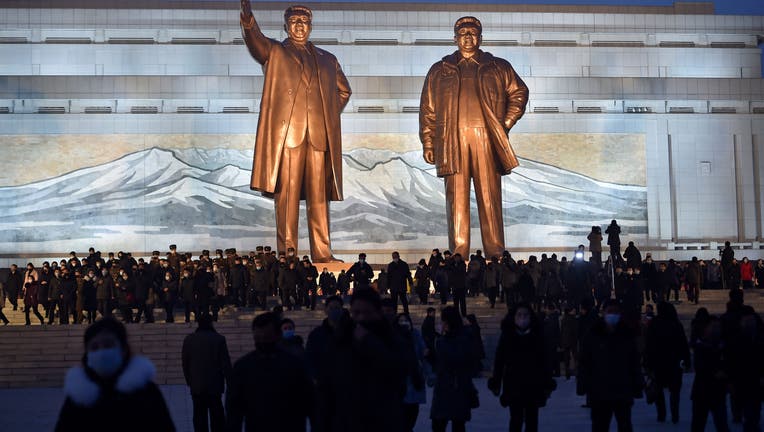 People come to pay their respects before the statues of late North Korean leaders Kim Il Sung and Kim Jong Il to mark the ten year anniversary of the death of Kim Jong Il, the father of current leader Kim Jong Un, on Mansu hill in Pyongyang on Decemb

SEOUL, South Korea (AP) - North Korea on Friday commemorated the 10th anniversary of former leader Kim Jong Il’s death with calls for greater public loyalty toward his son and current leader Kim Jong Un, who is struggling to navigate the country out of deepening pandemic-related hardships.

In his 10 years at the helm of North Korea since his father’s death, Kim Jong Un, 37, has secured the same absolute power enjoyed by Kim Jong Il and Kim Il Sung, the current leader’s grandfather and state founder. Despite massive economic shocks caused by draconian anti-virus measures and long-dormant diplomacy with the United States, North Korea shows no signs of political instability and few outside experts question Kim’s grip on power.

But the long-term stability of Kim Jong Un’s rule could still be questioned if he fails to work out steps to address the ongoing difficulties and improve public livelihoods, some observers say.

At midday Friday, as a siren blared for three minutes, North Koreans fell silent and bowed in respect for Kim Jong Il. Cars, trains and ships blew their horns, national flags were lowered to half-staff and masses of people climbed Pyongyang’s Mansu Hill to lay flowers and bow before giant statues of Kim Jong Il and Kim Il Sung.

During an outdoor ceremony, senior North Korean official Choe Ryong Hae called Kim Jong Il "the parent of our people" who built up the potentials for the North’s military and economic might. Under Kim Jong Un, Choe said North Korea's "strategic status" has been boosted and urged the public to "faithfully uphold" his leadership.

In an apparent echo of official propaganda, Pyongyang citizen Won Jong Rim also told the Associated Press Television News that "our great general (Kim Jong Il) went through so much hardship, pushing his way along such an arduous path, to build a paradise here, achieving what the people want."

On previous anniversaries, Kim Jong Un paid respect at a mausoleum where the embalmed bodies of his father and grandfather lie in state. But state media didn't say whether he went there this year too.

Kim Jong Il’s 17-year rule was overshadowed by a famine in the 1990s that killed hundreds of thousands of people and international isolation over his nuclear ambitions. North Korea’s economy had reported a slight yet gradual growth for the first several years of Kim Jong Un's rule. But the coronavirus pandemic, mismanagement and U.N. sanctions following Kim's nuclear and missile tests have taken their toll.

North Korea’s trade with China, its biggest trading partner and an economic pipeline, shrank by about 80% last year before it plunged again by two-thirds in the first nine months of this year. Last year, the North’s economy suffered its biggest contraction since 1997 while its grain production also dropped to its lowest level since Kim took office, according to South Korean government estimates.

Kim refuses to return to talks with Washington and Seoul. He has called for building a stronger, self-reliant economy while keeping tough virus restrictions including two years of border shutdowns. Analysts say Kim fears that his country’s broken public health system could not afford a major virus outbreak — though he maintains a questionable claim that North Korea is coronavirus-free.

"Unless North Korea accepts offers for denuclearization talks with the U.S., it cannot stay away from powerful international sanctions. Without international cooperation, North Korea must continue to seal off its borders due to concerns about the spread of COVID-19. And this is a North Korean dilemma," analyst Cheong Seong-Chang at the private Sejong Institute in South Korea said in a recent paper.

The North’s advancing nuclear arsenal is the core of Kim’s rule, and he’s called it "a powerful treasured sword" that thwarts potential U.S. aggressions.

During his 10-year rule, North Korea has performed 62 rounds of ballistic missile tests, which are banned by multiple U.N. Security Council resolutions, according to Seoul’s Unification Ministry. The number is compared to an estimated nine rounds of tests during Kim Il Sung’s 46-year rule, and 22 rounds during Kim Jong Il’s 17-year rule. Four of the North’s six nuclear tests and its three intercontinental ballistic missile launches all occurred under Kim Jong Un’s rule.

"North Korea marked the 10-year memorial of Kim Jong Il with public ceremonies and state propaganda. More significant will be Kim Jong Un’s attempt, after a decade in power, to map out a credible path for post-pandemic diplomacy and economic recovery," said Leif-Eric Easley, a professor at Ewha University in Seoul.