Members of the media were allowed inside Globe Life Field for the first time since a fire broke out last Saturday.

ARLINGTON, Texas - Members of the media on Wednesday were allowed inside Globe Life Field for the first time since a fire broke out last Saturday.

Crews have cleaned up the damage within the last few days and there were no visible traces of the fire inside. But, workers still have a tight construction deadline to meet, needing to finish by March.

Another roofing crew had to be brought in to help clean up and repair the damage from Saturday’s fire. But despite the setback, Rangers officials said Wednesday the new ballpark is about 89 percent complete.

Construction officials say supplies stored on the sub roof below caught fire due to sparks from welding equipment and damaged metal decking and 2,000 square feet of the roof area.

“Unfortunately we were doing work up above it, some slag fell off a welding machine, fell down into a container, caught fire and when it went, it went,” said Greg McClure, Sr. Vice President - North Texas region, Manhattan Construction. 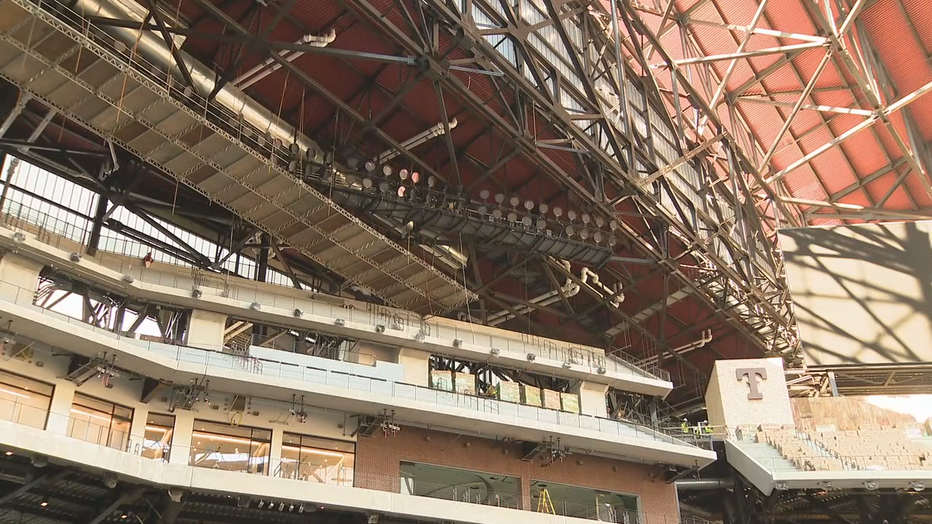 Federal safety inspectors with OSHA were also on site this week conducting interviews for their investigation.

“We’ve already torn off that portion of the roof and have got temporary measures back in place so we don’t have any leaks and we’ll have the brand new roof put back in within a couple of weeks. By the first of the year, pretty much, we’ll have it ready to go,” said McClure.

Rangers officials said they are continuing on their construction timeline full steam ahead, with about 1,600 workers on site every day.

“Obviously there’s some repair work that will need to take place. But it will not slow down as you can tell with the rest of the project, which is not slowing down,” said Rob Matwick, Exec. VP of Business Operations, Texas Rangers.

About 75 percent of the roofing work over the retractable roof is done. By the end of this week, 31,000 of the ballpark’s seats will be on site.

“Until we walk through that door on the first day, I don’t think there’s any of us that really will be totally comfortable. Again, there’s not reason to be concerned about completion, but we’re still working, we’ve got a lot to get done here over the next 75-100 days,” said Rob Matwick, Exec. VP of Business Operations, Texas Rangers.

The goal is to have this ballpark finished by March and there’s not much room for any delays. Chris Stapleton is scheduled to play March 14 and the Rangers have preseason games scheduled for the end of that month.