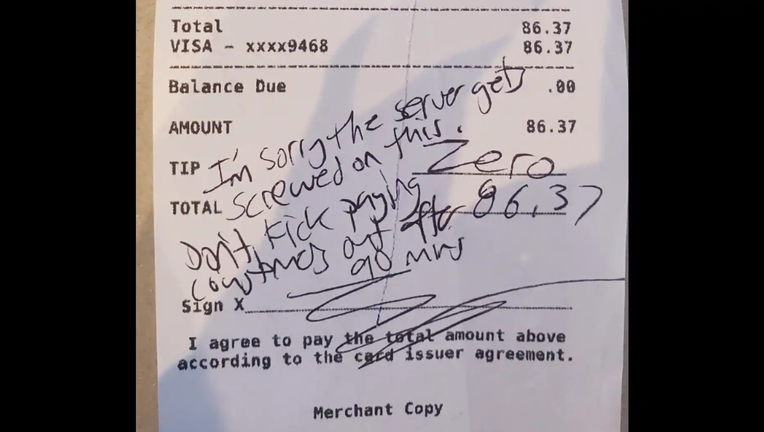 A customer at Glenbrook Brewery in Morristown, N.J. left this note and refused to tip because the restaurant has a 90-minute time limit on indoor dining because of state COVID-19 regulations. (Conor Boucher)

NEW JERSEY - Residents of Morristown, N.J. have rallied to support a server at a local restaurant and brewery after she was denied a tip last week.

Like many restaurants during the pandemic, Glenbrook Brewery – which opened only five weeks ago – has instituted a 90-minute time limit for dine-in customers. However, one customer apparently didn’t like that policy and decided not to leave a tip on his $86.37 meal on Friday night.

In a note he left on his receipt, the patron wrote: "I’m sorry the server gets screwed on this. Don’t kick paying customers out after 90 minutes."

Heath Traver, Glenbrook’s co-owner and head brewer, told Fox News the policy is in place as a way to keep the restaurant’s wait time down while following state coronavirus guidelines. Currently, New Jersey requires that indoor dining be limited to 50% capacity, with parties of eight or less and tables all six feet apart.

"We can't fit 50% in just because of those limitations," Traver told Fox. "We’re very limited in our seating capacity and that – with a pretty high demand to see us – is causing lines and we’re just trying to deal with it the best we can in the most fair way we can."

Traver added that the restaurant only asks guests to leave after 90 minutes when other people are waiting to be seated.

"If there's no line, then you can hang out as long as you want," he stressed.

However, on Friday, there was a line. One of Glenbrook’s servers, who only gave her first name as Beth, told Fox News that as one of her tables was getting close to the 90-minute mark, she let them know they would have to leave soon.

"They kind of fought back with me a little bit and they just decided, ‘you know what, we’re just going to leave,‘" Beth said. After the people paid, she said they asked to speak to the manager. That’s when she saw the customers’ note.

"When I walked over to clear their glasses, I saw the check and I saw what he wrote and I was just like, oh my god," the server said. "You keep moving. It happens to everybody all the time, unfortunately in this business... Some people are great. Some people, you know, it is what it is."

Darren Cregan, Glenbrook’s co-owner and creative director, also told Fox News that the taproom manager, Conor Boucher, even asked the customer if the beer and service were satisfactory and the customer said yes. He just didn’t like the time limit.

However, word of the customer’s rude note got around and a picture was posted on Facebook on Saturday by another bar owner nearby.

Since then, the story has gone viral.

"It's all sort of incredibly unbelievable,"  Beth said of the overnight hype.

In fact, the Morristown Stimulus Plan –a Facebook group founded last year as a way to support local businesses and restaurants – raised about $1,700 for Beth to make up for missing out on her tip on Friday, Today reported.

Beth, who is also a registered nurse, is working at Glenbrook to help pay for her doctoral program. But instead of using the $1,700 for school or a vacation, the server said she plans to give back to the community.

Moving forward, Beth said she’ll take out what should have been a 20% tip from the customer on Friday and split it with her co-workers who were working that night. Traver said the staffer plans to spend the rest of the money on things like meals from local restaurants to give to health care workers.

"I just hope that everything that has come to light out of this story just does some good for us and for the rest of the businesses in Morristown," she added. "It's really important to turn a situation into something positive. So I'm just hoping that it kind of spreads the awareness to other restaurants and places that might be dealing with the same problems."