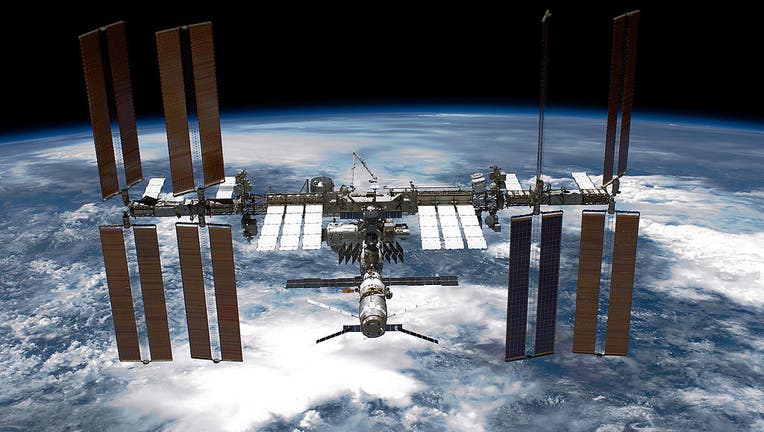 In this handout provided by National Aeronautics and Space Administration (NASA), back dropped by planet Earth the International Space Station (ISS) is seen from NASA space shuttle Endeavour.

LOS ANGELES - Floating in zero gravity more than 200 miles above Earth, Kate Rubins, an astronaut aboard the International Space Station, posted a selfie levitating in front of a voting booth in space.

“ISS VOTING BOOTH” read a sign posted to a small capsule where Rubins cast her ballot for the upcoming 2020 election.

With the COVID-19 pandemic increasing the amount of absentee ballots for the 2020 election, NASA is proving nowhere is too far to exercise your right to vote.

“Americans exercise their right to vote from all over the world, and for November’s election, few ballots will have traveled as far as those cast by NASA astronauts living and working aboard the International Space Station,” NASA wrote in a news release on their website.

Astronauts currently spend up to six months on mission at the International Space Station, which could mean that some votes will be cast from outer space.

“I think it’s really important for everybody to vote,” Rubins told the Associated Press. “If we can do it from space, then I believe folks can do it from the ground, too.”

Rubins is currently on a six-month stay aboard the station.

How to cast your 2020 ballot without using USPS

Here are some options for those who find themselves wary of the U.S. Postal Service’s ability to deliver their ballot on time.

“It’s critical to participate in our democracy,” Rubins said. “We consider it an honor to be able to vote from space.”

Like other forms of absentee voting, voting from space starts with astronauts filling out a Federal Postcard Application (FCPA). By completing it ahead of their launch, crew members can inform election officials that they will be voting from space.

Since most astronauts move to Houston for their training, they opt to vote as Texas residents. But since astronauts come from all over the world, they could also choose to vote in their home states.

A 1997 Texas law allows U.S. astronauts to vote from space. A secure electronic ballot is forwarded to the astronauts by Mission Control in Houston and returned by email to the county clerk.

Once the FCPA is approved, the county clerk who manages elections in the astronaut’s home county sends a test ballot to NASA’s Johnson Space Center in Houston. The space station computer is used to test whether they can fill it out and send it back to the county office.

If successful, a secure ballot is sent by the mission control center to the voting crew member. Astronauts access the secure ballot using member-specific credentials sent in an email by the county clerk.

The astronaut will cast their vote and the completed ballot is delivered back to the county clerk’s office by 7 p.m. local time on Election Day.

NASA astronauts have voted from space before. Four years ago, astronaut Shane Kimbrough filed his ballot during his stay aboard the ISS.

Before launching on a four-month mission, Kimbrough said it was going to be special being able to say, “I voted from space.”