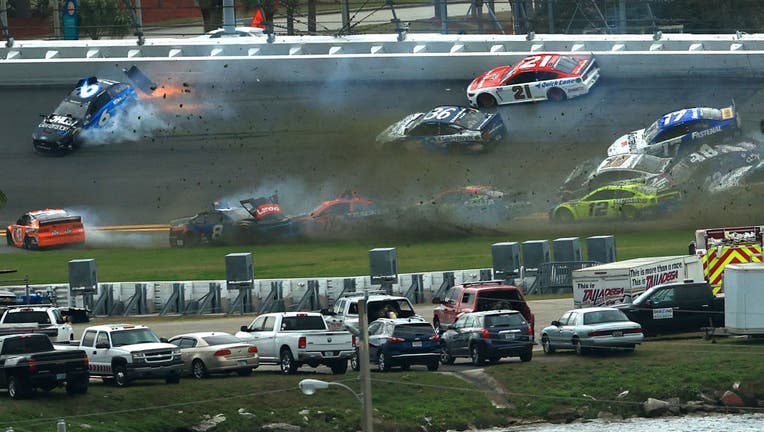 DAYTONA BEACH, Fla. - Sixteen cars, including one driven by racer Ryan Newman, were involved in a major crash during the Daytona 500.

The big one hit only 14 laps into the Daytona 500, triggered when Aric Almirola turned into pole-winner Alex Bowman and started a 16-car pileup.

Christopher Bell pushed Almirola and forced the Stewart-Haas Racing driver to bobble as he tried to correct the car. Among the cars that sent cars spinning and flying through the mud and getting torn up include Martin Truex Jr., Erik Jones, Jamie McMurray, Ryan Blaney, William Byron, Ryan Newman and Kurt Busch.

In video posted by NASCAR, some cars were seen crashing into the wall while others were pushed into the grass.

It was one year ago that the world watched as Newman's No. 6 race car crashed into a wall during the last lap of the Daytona 500, sending the car flipping into the air and catching fire as it landed on its roof.

This time, he walked out of the car, appearing to be uninjured.

Just minutes later, the race was stopped by lightning and fans who had been socially distanced in the grandstands instead had to seek shelter in the crowded concourse.

Just before 5 p.m., the Speedway tweeted that "the weather hold has lifted, and normal operations are resuming. Track drying is currently underway."