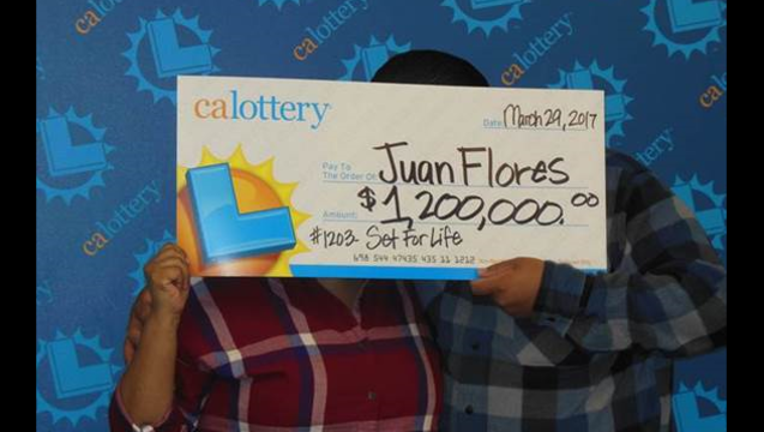 SACRAMENTO, Calif, (FOX 11) - A Los Angeles resident hit it big with a California Lottery Scratchers ticket he was given as a Christmas gift.

Juan Flores says he always asks his family for Scratchers tickets at the holidays, and this past year his sister-in-law gifted him a ticket as she had in previous years.

He'd never won any large amount of money playing the Lottery, so Flores was shocked when he learned his $2 Scratcher ticket was a winner!

His ticket won the top prize of $1.2 million.

“I was screaming my lungs out! The next day I couldn’t even talk. I had a sore throat and everything,” Flores told the California Lottery.

Flores says his family didn't believe him at first because he often tries to trick them into thinking he's won.

His sister-in-law says she bought two Set for Life Scratchers tickets in late December 2016-- one for herself and one for Flores.

She says she has no hard feelings about not getting the winning ticket, "I was so happy for Juan. I was crying, hugging, jumping. He’s a really good person and he deserves it!”

And it sounds like Flores intends to share some of his winnings with his sister-in-law and the rest of the family.

He says he wants to take his family on a vacation to Hawaii and treat them to "a party bus and massages."