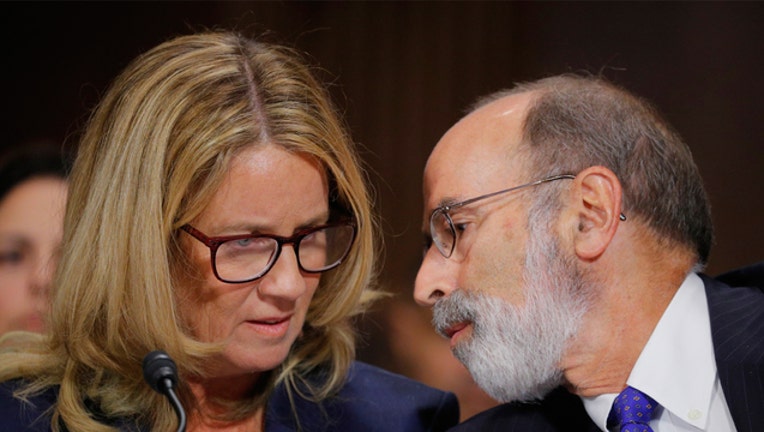 WASHINGTON - Lawyers for two women who accuse Supreme Court nominee Brett Kavanaugh of sexual misconduct say they fear the FBI is not conducting a thorough investigation, as Republican leaders steer toward a decisive vote on the nomination this week.

Attorneys for Christine Blasey Ford, who says she was sexually assaulted by Kavanaugh at a party when they were teenagers, wrote a letter to FBI Director Christopher Wray asking why the FBI hasn't contacted their client after she offered to cooperate in the FBI's reopened background investigation of Kavanaugh.

Also Tuesday, an attorney for another accuser, Deborah Ramirez, said he's seen no indication that the FBI has reached out to any of the 20 people who Ramirez told them may be able to corroborate her account that Kavanaugh exposed himself to her when they were Yale freshmen. The attorney, John Clune, said Ramirez was interviewed by the FBI on Sunday and provided agents with the witnesses' contact numbers.

Clune said he is concerned that the bureau "is not conducting — or not being permitted to conduct — a serious investigation."

Demonstrating that the investigation is credible is crucial as the White House and Senate Republican leadership look to win the support of several wavering senators — including three Republicans — who will determine whether the 53-year-old conservative judge is confirmed to the lifetime post.

One Republican official said he'd been told it was possible the FBI investigation could be completed as soon as Tuesday night or Wednesday morning, but it remained unclear. The official revealed the private conversations only on condition of anonymity.

Senate Majority Leader Mitch McConnell told reporters that "I can tell you with certainty" that the FBI report will be finished and the Senate will vote this week, though he didn't specify when. Underscoring the GOP effort to vote on Kavanaugh quickly — and stuff a cork on the chances for fresh allegations to emerge — he said "it shouldn't take long" for lawmakers to read that report.

"That will not be used as another reason for delay, I can tell you that," he said. Because of procedural steps, a final confirmation vote was unlikely until late in the week, perhaps over the weekend.

Senate Minority Leader Chuck Schumer, D-N.Y., said he wants senators to receive an FBI briefing on its findings at least 24 hours before the chamber takes its first procedural vote on Kavanaugh, which could be midweek.

McConnell has denounced Democrats, who have questioned Kavanaugh's truthfulness and temperament, for hurling "mud and muck" at the judge.

In a sign of their hardening stance, Republicans began to aim the credibility questions at Ford.

In a letter Tuesday night, the chairman of the Senate Judiciary Committee pressed Ford to turn over more information to support her claim and accused her lawyers of "withholding material evidence." Sen. Chuck Grassley repeated his request for notes from Ford's therapy sessions, details of her communications with The Washington Post and any recordings of her taking a lie detector test.

The senator said he is requesting the recordings because the committee has obtained a letter that "raises specific concerns" about the reliability of Ford's polygraph test. In the statement, a man who says he is Ford's former boyfriend says he saw Ford, a psychology professor, coach a friend on how to be less nervous during a polygraph examination.

If true, the claim could contradict testimony Ford gave last week, when she told senators she had never given tips or advice to anyone taking a lie-detector test.

A representative of Ford's legal team had no immediate comment.

A remark by President Donald Trump, who nominated Kavanaugh, spotlighted the gulf between #MeToo-era voters who've rallied against sexual abuse and conservatives who say the nominee is entitled to a presumption of innocence against uncorroborated allegations.

"It's a very scary time for young men in America when you can be guilty of something that you may not be guilty of," Trump said at the White House.

When Trump ordered the FBI investigation last week under pressure from a handful of Senate Republicans, he set a deadline of this Friday for the probe's completion.

Details were scant about precisely who the FBI was interviewing and the scope of the probe, but agents are known to have interviewed at least four people.

They include Mark Judge, who Ford has said was in the bedroom where, she says, a drunken Kavanaugh sexually attacked her at a 1982 high school gathering. Also interviewed were two other people Ford said were present but in a different room: Patrick "P.J." Smyth and Leland Keyser. Judge, Smyth and Keyser say they don't recall the incident described by Ford.

Kavanaugh has denied the accusations by Ford and Ramirez and those by a third woman, Julie Swetnick, who has alleged she was victimized at a party attended by Kavanaugh friends.

McConnell singled out Swetnick's accusations, for which he said "there conveniently happened to be zero witnesses." She is represented by Michael Avenatti, whom McConnell called a "tabloid lawyer." Avenatti also represents adult-film actress Stormy Daniels in her claim that Trump paid her for silence about an alleged 2006 affair.

One undeclared senator, Jeff Flake, R-Ariz., expressed concerns about Kavanaugh's "sharp and partisan" responses to Democratic senators during last week's gripping confirmation hearing at which the nominee and Ford gave opposing accounts. A fuming Kavanaugh sparred frequently with Democrats, responding to a question by one about whether he'd ever blacked out while drinking by shooting back, "Have you?"

"We can't have this on the court. We simply can't," Flake said at an event sponsored by The Atlantic magazine.

Two other undeclared senators, Lisa Murkowski, R-Alaska, and Susan Collins, R-Maine, said they are satisfied with the scope and pace of the FBI investigation. But asked about McConnell's pledge to move forward with a vote this week, Murkowski told The Associated Press that McConnell "talked about a vote last week, too."

Collins, who was riding with Murkowski on a Senate shuttle, told her colleague, "Good answer."

Meanwhile, a report released Tuesday by police in New Haven, Connecticut, says Kavanaugh was accused of throwing ice at a man during an altercation at a bar while in college. It comes as Democrats have questioned whether he has been forthright about his drinking habits in his youth.

Kavanaugh was questioned after the 1985 altercation but wasn't arrested. The report says 21-year-old Dom Cozzolino told police that Kavanaugh threw ice at him for "some unknown reason." Cozzolino said he then got hit on the ear with a glass.

The White House noted that Kavanaugh wasn't arrested or charged, and mocked the incident as irrelevant.