Jordan Edwards' memory lives on in the hearts and minds of Mesquite students and educators.

MESQUITE, Texas - Jordan Edwards' memory lives on in the hearts and minds of Mesquite students and educators.

Senior Night on Friday at the Mesquite High School football game included a tribute to Edwards and his family.

Jordan would likely be a starting defensive back on the playoff-bound Skeeters if he hadn't been shot and killed by a police officer two and a half years ago. The officer was convicted of murder.

Senior Night is a big deal for players and their families. While he is no longer here, Jordan Edwards would have been a senior this season. His family says his death was not in vain.

Jordan was a standout freshman football player when he was shot and killed. Right after his death, his coach and teammates at Mesquite High turned his locker into a shrine. Every year since, they made sure Jordan still had a locker with his number 11 jersey.

Jordan would have joined his teammates for Senior Night on Friday. Still being present in the hearts of his teammates, the school honored him in his absence.

FOX 4 spoke to Jordan’s parents as they waited in line with the other seniors and their parents. 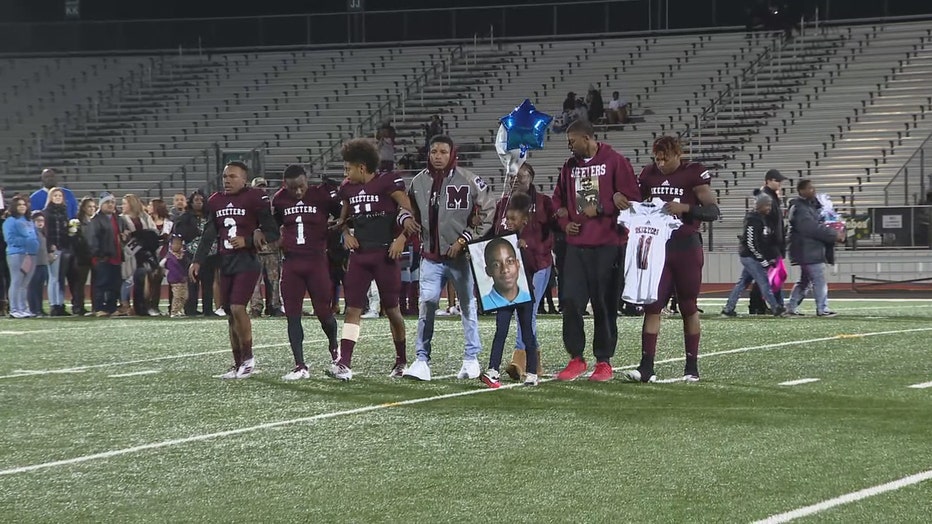 On April 29, 2017, Jordan was a passenger in a car leaving a party where Balch Springs police were called to investigate underage drinking. The officers reported hearing gunfire.

Officer Roy Oliver fired his rifle multiple times into the car. Jordan was killed. Oliver was convicted of murder and sentenced to 15 years in prison.

Mesquite's head coach Jeff Fleener has been there for the Edwards family through it all. He even testified at the trial.

“They surprised me with this today. The company that makes our letter jackets made this for you guys to have,” he told them.

As his name was called, the Edwards family and others were cheerful but overcome with emotion.

On the field, Jordan’s teammates once again played with heavy hearts.  His initials were on their helmets and never forgotten from their hearts and minds.

“Everyone will remember him,” Charmaine said. “Unfortunately, the circumstances is kind of different, but they still remember who he is.”

Fleener said his players have showed a lot of toughness over the last couple of years. He says they will never forget Jordan’s short life.