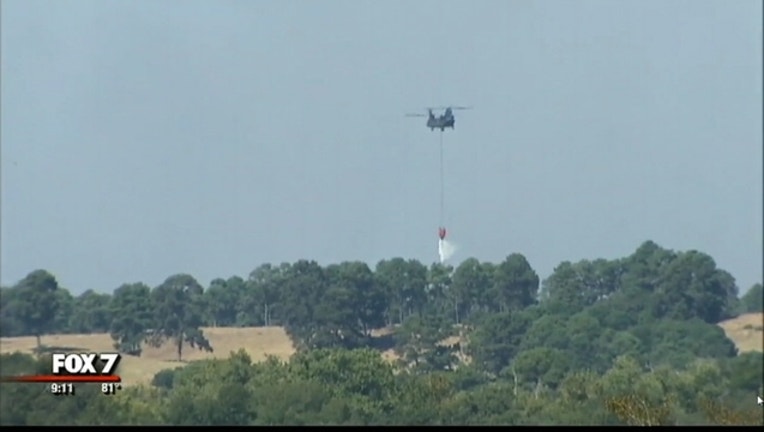 SMITHVILLE, Texas (AP) — Crews fighting a raging Central Texas wildfire that has consumed about three dozen homes over 6 square miles are being helped from the air.

The Texas A&M Forest Service has called in a DC-10 jet tanker that can drop close to 12,000 gallons of retardant at a time over a swath three-fourths of a mile long and 500 feet wide. It is also able to divide its load into five separate drops.

The Very Large Air Tanker is to be available Friday morning to fight what has come to be called the Hidden Pines Fire in Bastrop County, about 40 miles southeast of Austin. A smaller single engine air tanker dropped retardant on the area Thursday. The same area was scorched four years ago by a devastating blaze that wiped out 1,600 homes and killed two people.

Residents of about 400 homes have been advised to evacuate since the fire began Tuesday, officials said. The cause of the blaze is unknown. No deaths or injuries have been reported.

Bastrop County officials hope the arrival of a cool front will help slow the advance of the fire. No rain is in sight to extinguish the latest flare-up that has threatened hundreds of homes, but calming and shifting winds pushed the blaze away from populated Bastrop County subdivisions on Thursday.

"It's been a good day for firefighting," Bastrop County Judge Paul Pape said.

About 25 percent of the fire was contained late Thursday after the blaze quadrupled in size in one day. The worst was near the rural ranching community of Smithville, where a sign proudly announces the town as the home of the 1998 Sandra Bullock film "Hope Floats." But the damage so far has paled in comparison to the 2011 wildfire that destroyed nearly 10 times as much ground.

Smoke from the wildfire has wafted more than 40 miles east into downtown Austin. Dozens of closed streets reopened by sundown Thursday, and county officials expressed optimism that conditions would remain favorable for firefighters overnight.

The fire was being fueled partly by hot, dry weather. Temperatures approached 93 degrees around Austin on Thursday, flirting with a record high for mid-October. Less than 2 inches of rain have fallen in Bastrop County since July. Highs are expected to drop into the 80s starting Friday, but humidity will remain low, National Weather Service meteorologist Cory Van Pelt said.

About 400 homes and businesses were without power Thursday, and Buescher State Park will be closed through Sunday due to the fire threat. On a list of burned houses that county officials posted inside a gymnasium in Smithville, Dennis Moninger's address was near the top of the page. He said the fire also destroyed his brother's house nearby.

"He saw the fire jump across the street and onto his property," Moninger said. "It jumped from treetop to treetop."