Officials say inmates at a St. Louis jail have set fires, broken out windows and thrown things from fourth-floor windows in the latest disturbance over conditions amid the coronavirus pandemic. (Credit: Darnell Singleton and Traci McDaniel via Storyful)

ST. LOUIS (AP) - Inmates at a St. Louis jail set fires, broke out windows and threw things from fourth-floor windows Saturday in the latest disturbance over concerns about the coronavirus pandemic and restrictions that have limited visits and stalled court proceedings, officials said.

Dozens of law enforcement officers were working to bring the situation under control at the St. Louis City Justice Center, a spokesman for Mayor Lyda Krewson, Jacob Long, said. About 115 inmates were involved, said Long, who described the group as "extremely violent and noncompliant" in an interview with The Associated Press. The disturbance began around 3 a.m., he said.

Some people gathered outside the downtown jail. Video posted on social media showed inmates holding signs on an upper floor while gathered at three windows that had been smashed out. Firefighters were using a hose to put out blazes.

"It is hard to see from the outside, of course, but the sheriff’s department and the police department have been here and are upstairs working to bring this under control," Long said.

In late December and early January, dozens of inmates were transferred out of the St. Louis City Justice Center after two separate disturbances. Officials have said inmates were upset about conditions in the jail amid the pandemic.

Although there were no confirmed cases of COVID-19 among the 633 people jailed at the St. Louis Justice Center as of Friday, tensions have been simmering. 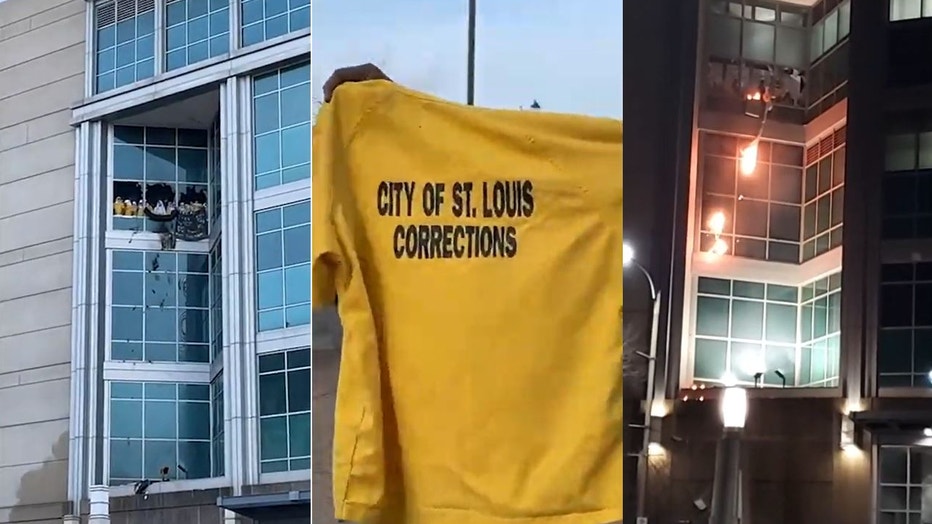 Officials say inmates at a St. Louis jail have set fires, broken out windows and thrown things from fourth-floor windows in the latest disturbance over conditions amid the coronavirus pandemic. (Credit: Darnell Singleton and Traci McDaniel via Storyf

"I imagine they are under the same amount of stress due to COVID restrictions like the rest of us are," Long said. "Courts haven’t been hearing cases in the 22nd Judicial Circuit. Their family visits have been restricted. But also they are acting out and that is the current situation."

Long anticipated that 50 or 60 more inmates would be transferred out of the jail and into the St. Louis Medium Security Institution, also known as the workhouse, once the latest disturbance is brought under control.

Activists have protested conditions at the workhouse for years, but plans to close it have stalled, with backers of keeping it open saying it provides a way to space out inmates amid the pandemic.