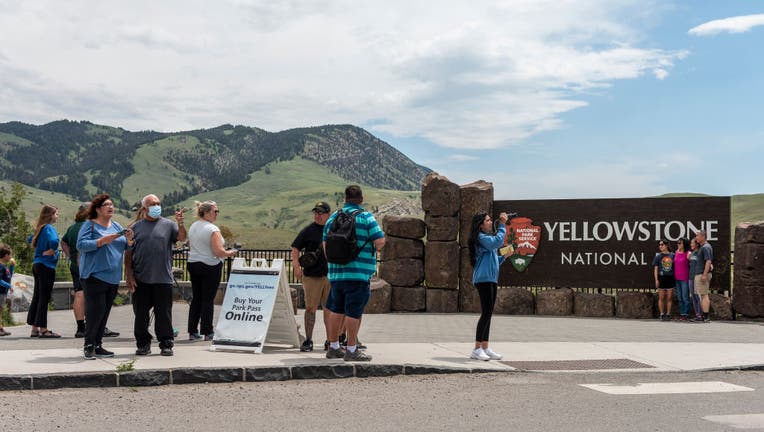 GARDINER,MT - JUNE 08: Visitors arrive at the north entrance to Yellowstone National Park on June 8,2021. Yellowstone is seeing a record number of visitors since all entrances were open for the 2021 tourist season. (Photo by William Campbell/Getty Im

BOZEMAN, Mont. - You’ll probably never be able to use it, but a non-profit is offering entry tickets to Yellowstone National Park that will be valid in 150 years, or 2172.

Yellowstone Forever, the national park’s fundraising and educational arm, is offering an "Inheritance Pass" with a $1,500 donation.

The organization said the pass is real and donors will also receive a complimentary entrance pass to be used next year. Donors must preserve the pass so that future parkgoers can present it. If it’s lost, park rangers said they can assist.

"It is our way of celebrating 150 years of Yellowstone National Park and to help preserve the park for the next 150 years," said Lisa Diekmann, president and CEO of Yellowstone Forever told the Billings Gazette.

The non-profit’s organizers said donations will go to current projects to help preserve the park, according to the website.

An elderly woman trying to take a photo of a bison at Yellowstone National Park ended up hospitalized after the animal gored her.

President Ulysses S. Grant signed the Yellowstone National Park Protection Act on March 1 1872, setting aside one of the world’s largest nearly intact natural ecosystems for the "benefit and enjoyment of present and future generations," according to the park.